'Palestinian self-determination not for sale': Protesters in US rally against normalisation

Hundreds gather outside the White House to condemn normalisation deals between Israel, Bahrain, and the United Arab Emirates The protesters marched on the streets just outside the White House, waving Palestinian flags and chanting 'Free Palestine' (MEE/Umar Farooq)
By
Umar A Farooq
in
Washington

As US President Donald Trump brought together leaders from Israel, Bahrain, and the United Arab Emirates to sign deals to establish diplomatic relations, just outside of the White House, hundreds of Palestinians, civil rights and advocacy groups gathered in protest of the occasion, accusing the leaders of ignoring the voices of Palestinians.

Coming together with waves of Palestinian flags, donning traditional keffiyehs, and some wearing masks with the words "Free Palestine", the demonstrators shouted slogans: "No hate, no fear, Bibi is not welcome here", and "Occupation is a crime, normalisation is a crime".

Despite the White House being fenced off, the demonstrators wanted all attendees at the ceremony to hear their voices, and know that despite the agreements being labelled as "peace deals", Palestinians will be put in more harm's way as a result.

"We're here obviously today because there can be no normalisation with Israel without Palestinians being at the table," Jinan Deena, national organiser for the Arab American Anti-Discrimination Committee, told Middle East Eye.

"These countries that are working to normalise with Israel are in fact harming the Palestinians more by signing these deals and coming out, and stating clearly, what their intentions are.

The rally was supported by a coalition of more than 50 organisations, including the ADC, the Council on American-Islamic Relations, Jewish Voice for Peace, and American Muslims for Palestine.

After gathering at Black Lives Matter Plaza - a street renamed during the aftermath of the George Floyd killing and subsequent protests - the protesters marched on the streets just outside the White House, carrying with them a gigantic Palestinian flag that stretched over an entire street block.

"They stole our capital, they keep on stealing our lands and it's not okay," said Mohammed Awad, a 13-year-old protester at the rally.

In a letter, the coalition said that "Palestinian self-determination and human rights are non-negotiable and not for sale", and they demanded "an end to Zionist Colonization of Arab/Palestinian land".

The protests coincide with similar ones taking place amongst Palestinians in the the Gaza Strip and the occupied West Bank on Tuesday, which Palestinian Prime Minister Mohammed Shtayyeh called a "black day" for the Arab World.

The 'open betrayal' of Bahrain and the UAE

Meanwhile, US Secretary of State Mike Pompeo on Tuesday said in remarks to the Atlantic Council that the Trump administration had essentially removed the Palestinian's "veto right" when it came to the Israeli-Palestinian conflict.

The secretary said that Palestinians had hindered any chance at peace and that they "could act in a way that prevented any Arab nation from engaging with the most important democracy in the Middle East". The deals make them the third and fourth Arab states to take such steps to normalise ties since Israel signed peace treaties with Egypt in 1979 and Jordan in 1994.

Taher Hazerallah, a director of outreach for American Muslims for Palestine, said that the deals allow for Israel to "invent a new reality" and "continue its ethnic cleansing of the Palestinian people at no political, economic or military cost".

"As for the UAE and Bahrain, their open betrayal of their Arab and Muslim brothers and their abject dismissal of one of the holiest places of the Muslim world has made it clearer than ever that these regimes do no represent their people and only play a reactionary, counter-revolutionary role in the region," he told MEE. 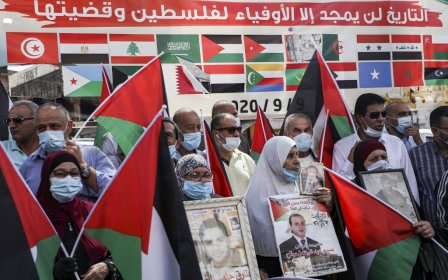 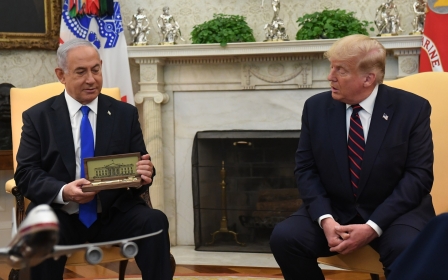