Mohammed al-Yemeni had been injured by sniper fire less than a fortnight ago, but continued covering battles in his hometown A Yemeni photojournalist was killed on Monday after being shot by a Houthi sniper in the flashpoint town of Taiz.

The photographer was killed in the eastern al-Dhabab suburb of Taiz – a number of other journalists were injured in the same incident.

Yemeni was previously injured by a sniper on 11 March, when he was shot in the thigh while covering clashes in the same area.

However, he continued to work – he wrote on Facebook on Monday morning that he was “going out to the battle again – pray for me”.

Friends and former colleagues paid tribute to the photographer on Twitter.

Mohammed AlYemeni @Mal_yemeni, another journalist killed while covering the war today in #Taiz where death is no longer news. #Yemen

Translation: Mohammed al-Yemeni’s body is in front of me now at the morgue in al-Rudha Hospital. All I can say in the face of this pain is that I won’t forget you.

The Committee to Protect Journalists has documented a spike in journalists and media workers being killed since the start of a grinding war between Houthi rebels and supporters of President Hadi, backed up by air strikes by a Saudi-led coalition.

At least 11 journalists and media workers are now known to have been killed since the war began.

The southern city of Taiz was held under a tight siege by Houthi rebels for months.

The siege was broken on 11 March when pro-government forces advanced, but residents of the city have told MEE that they are still at risk from mines, particularly in Dhabab.

Despite the breaking of the siege, areas of the city remain under Houthi control, and some residents have said they still fear returning to their homes. 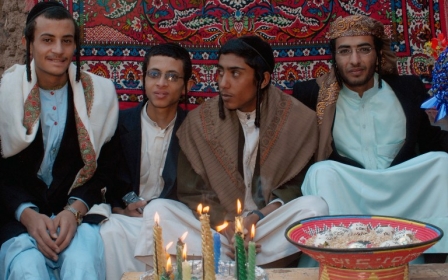