Protester dressed as MBS, complete with mask of his likeness, held up his "blood" soaked hands outside Saudi embassy in DC (MEE/Sheren Khalel)
By
Sheren Khalel

Outside Saudi Arabia's embassy in Washington DC, Martin Laffin, standing next to dozens of other protesters, holds a tattered sign with a list of demands for the US government.

His sign calls for Washington to hold Saudi Arabia's Crown Prince Mohammed bin Salman accountable for the murder of Jamal Khashoggi, to cancel all arms sales to Saudi Arabia and to end US support for the kingdom's involvement in the war in Yemen.

The sign was the same one he held in front of the White House almost a year ago.

Khashoggi, a Saudi journalist and US resident who wrote for the Washington Post and MEE, was killed on 2 October 2018 in Saudi Arabia's Istanbul consulate.

US President Donald Trump has strongly defended Saudi Crown Prince Mohammed bin Salman, who the CIA has said ordered the murder and dismemberment of Khashoggi. The Saudi government has vigorously denied his involvement.

"This time last year we were all at the White House decrying this horrific murder," Laffin told Middle East Eye after a news conference in front of Washington's Saudi embassy on Wednesday.

The news conference to commemorate the one-year anniversary of Khashoggi's murder was held by the Council on American-Islamic Relations (CAIR), anti-war group Code Pink, Justice for Jamal (#JusticeForJamal) and Nonviolence International.

During the event, one of the protesters dressed as Saudi Arabia's crown prince, sometimes known as MBS, complete with a mask of his likeness.

The protester covered his hands in fake blood and stood outside the embassy with his arms raised.

Laffin stood in a row of about two dozen protesters chanting slogans about MBS and the Saudi government, demanding the US government act.

Laffin said in his opinion, efforts in Congress to hold the Saudi government accountable have been "encouraging", but he is still waiting for the US government to find a way to bypass the Trump administration and halt all US weapons sales to Saudi Arabia.

In April, Congress was finally able to pass a resolution to end US support for the Saudi-led war in Yemen - sending it to Trump's desk for ratification - only have it knocked down by a presidential veto.

CAIR's director of government affairs, Robert S McCaw, said Congress has "taken the first steps", but that there is a long road ahead.

McCaw told MEE that Congress must continue to call on the Trump administration to release its findings from an investigation into the incident and to push for sanctions against MBS, and to halt US arms sales to Saudi Arabia as well.

Code Pink's cofounder, Medea Benjamin, said she has been surprised by US lawmakers' continued dedication to holding Saudi Arabia accountable.

"Congress has been surprisingly good on this - it's quite amazing - we would need a two-thirds majority to override the presidential veto, and that would be hard, but I think we should be trying for that," Benjamin told MEE.

In the meantime, Code Pink has put plans in place to go full-force with an effort to get a boycott against Saudi Arabia off the ground.

"Our call to boycott Saudi Arabia is not new, but we're expanding it," Benjamin said.

"Saudi Arabia is an extremely repressive regime, but earlier we didn't know what we could boycott because there aren't ... products the Saudis are selling to the US," Benjamin said.

"But now we realise there are all kinds of products, because not only have the Saudis opened up for entertainment to come in, but there are so many businesses in the United States that are taking Saudi money, especially in the tech industry."

Benjamin said she hopes to see a full push for boycotts, divestments and sanctions against Saudi Arabia, similar to the BDS movement launched against Israel in the name of Palestinian human rights.

"This is a time to build up a strong campaign to make people feel ashamed with the Saudi government and to push them to sever those ties," Benjamin said.

Later on Wednesday, a vigil was to be held in front of the Saudi embassy, where people were to gather to honour Khashoggi's memory. Khashoggi
Khashoggi, one year later: 'A promise not yet fulfilled' 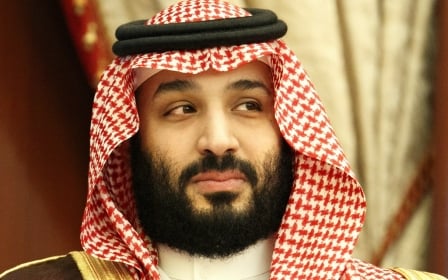 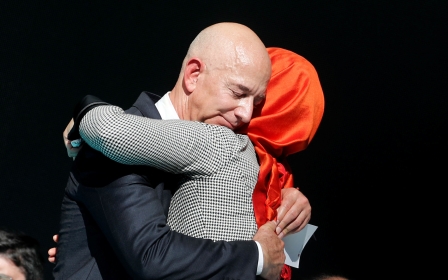 Khashoggi
One year on, Khashoggi's friends seek justice at the scene of his murder