'For Turkey even our children are terrorists,' say residents of decades-old camp south of Athens where refugees are left to run own affairs 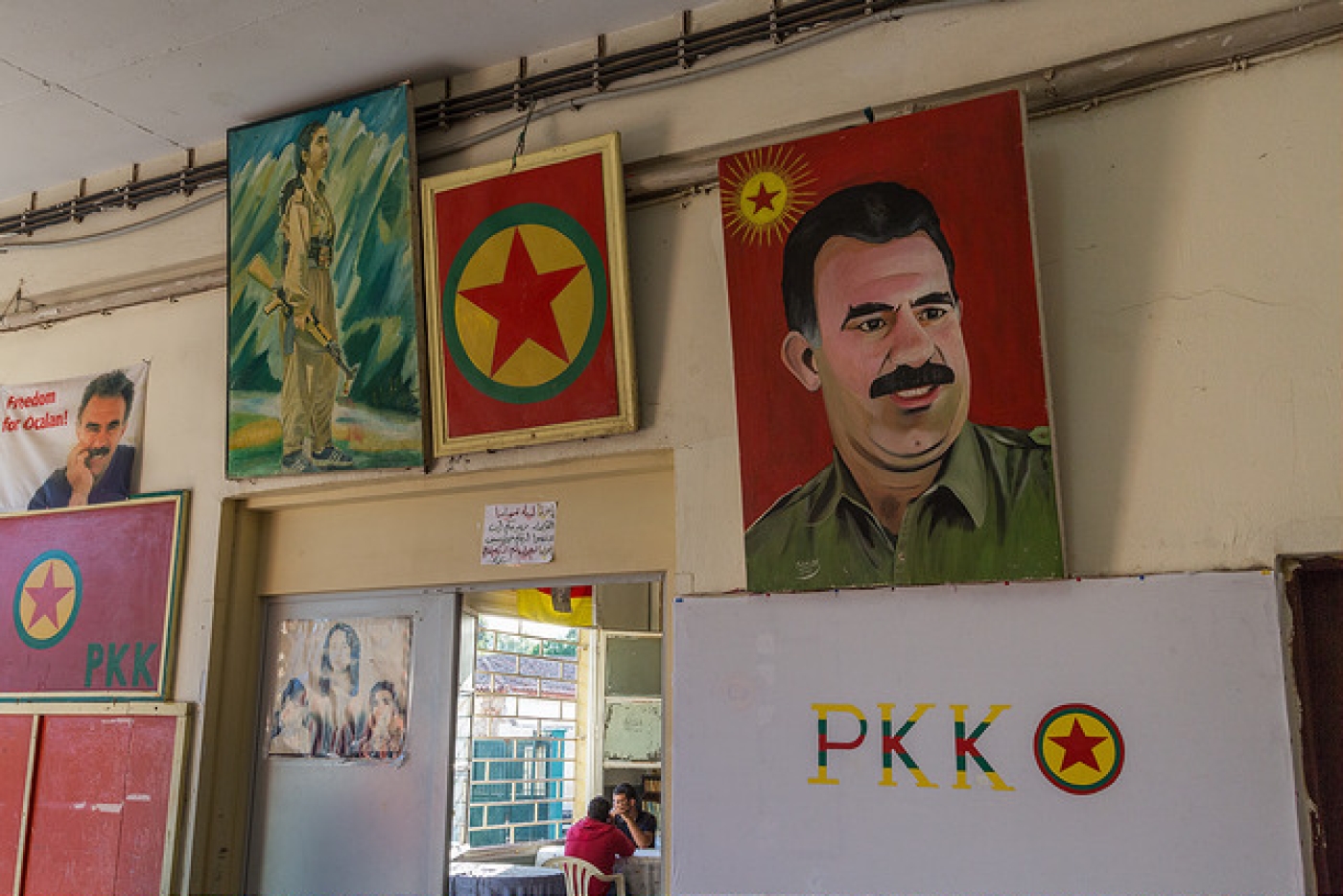 An image of Abdullah Ocalan, the imprisoned leader of the PKK, and other banners and flags expressing support for the PKK (MEE/Will Horner)
By
Will Horner

LAVRIO, Greece – It’s clear from first glance that Lavrio is a refugee camp with a difference. Outside fly the flags of Greece and the Hellenic Red Cross - but inside, camp residents have raised those of the Kurdistan Workers’ Party (PKK) and Abdullah Ocalan, the party’s imprisoned leader.

But perhaps more intriguing is that the camp, which contains only Kurdish refugees, is mostly run by residents themselves. A seven-person committee manages camp affairs, including access, accommodation and discipline, Middle East Eye learned after an exclusive visit earlier this month.

Camp residents meet weekly to discuss and vote on issues, according to Sahin Budak, a young Kurdish refugee from the Turkish city of Diyarbakir and a member of the leadership committee.

"We are like a big family here. All our meetings are about the camp and how we run it, as well as about Kurdistan and what happens there," he told MEE.

"I'm in charge of the camp and everyone listens to me - if I’m not here someone else takes my place [...]. Someone has to be in charge here so that there will not be chaos."

According to refugees in the camp the committee has roles focusing on security, food, accommodation, the camp's inventory, cleaning and women's issues. One of its members focuses on translation. The committee also resolves disputes and deals with discipline issues.

"If two people cause a problem we [the committee] learn what happened and then they both receive consequences, for example they have to clean the camp or guard the camp at night," said Sahin.

Kendal, another member of the committee from Turkey who declined to give his full name, explained that the refugees have their own rules in the camp.

"In the camp it is forbidden to drink alcohol or smoke or take drugs. We don't let people fight, minors are not allowed to get married and it is not allowed for men to hit their wives."

The refugee camp is one of Greece’s oldest and has been in operation for over 60 years. During the Cold War it was home to refugees fleeing the Soviet Union, but since the outbreak of the PKK-Turkey conflict in 1984 the camp has become dominated by Kurdish refugees from Turkey who have clearly made their mark on the place.

Inside the camp’s cafe (which is also run by the refugees) the walls are covered with photos of the "Sehiden", or "martyrs" – PKK militants who have died fighting the Turkish government, or more recently, Kurdish fighters from the Syrian-Kurdish YPG/YPJ killed during Syria's war.

The PKK has been waging an armed campaign against the Turkish state for decades in pursuit of self-determination for Kurds in Turkey. The party is considered a terrorist organisation by Turkey, NATO and the European Union.0

However the Syrian-Kurdish Democratic Union Party (PYD) and its armed units, the YPG and YPJ, which is closely associated with the PKK, is currently an ally of the US in the war against the Islamic State (IS) group in Syria.

One resident of the camp, Nevroz, 23, from Sirnak, Turkey, left his home to join the YPG and fight against IS. But he lost his left leg at the knee in the intense battle for the Syrian town of Kobane in 2015, in which Kurdish fighters dealt a symbolic victory against the militant group. After receiving a prosthetic replacement he made his way across Turkey to claim asylum in Greece.

Another resident, Ahmed, also 23, from Afrin in Syria, had his law degree at the University of Aleppo cut short by the conflict in the city, after which he left to claim asylum in Europe. In contrast to the pictures of PKK fighters which hang in his room (and pre-date his arrival) Ahmed said he was largely uninterested in Kurdish politics and merely wants the opportunity to complete his education.

The war in Syria and conflict in Iraq has seen a new wave of Kurdish migrants settle in the camp as they wait for their asylum claims to be processed. Compared to the Kurds from Turkey who settled in the camp in the 90s (some have lived there for as long as 20 years), these new arrivals appear to be less interested in politics.

Sahin Budak estimated that of the camps 350 residents less than a third were supporters of the PKK or YPG. The rest he said were “regular people”, farmers and workers who left when their lives were disrupted by conflict.

Sahin said he left Turkey because he was persecuted for his political beliefs.

"I’ve been in Greece for one year," he said. "In Turkey my life was bad and ruined and they didn't let me live my life there. I wanted my rights and I asked for a Kurdish state, this is why I left."

Kendal said his work for the People's Democratic Party (HDP), a pro-Kurdish political party in Turkey, led him to be arrested and imprisoned. After his release he crossed the Aegean Sea to Greece by boat during the height of the migrant crisis and made his way to Athens nine months ago.

The camp has been the subject of controversy since 1999 when the Turkish newspaper Hurriyet reported that Ocalan, who was captured that year in Kenya by Turkish security forces, told interrogators the Greek state had helped to arm and train its fighters in the Lavrio camp.

Ankara confronted Athens in 2013 in regards to what it called "terrorist activities" at the camp which was raided by Greek counterterrorism police later that year as part of an investigation into the Revolutionary People's Liberation Party/Front (DHKP-C), a Turkish Marxist-Leninist party, considered a terrorist group by Turkey, the US, UK and EU.

However Hurriyet reported that an extensive police search of the camp had failed to uncover "anything suspicious". Kurdish residents of the camp told MEE that the camp was not connected with the PKK.

"This camp isn’t a PKK camp or any other party’s camp," said Kendal. "This is a Kurdish camp, for Kurdish people. Turkey wants to close this camp because they say we're connected to the PKK. In Turkey's view all 400 people here are terrorists, for Turkey even our children are terrorists."

Giorgos Kyritsis, a spokesperson for the Greek government’s Coordinating Body for the Refugee Crisis Management, told MEE that "there is no PKK issue in the camp but if someone wants to peacefully declare his political identity he is free to do so in Greece".

When asked why there was no presence of Greek officials during MEE's visit he said that there were "some staffing issues in all the camps because the funding is still inadequate".

In regards to the absence of police officers he said "the authorities have a discreet surveillance, as with every camp with refugees and migrants. And in general there is a constant surveillance, visible or not".

Zefi Thanasoula, Head of Social Welfare Division of the Hellenic Red Cross said that the organisation operated a medical service, with a doctor and nurse as well as social and educational services, in the camp.

"Until August we had a contract, the Hellenic Red Cross, with the Ministry of Labour and the situation was very clear about our duties because there was a specific contract and a specific budget," she said.

"At the moment as Hellenic Red Cross we are not in contract even with the Ministry of Migration but for humanitarian reasons we continue to be present in the camp in order to assist the asylum seekers that reside in the centre". 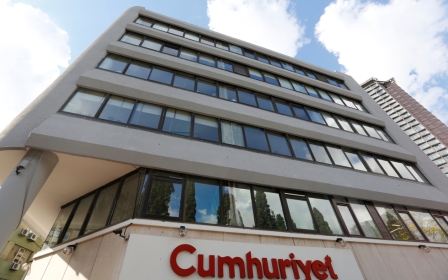 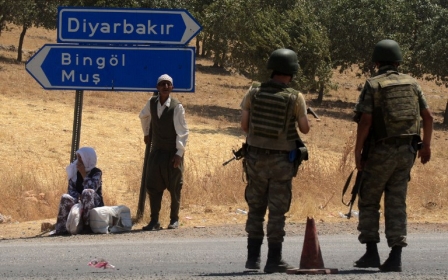 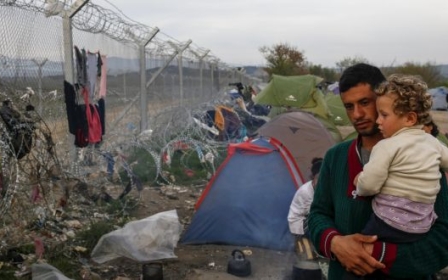