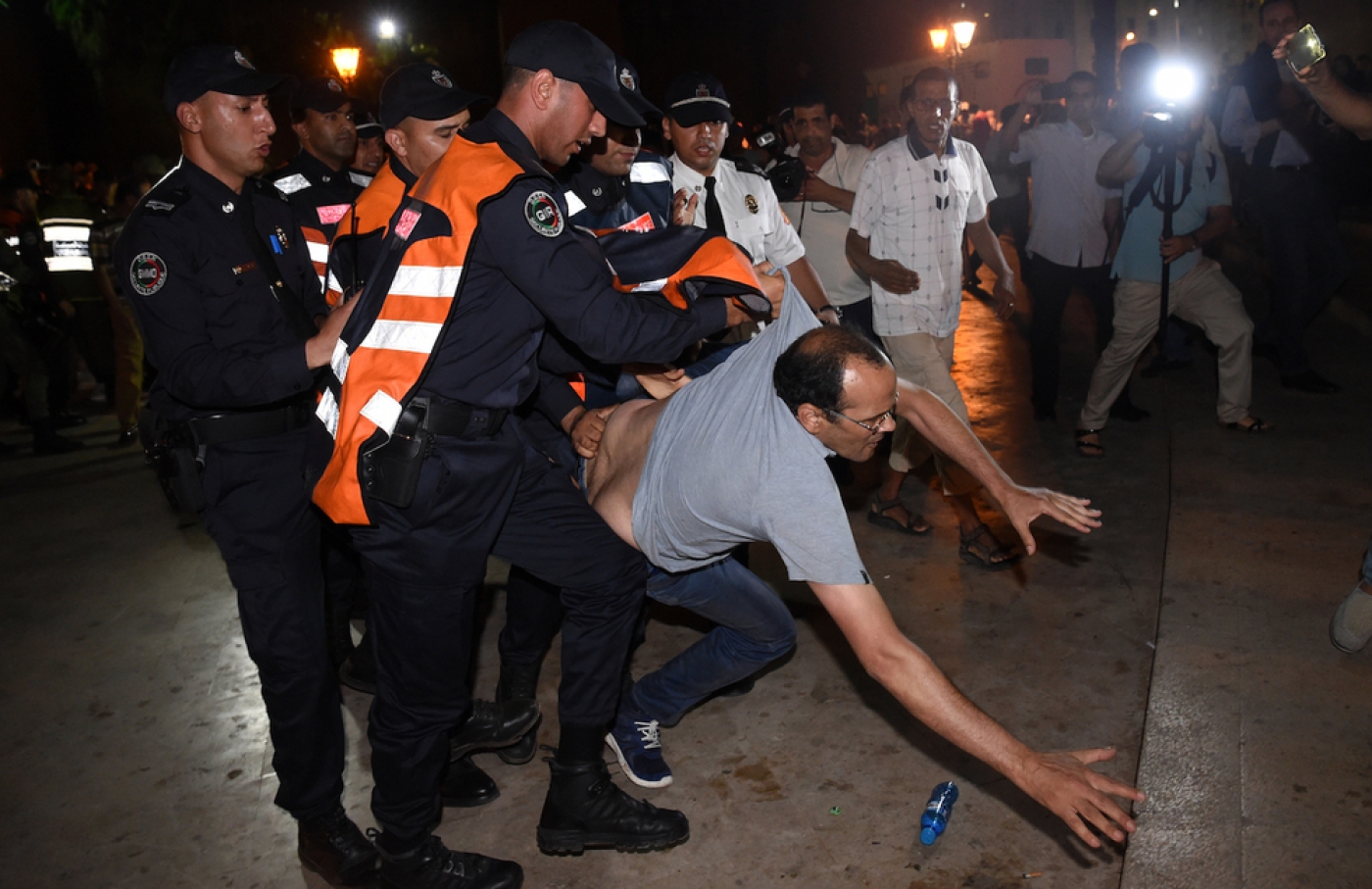 Security forces seize a demonstrator in Rabat on June 20, 2017 during a protest in support of the grassroots movement for the neglected Rif region (AFP)
By
AFP

Moroccan security forces have begun withdrawing from the restive northern cities of Al-Hoceima and Imzouren, which have been rocked by weeks of social unrest, officials and residents said.

A "gradual" pullback from both cities began on Monday at the request of King Mohammed VI, said the governor of Hoceima province, Fouad Chourak.

A resident of Hoceima, who spoke to AFP by telephone Tuesday, confirmed the withdrawal.

"Policemen have withdrawn from the central square in Al-Hoceima," the resident said. "Only a few policemen in civilian clothes are left."

Hoceima, the main port in the neglected northern Rif region, has been rocked by unrest since a fishmonger was crushed to death in a rubbish truck in October as he tried to retrieve swordfish confiscated for being caught out of season.

In the months since, demands for justice and anger over the region's perceived marginalisation snowballed into a grassroots movement centred on Al-Hoceima, but protests also spread to the neighbouring cities, including Imzouren.

The governor said he hoped demonstrators "will react positively" to the police withdrawal.

"Trust and security are linked... until the situation returns to normal," he said, adding that a positive response from protesters could pave the way for further measures by authorities to restore stability.

The pullback comes a week after clashes between security forces and demonstrators left nearly 80 police officers wounded, most of them struck by stones.

Authorities have arrested more than 100 people, including Nasser Zefzafi, the leader of the grassroots protest movement known as al-Hirak al-Shaabi, since the end of May.

Hirak has been demanding jobs, development, an end to corruption, and the release of all those arrested.

The government has responded to the unrest by relaunching a 2015 programme to improve the region's infrastructure, health facilities and education services by 2019.

A week ago the king told ministers of his "disappointment, dissatisfaction and concern" that a $670 million development programme for the Rif was behind schedule.

The Rif has long had a tense relationship with central authorities in Rabat, and it was at the heart of the Arab Spring-inspired protests in Morocco in February 2011. Migration
Boy travels from Morocco to Spain under bus