US Secretary of State Mike Pompeo met with Saudi Arabia's king and crown prince in Riyadh on Monday, and said they discussed accountability for the murder of Jamal Khashoggi, the war in Yemen and the detention of women's rights activists.

Washington's top diplomat told reporters in the Saudi capital that both King Salman and his powerful son Mohammed bin Salman "acknowledge that this accountability needs to take place" in regard to the assassination of Khashoggi.

"They talked about the process that is occurring inside their country, both the investigative process and the judicial process that is taking place," Pompeo said. "They reiterated their commitment to achieve the objective, the expectations we set for them."

Khashoggi, a prominent Saudi journalist and Virginia resident, was killed and dismembered in the Saudi consulate in Istanbul by a team of hitmen sent from Riyadh in October. The scandal that erupted following the murder has rocked the kingdom's rulers and their relationship with key ally the US.

The Trump administration has sought to shield Mohammed bin Salman from the fallout, despite the CIA concluding that the crown prince was almost certainly responsible for signing off on the operation.

In November, a Saudi source told Middle East Eye that Pompeo personally handed Riyadh's rulers a plan to help them overcome the pressure heaped on them by the assassination's exposure and its botched cover-up.

Earlier this month, the trial for 11 unnamed Saudi suspects opened in Saudi Arabia.

Turkey, on whose soil the murder took place and whose authorities leaked gruesome details of the killing to the media, has decried the kingdom's lack of transparency and lack of cooperation over the case. Saud al-Qahtani, a senior intelligence official who is said to be one of the murder's plotters, is reportedly free and still advising the crown prince.

Ahead of Pompeo's visit, a US official expressed scepticism over Riyadh's handling of the investigation.

"I don’t think from our point of view that the narrative emerging from the Saudis or the legal process is yet hit that threshold of credibility and accountability," the official said.

Another thorny issue covered by Pompeo, King Salman and Mohammed bin Salman, the secretary of state said, was the detention of women's rights activists. Pompeo said the Saudis assured him of due process.

"Their commitment was that the lawful judicial process would take place and they would do so quickly, and that they would continue down that path," he told reporters.

Human rights campaigners have also called on Pompeo to raise the plight of female Saudi activists detained in the kingdom.

Writing in the New York Times on Sunday, Alia al-Hathloul - whose sister, women's rights activist Loujain al-Hathloul, was arrested in May - called on the secretary of state to pressure the crown prince to release her sibling, who she said had "been held in solitary confinement, beaten, waterboarded, given electric shocks, sexually harassed and threatened with rape and murder".

"Even today, I am torn about writing about Loujain, scared that speaking about her ordeal might harm her," she wrote.

"But these long months and absence of hope have only increased my desperation to see the travel bans on my parents, who are in Saudi Arabia, revoked and to see my brave sister freed."

The US embassy in Riyadh tweeted that Pompeo and the crown prince had agreed on the need for a continued de-escalation in Yemen and adherence to agreements made last month at talks in Sweden to end a nearly four-year civil war between Yemen's Saudi-backed government and the Iranian-aligned Houthis.

"We talked about the fact that work done in Sweden on Yemen was good but we need both sides to honour those commitments. To date, the Iranian-backed Houthis have chosen not to do that," Pompeo told reporters.

The details of Pompeo's trip to Riyadh came as the State Department revealed he would be cutting his eight-day tour of the region short, to attend a family funeral.

Kuwait was set to be the last stop on Pompeo's eight-day tour of the Middle East, which was partly made to allay fears among allies that the US was withdrawing its influence from the region.

Pompeo's appearance in Cairo on Thursday was marked by a public denunciation of the foreign policy of former US President Barack Obama and a call for regional unity against Iran.

In an address entitled “A Force for Good: America’s Reinvigorated Role in the Middle East”, Pompeo told his invited audience at the American University in Cairo that the United States was embarking on “the real new beginning”.

He said the administration of Donald Trump had learned from the “mistakes” of its predecessor and would seek to drive "every last Iranian boot" from Syria.

Pompeo rebuked the Obama administration’s approach to the region as “misguided”, blaming it for the rise of the Islamic State (IS) group and for empowering Iran and its allies in Lebanon and Yemen.

He said that Obama, who he did not name, “grossly underestimated the tenacity and viciousness of radical Islamism”. Crime
Saudi man is accused of sexual assault in Canada, but his location remains mystery 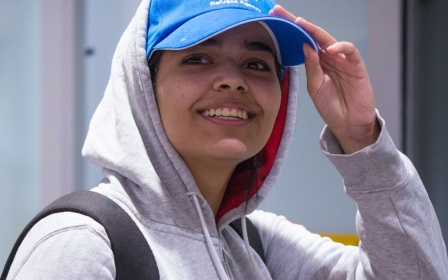