People living in Canada march against the decision to execute scores of people, including former president Mohamed Morsi, to death (AFP)
By
MEE staff

Solidarity demonstrations were held in various international cities over the weekend, after an Egyptian court sentenced to death former president Mohamed Morsi and scores of others.

The protesters chanted slogans such as “Silence kills” and “We want justice,” in the wake of the ruling, which saw Morsi given the death sentence over involvement in mass jail breaks during the 2011 uprising against long-serving president Hosni Mubarak.

In Israel, thousands of Israeli Arabs took to the streets on Saturday, setting off from the Galilee village of Kufr Kana.

Organisers said around 5,000 people attended the demonstration, which was organised by the northern branch of Islamic Movement in Israel.

A similar demonstration was held in Sudanese capital Khartoum.

Around 700 protesters set off from the city’s central Grand Mosque after afternoon prayers and headed for the UN’s Development Programme office.

Some burned photographs of Abdel Fattah al-Sisi, now president of Egypt who was army chief of staff when Morsi was ousted by the military.

Around 100 people gathered in New York on Friday to protest the ruling, gathering outside Egypt’s consulate in the city.

Many wore the orange jumpsuits used to mark out death row prisoners in Egypt, and chanted slogans calling for President Sisi to step down.

Protests were also held in Canada.

Within Egypt the judgement, which also saw high-profile academic Emad Shahin sentenced to death in absentia, have divided opinion in some quarters.

A prominent human rights activist on Saturday called for the court-sanctioned executions to be postponed for three years, fearing that carrying out the death sentences now would inflame an already tense situation in the country.

Abdel Ghufar Shukr is deputy head of the National Council for Human Rights, an arm of the Egyptian government.

His comments caused outrage among other human rights activists known to be supportive of the Egyptian government’s policy towards the Muslim Brotherhood.

Mahmoud Kubbaysh, a well-known human rights expert, said there was “no excuse for these kinds of statements”.

“We must work within the law – there is nothing that prevents this judgement being carried out.”

The judgement was criticised by various international powers when it was handed down last week.

However, the Egyptian Justice Ministry has hit back at detractors in the international community, saying such criticism was a violation of Egypt's sovereignty. 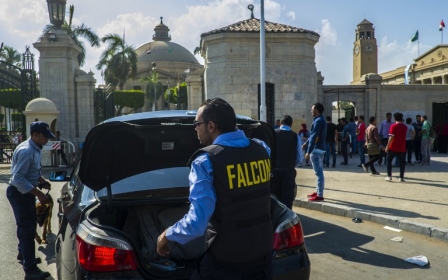