Women voters disappointed, hoping that the emir's quota of the remaining 15 members of the Shura Council will feature female representation

Qataris queue at a polling station in the capital Doha on 2 October 2021, during the country's first ever legislative vote (AFP)
By
MEE and agencies

Women voters in Qatar expressed disappointment on Sunday, after all 30 seats up for grabs in the country's first legislative elections went to men, despite women making up about 10 percent of the total candidates.

Now all eyes are on whether the ruling emir will use his powers to appoint female representatives to the remaining 15 members of the Shura Council.

The Shura Council will have legislative authority and approve general state policies and the budget, but has no control over executive bodies setting defence, security, economic and investment policy for the small but wealthy gas producer, which has banned political parties.

'We still hesitate to accept women... voters still feel that their communication with men is more free and flexible than their dealings with women'

"The (emir's) quota is the lifeline to ensure women's representation in the next assembly," said defeated candidate Aisha Jassim al-Kuwari who ran in a constituency alongside four other women against 14 male contenders.

"We hope to appoint four to five women because the presence of women is very important.

"Some of the female candidates were disappointed, of course, because they presented strong programs - but we should not forget that some female voters chose men and this is the will of the people.”

It is not known when the emir's appointments will be announced or when the council will meet.

"I'm not happy because all of them (winners) are men - some of them are old. To be honest, I was surprised. It's not fair," said voter Shamma, who declined to give her full name.

"We are really sad.”

Turnout for the election was 63.5 percent, the internal ministry said in a statement early on Sunday.

As well as counting no women amongst their number, the 30 victorious candidates were older men and mostly from prominent families, many of whom had backgrounds in business or government.

"You lost the battle of victory, but you won the war of participation!" popular Qatari author Ebtesam al-Saad wrote on Twitter.

"We still hesitate to accept women... voters still feel that their communication with men is more free and flexible than their dealings with women." If, as expected by many analysts, the emir does directly appoint women to improve the gender balance it would follow what happened in Bahrain's legislative election.

Official sources had confirmed to AFP this was a likely outcome in the event no women succeeded at the ballot box in Qatar.

The Gulf Centre for Human Rights said that Qatar's election laws would "need to be fully amended" to give women candidates a chance at future polls.

Qatar touts the level of representation enjoyed by its women, with the health ministry led by a woman and the foreign ministry represented by a spokeswoman.

Women also hold prominent roles in the World Cup organising committee, as well as philanthropy and the arts, medicine, law and business.

But in March, Human Rights Watch accused Qatar of restricting the lives of its female population through unclear "guardianship" rules, requiring adult women to obtain male approval for everyday activities.

The constitution of Qatar, a conservative Muslim Gulf state, provides for "equal opportunities for all citizens".

The Shura will be allowed to propose legislation, approve the budget and recall ministers, but the all-powerful emir will wield a veto. GCC
Calls for release of political detainees ahead of Qatar elections Culture
Quiz: How well do you know these cities from the Arab world? 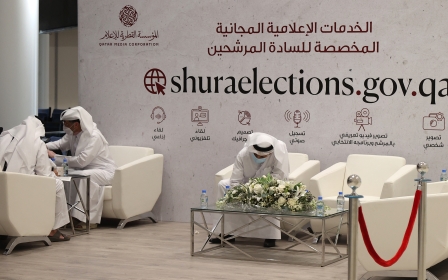