Racist attacks against Muslims living in the UK rose by more than 300 percent in the week following mass killings in France claimed by the Islamic State (IS) group.

A government report seen by UK daily the Independent shows there were 115 attacks against Muslims in the UK after the 13 November killings left 130 people dead in Paris.

Most of the victims were female Muslims aged between 14 and 45, wearing traditional Islamic dress. The majority of perpetrators were white males aged between 15 and 35.

Thirty-four victims were women wearing the hijab and eight were young children.

The actual number of attacks on Muslims is likely to be much higher because many victims would have been too scared to contact the police, according to rights group Tell Mama, who compiled the statistics.

“The vast and overwhelming majority of the victims are visible women between the ages of 14-45,” the report states.

“This is concerning since the cases show that women who wear the hijab are the ones being targeted for general abuse and threats.”

Tell Mama said most of the anti-Muslim attacks have taken place in public places, including on trains and buses.

Some of these incidents have been caught on camera.

A video posted to YouTube on 13 November, the same day as the attacks in Paris, showed a man pushing a woman into the side of a moving train at Piccadilly Circus underground station in London.

The man has since been charged with attempted murder and is currently standing trial.

Tell Mama said that “many of the victims have suggested that no one came to their assistance or even consoled them, meaning that they felt victimised, embarrassed, alone and angry about what had taken place against them.”

On 17 November a tube passenger posted to Facebook about one incident he had witnessed when travelling home.

Ashley Powys said a “young girl wearing a hijab” was abused by a fellow passenger, who shouted insults at her including “rag-head”, “terrorist” and “scum”.

Powys confronted the attacker who told him he was a “terrorist sympathiser”.

Powys accompanied the woman, who he said was in tears, off the train and gave her a hug to say goodbye.

“I think it's incredible for people like her to showcase their beliefs, despite the onslaught,” Powys wrote on Facebook.

“Yara is much braver that I am. And she, and people like her, inspire me to stand up for what *I* believe in. And that's an equal, kind, and understanding society despite religious and cultural differences.”

Tell Mama reported that 16 of the victims in its report said they would be “fearful of going out in the future and that the experiences had affected their confidence”. 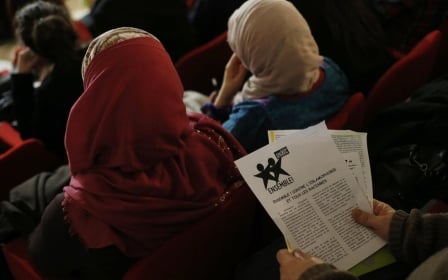