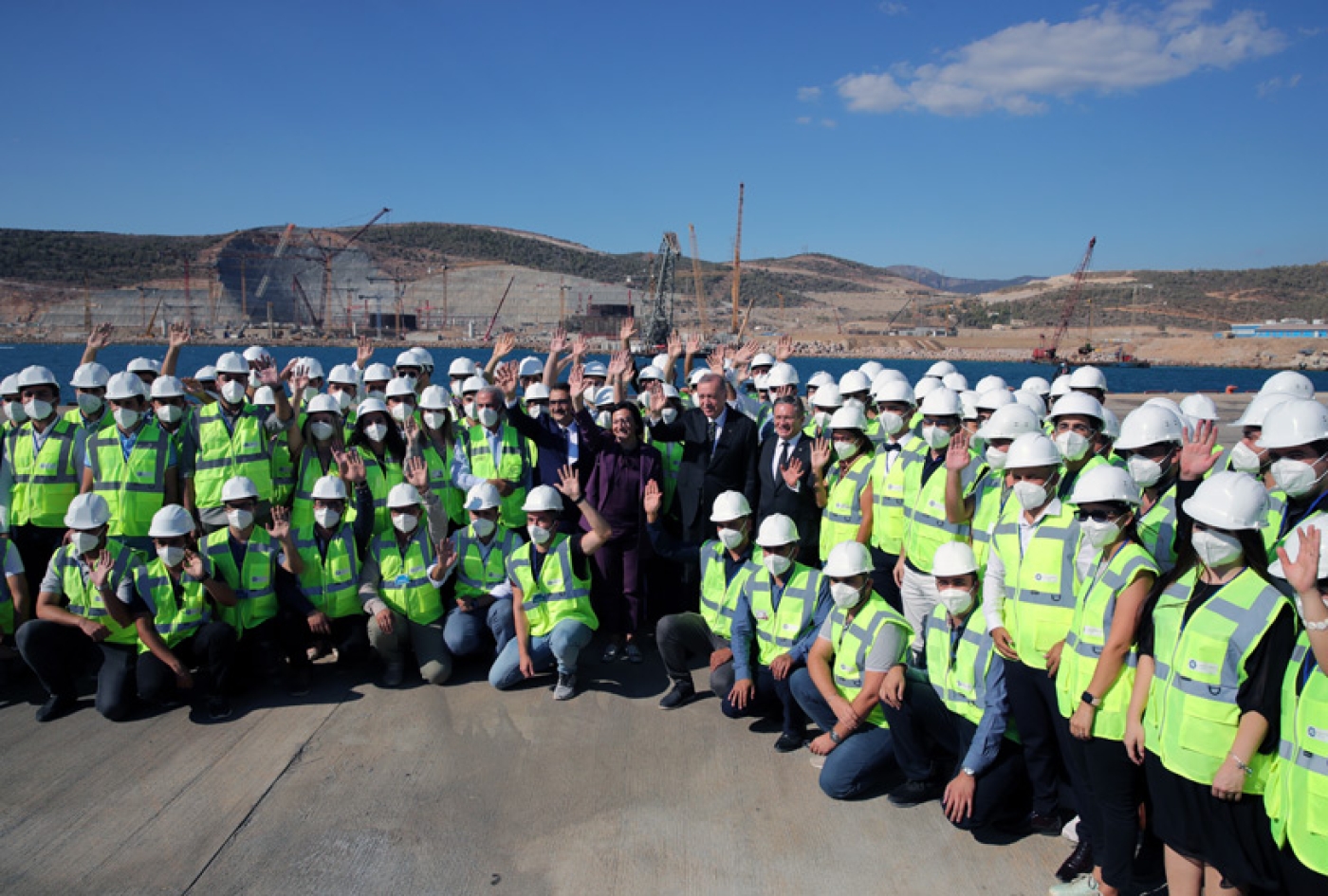 A Russian state-owned company sought a $6.1bn loan deal this week to fund the construction and development of Turkey's Akkuyu nuclear power plant, including plans to deposit some of the money with the Turkish Ministry of Treasury and Finance, according to official documents.

In a public announcement on Monday, Rosatom Corp collected bids from potential creditors to provide a $6.1bn credit line to finance Akkuyu Nuclear JSC, its subsidiary in Turkey.

The initial credit would be $3.3bn with an option of $2.8bn of additional funds.

The official documents suggest the money would be used for four projects, including the purchase of equipment, payment for construction and installation works, and operation of the nuclear plant and four power units with VVER-1200 reactors.

The money will also be also used for the acquisition and development of a uranium deposit in Kazakhstan, and for acquiring lithium assets abroad. The official notice and the memorandum for the loan says one of the "intended uses" of the credit line would be for "temporary placement in deposits, purchase of dollar bonds of the Ministry of Treasury and Finance of the Republic of Turkey".  The intended amount is not clear.

Rosatom’s Akkuyu Nuclear JSC also plans to use its subsidiary Atomenergoprom as the guarantor for the loan, and pledge some Turkish dollar bonds to secure the credit line if the lender agrees.

"Rosatom press service" confirmed that the company was using various mechanisms for both raising and securing the funds.

"In this case, the loan agreement could have a possibility that the funds could be temporarily placed into Turkish treasury bonds and/or deposits until they are used for the purpose of the project," the Rosatom press service said in emailed comments to Middle East Eye.

On Friday, Bloomberg reported that Rosatom had decided to wire $15bn to Turkey for the construction of the $20bn Akkuyu nuclear power plant, citing officials who said that an initial $5bn had already been received last week.

The officials suggested the move was a goodwill gesture by Russian President Vladimir Putin to thank Turkey for the breakthrough Ukraine grain deal brokered by Ankara this month.

The Turkish government is in dire need of foreign funding as a result of its rapidly evaporating foreign currency reserves.

Rosatom is expected to spend up to $2bn quickly on overdue payments to subcontractors.

The company told Bloomberg that it would indeed transfer some funds to Turkey, but an amount much lower than that declared by Turkish officials.

The power plant will satisfy 10 percent of Turkey's energy needs when fully operational in 2026.

Since last year, the Turkish treasury has introduced a number of tools to help provide a lifeline to its coffers by promoting Turkish lira assets.

In December, the treasury introduced "foreign exchange protected Turkish lira deposits" under a scheme to encourage investors to use the local currency.

The accounts, which are open to foreign investors, compensate savers if the exchange-rate depreciation exceeds the official interest rate.

One source with knowledge of the matter pointed out that the bid was open for only two days, Monday and Tuesday, with the evaluation to be completed on Friday, raising the possibility that a creditor might already have been chosen and the notice was a mere procedure. The timing of the bid roused interest in Turkey as Rosatom decided to pursue the credit line just one day before its subsidiary, Akkuyu Nuclear JSC, cancelled its contract with the Turkish-Russian contractor Titan2 Ic Ictas, citing several violations, ranging from security to insurance.

In a statement, Ictas reminded the public that the company was a joint venture, including a party associated with Rosatom.

"The attempt to cancel the contract is resulting in the removal of the Turkish partnership from the project as the contractor," Ictas said.

"There are steps to assign a Russian company as the sole alternative contractor. It is very clear that the aim is to reduce the participation of the Turkish companies within the management of the project and degrade them to subcontractor level."

'Turks are completely out'

The main shareholder of TSM Eneji is Titan2 JSC, with 49 percent, which makes the company a subsidiary of Rosatom.

One Turkish source with knowledge of the matter told MEE that Turkish workers were not allowed onto the construction site on Friday, while Russian workers associated with Titan2 Ic Ictas were granted access.

"Turks are completely out," the source said. "That's about it."

*This article has been updated with comments by Rosatom.