The foreign ministry said Bogdanov stressed the need to establish dialogue between the Syrian government and the "constructive" opposition.

The talks with Hariri, who represents the official Syrian opposition, came as the Russian-backed Syrian government of Bashar al-Assad has been preparing an offensive on northwestern Idlib province, the last major rebel enclave.

Foreign Minister Sergei Lavrov has insisted on clearing the region of rebels, describing them on Wednesday as "a festering abscess".

Syrian forces are preparing a phased offensive, a source close to Damascus said, that would focus on southern and westerns parts of the province but not Idlib city itself.

"The final touches for the first stage will be completed in the coming hours," the official added, without saying when it would start.

There were still negotiations over the offensive going on between Russia and Turkey, as well as with Iran, which also supports Damascus in the war, the official said.

Turkey, which borders Idlib and has a small military presence there, has warned against such an attack.

At the US State Department, spokeswoman Heather Nauert said there were indications that Syrian forces were preparing an offensive on Idlib.

She said Washington's new representative for Syria, Jim Jeffrey, raised concerns about the possible offensive in a recent meeting with Russia's ambassador to the United States.

"We are concerned not just about a potential chemical weapons attack, but we are concerned about any kind of escalation of violence in Idlib that would put civilians and civilian infrastructure in Idlib at risk," she added.

Russian Ambassador to the US Anatoly Antonov said he warned American officials that any strikes against the Syrian government would be "groundless and illegal aggression against Syria."

Idlib and surrounding areas outside government control are home to three million people, of whom 1.8 million are displaced. Many of the displaced people fled earlier offensives to escape the fighting or avoid coming back under Assad's rule - including those bussed to Idlib under "evacuation" deals when rebels surrendered other enclaves.

Evacuations from eastern Ghouta, Daraa and other rebel territories captured by the government have contributed to the displacement of more than half a million people to or within Idlib in the past six months, the UN said. 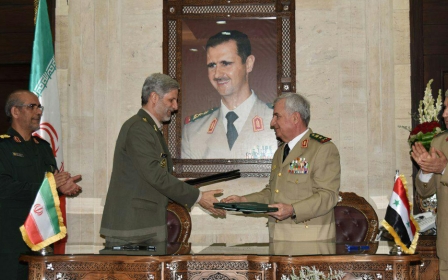