Parents, relatives and flatmate arrested, as security source says there are 'strong' signs of assassin's link to Fethullah Gulen Turkish police have arrested the parents, relatives and flatmate of an off-duty police officer who assassinated the Russian ambassador in Ankara on Monday while shouting "Don't forget Aleppo" and "Allahu Akbar".

The state-run Anadolu agency said on Tuesday Mevlut Altintas' mother, father, sister and two other relatives were held in the western province of Aydin, while his flatmate in Ankara was also arrested.

Police paced up and down behind a cordon on Tuesday morning outside the art gallery where the ambassador Andrey Karlov was shot, and Altintas was killed by police shortly after.

Altintas, 22, used his police ID to enter the show while armed, reports said on Tuesday.

He set off the metal detector security check when he entered the exhibition in central Ankara as he was carrying a gun, the pro-government Sabah newspaper said.

But after showing his police ID, he was waved through and allowed to proceed.

The Hurriyet newspaper added that Altintas, who had worked for Ankara's anti-riot police for the last two and a half years, had stayed at a nearby hotel to prepare for the attack.

It said Altintas, who was off-duty at the time, had put on a suit and tie and shaved at the hotel before heading to the exhibition centre.

He paced about and shouted as he held the gun in one hand and waved his other hand in the air.

The United States said its three missions in Turkey would be closed on Tuesday after a gun was fired in front of the US embassy in Ankara overnight. The embassy was near the art gallery where Karlov was shot and Turkish police arrested a man over the incident, state media reported.

A Russian delegation was due to arrive in Ankara at 11am local time to investigate the attack, broadcaster CNN Turk reported.

Turkish President Recep Tayyip Erdogan said Tuesday he had agreed with Russian counterpart Vladimir Putin that the assassination of Moscow's ambassador to Ankara would not harm cooperation between the two countries, including on Syria.

"We share the same understanding with Mr Putin that our expanding areas of cooperation with Russia, particularly on Syria, will not be hampered by this attack," Erdogan said in Istanbul after speaking by phone late Monday with Putin over the killing of ambassador Andrei Karlov.

Putin on Monday warned that the killing of Karlov was a "provocation" aimed at damaging ties with Turkey and undermining the latest efforts to reach a settlement on Syria.

At the same time, Russian Foreign Minister Sergei Lavrov said on Tuesday there should be no "concessions to terrorists" at talks with his Turkish counterpart on Syria.

"This tragedy forces all of us to fight more decisively against terrorism," Lavrov told Turkey's Mevlut Cavusoglu as they sat down together in Moscow.

"For this reason, I very much hope that our talks and the upcoming three-way meeting with our Iranian colleague will allow us to reach agreements, which will through concrete actions advance the settlement in Syria," Lavrov said, also insisting that they should not allow "any concessions to terrorists".

Russia, Iran and Turkey are ready to help get a deal done between the Syrian government and opposition, Russian foreign minister Sergei Lavrov said on Tuesday after meeting his Iranian and Turkish counterparts in Moscow.

A spokesman for the group urged sympathisers around the world this month to carry out a fresh wave of attacks, singling out Turkish diplomatic, military and financial interests as preferred targets.

However, a senior Turkish security official told the Reuters news agency that there were "very strong signs" the gunman belonged to the network of the US-based cleric Fethullah Gulen, who Ankara says orchestrated a failed coup in July.

The mayor of Ankara, Melih Gokcek, who is known for his outspoken comments, also speculated on his official Twitter account that the attacker may be linked to Gulen.

Translated, the Twitter post says: "The assailant is a policeman... And my feelings are that he belongs to FETO... The slogans the attacker was shouting is just to mislead perceptions."

Erdogan has denounced Gulen as a terrorist, but the cleric, a former ally, denies the accusation, and has also denied any role in the assassination.

"I condemn in the strongest terms this heinous act of terror," Gulen said in a statement. "No terrorist act can be justified, regardless of its perpetrators and their stated purposes."

"It is the expectation of the Turkish people and the world that the government investigate the circumstances of this incident, identify those who aided the perpetrator and take the necessary precautions so that such an attack cannot be staged in the future."

Turkey, which seeks to topple Assad, has been repairing ties with Moscow after shooting down a Russian fighter jet over Syria last year.

Both countries say the assassination of Karlov will not damage their ties. 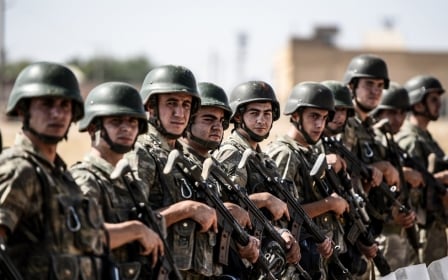