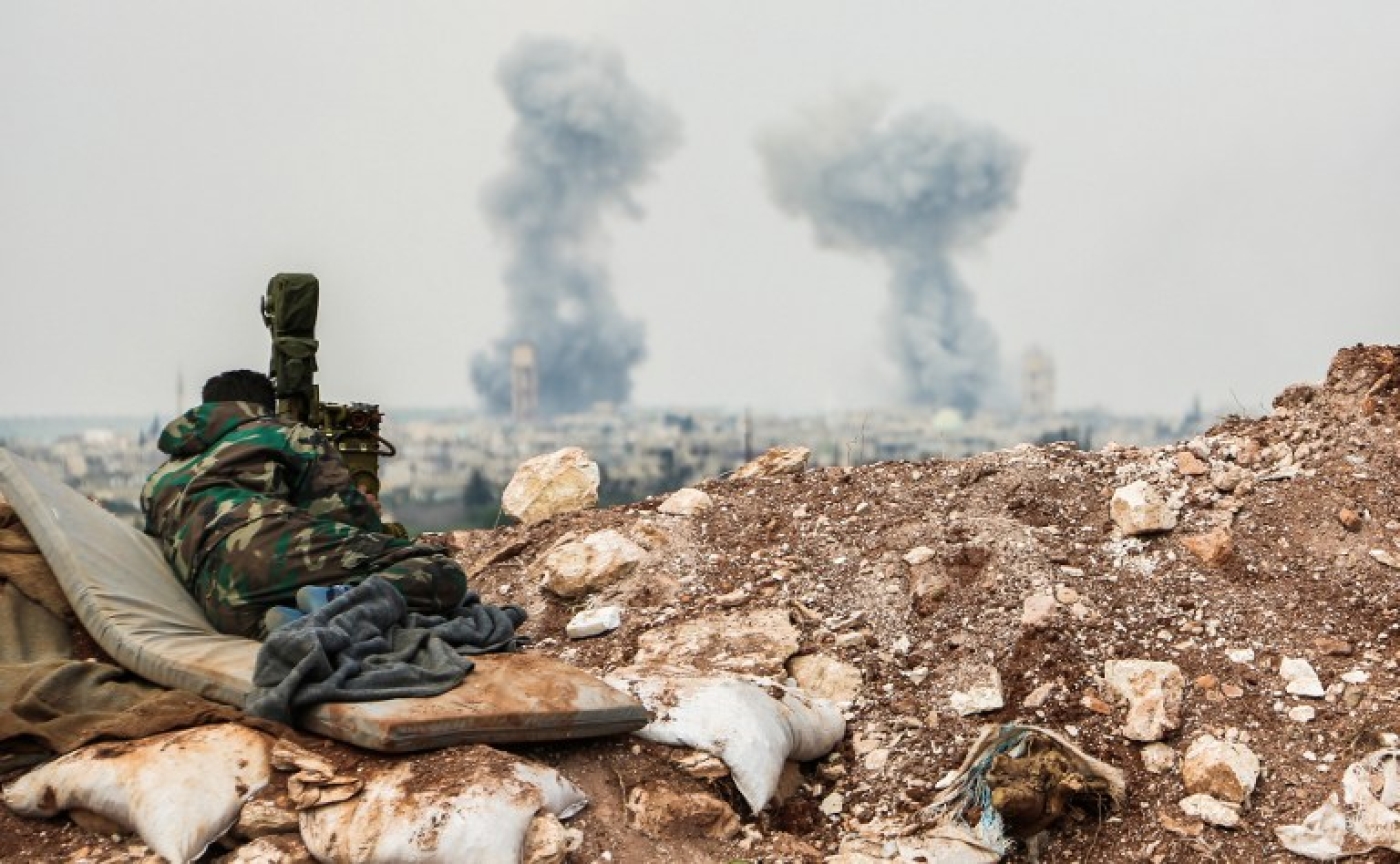 A Syrian forces' artillery observer looks through a scope as smoke plumes rise on the horizon, near the town of Qumhanah in Hama, on 1 April (AFP)
By
MEE and agencies

An agreement on safe zones in Syria has came into force on midnight Friday but Russia's air force will continue striking Islamic State elsewhere in the country, Russian news agencies cited Russian Defence Ministry as saying on Friday.

The first and largest zone in northern Syria will include Idlib province and adjoining districts of Latakia, Aleppo and Hama with a total population of over 1 million, the ministry said.

However, clashes are still happening, according to the Syrian Observatory for Human Rights. The monitoring group said government forces battled rebels in the northwestern Syrian province of Hama.

The Observatory said the warring sides exchanged shelling and were fighting in a rebel-held village and nearby areas of the Hama countryside.

The position of the United States allowed to create conditions for political settlement in Syria, the agencies quoted Russian Deputy Defence Minister Alexander Fomin as saying.

The fact that the de-escalation agreement was supported by the United Nations, the United States and Saudi Arabia guarantees its implementation, he said.

In Washington, Pentagon spokesman Captain Jeff Davis told reporters that the US-led coalition had not altered operations in Syria, but declined to comment on the de-escalation zones.

Moscow's envoy said on Friday that jets from the US-led coalition are barred from the proposed safe zones.

US Secretary of State Rex Tillerson and his Russian counterpart Sergei Lavrov will discuss the de-escalation plan when they meet in Alaska this month, Russian news agencies quoted Lavrov's deputy Mikhail Bogdanov as saying on Friday.

"In terms of their actions in the de-escalation zones then from this moment these zones are closed for their flights," the Kremlin's envoy to peace talks in Kazakhstan, Alexander Lavrentiev, was quoted as saying by Interfax news agency.

"Aviation operations, especially by the international coalition forces, are absolutely not envisioned," he said.

Government allies Russia and Iran and rebel supporter Turkey on Thursday signed a deal at talks in Kazakhstan to set up four safe zones in the war-torn country.

The agreement did not explicitly mention the US-led coalition, which has been targeting the Islamic State group and other militants, but Lavrentiev insisted that "flights cease over these territories".

"We as guarantors will closely monitor all operations," he said.

Moscow's envoy said this means coalition air power can now only focus on "Islamic State targets that are located in the area of Raqqa, some populated areas in the region of the Euphrates, Deir Ezzor and further on to the territory of Iraq".

The exact boundaries of the proposed safe zones in Syria are yet to be defined but they are meant to focus on rebel-held territory.

Syria's armed opposition on Thursday rejected the Russian plan, calling it a threat to the country's territorial integrity, and said it would also not recognise Iran as a guarantor of any ceasefire plan.

We have an agreement already (in) our hands, why isn’t it implemented?

"We are against the division of Syria. As for the agreements, we are not a party to that agreement and of course we will never be in favour (of it) as long as Iran is called a guarantor state," Abu Zaid said.

He also cited what he called "a huge gap" between the promises of Russia, which intervened militarily in 2015 on Assad's side and gave him back the upper hand in the conflict, and the failure of earlier ceasefires.

"We have an agreement already (in) our hands, why isn’t it implemented?" he said, referring to a truce deal announced by Russia in December that was largely ignored on the ground. "Why are we jumping now to safe zones?"

"Russia was not able to or does not want to implement the pledges it makes, and this is a fundamental problem."

Russia, Turkey and Iran did not immediately publish the memorandum, but the safe zones appear intended to be conflict-free to help widen a ceasefire, and would potentially be policed by foreign troops.

The US state department said in a statement that it was sceptical of Iran's involvement as a guarantor of the accord and Damascus' track record on previous agreements.

A spokesperson for the pro-Kurdish Democratic Union Party (PYD) said on Friday they rejected proposal to create de-escalation zones in Syria, viewing it as "sectarian partition" of the country.

The plan amounts to "dividing Syria up on a sectarian basis," said Ibrahim Ibrahim, a PYD spokesman, who described it as a "crime".

brahim said the Russian proposal could also threaten autonomous regions in the Kurdish-dominated north that emerged with the onset of the multi-sided conflict in 2011.

The PYD is the political affiliate of the YPG militia, which effectively serves as the military of the Kurdish-led enclaves and has appeared to be a key partner for the United States in fighting Islamic State in Syria.

The dominant Syrian Kurdish groups and their allies aim to deepen their autonomy through establishing a new system of federal government in the north. They say the regional federal model should be the solution to the entire Syrian war.

The countries involved in the de-escalation deal could thwart these plans and encroach on the autonomous regions, Ibrahim said.