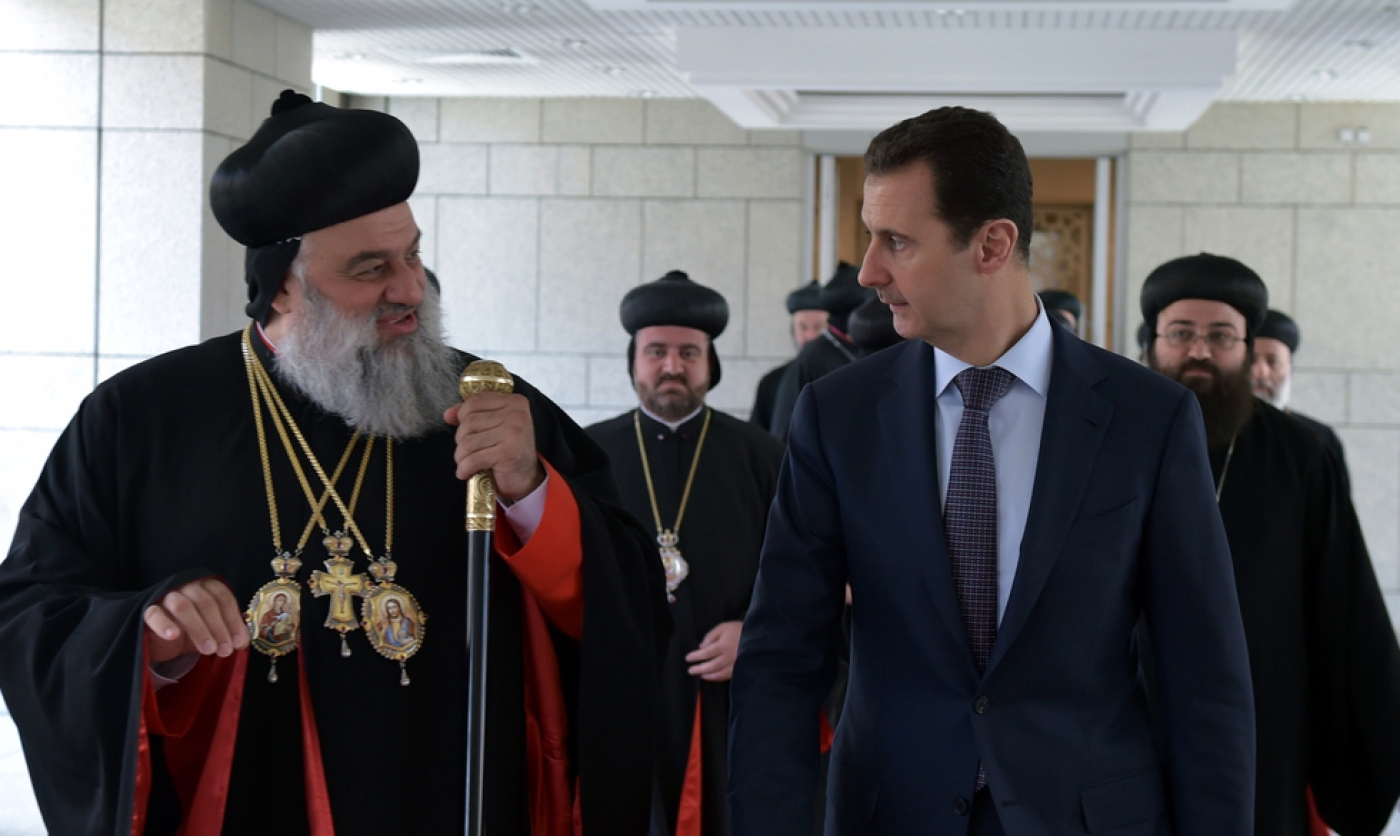 A week into Russian airstrikes in Syria, international observers have criticised the focus of the Putin administration's campaign on non-Islamic State (IS) group targets. But Russian President Vladimir Putin has dismissed those claims, describing reports of civilian casualties as an "information war".

Domestically, Putin has the support of a powerful ally with over 150 million adherents worldwide. Last week, Vsevold Chaplin, the head of the public affairs department of the Russian Orthodox Church, addressed a press conference in Moscow, expressing support for Russia's intervention in Syria.

“The fight with terrorism is a holy battle and today our country is perhaps the most active force in the world fighting it,” said Chaplin, investing Russian intervention in Syria with religious significance.

“Our country has always been connected with (the) protection of the weak and oppressed, like the Middle East Christians who are now experiencing a genocide.”

Chaplin’s statement did not mark the first time a member of the church has expressed support for Russian policy in Syria. In 2012, members of the church notably expressed opposition to Western plans to increase military support to rebel groups fighting Syrian President Bashar al-Assad.

However, the church’s framing of Russian intervention as a “holy war” has raised concerns that the sectarian dimensions of the conflict could be exploited for propaganda and recruitment purposes by groups such as IS, which have also sought to exacerbate sectarian divisions. The Vatican has remained tight-lipped on the subject.

Persecuted under the Soviet Union, the Orthodox church has regained a lofty position within Russian society, and has been heavily patronised by Putin.

Putin has overseen the reconstruction of 23,000 Russian Orthodox Churches that fell into disrepair under communist rule and returned seized landholdings to the church, making the institution one of the wealthiest in Russia. In return, the president has relied on legitimisation from the church for foreign policy endeavours.

With the demise of communism as an ideological source of legitimacy in the post-Soviet era, observes Anna Borshchevskaya, an expert on Russian foreign policy in the Middle East at the Washington Institute, Putin has sought to revive pre-communist nationalist notions of the church, dormant for example during Soviet campaigns in Afghanistan in the 1980s.

“Putin advances the idea of Russia as a 'unique civilisation' - an idea as old as Russia itself, and one where the ROC historically played a central role,” said Borschevskaya.

“In this view God endowed the Grand Dutchy of Moskovy, which later became the Russian state, with the sacred mission to preserve and expand the only real true Christian faith - the Russian Orthodox faith. Moscow officials historically used this idea for political purposes, including justification for war. Putin simply adjusted this idea to fit the times.”

The Russian church has historic ties to the Orthodox churches throughout the Middle East, including Syria.

Lina Khatib, a senior research associate at the Arab Reform Initiative, noted that the church’s backing of Russian intervention in Syria marks a continuation of the Assad government’s self-portrayal, through its affiliated media outlets, as the sole defender of Syria’s religious minorities.

Activists have long pointed to the release of known Islamist prisoners from Syrian government jails, and the concentration of government aerial campaigns on non-IS rebels, as evidence that the Syrian government has claimed to protect minorities while simultaneously enabling groups to expand.

“The ROC's statement is an attempt at validating the regime's narrative,” said Khatib. “(But) this move will only further sectarianise the conflict and provide ISIS with stronger validation for its own narrative that it is fighting 'infidels' and 'crusaders'."

Last Wednesday's reports emerged that Russian airstrikes had targeted the town of Talbiseh, in Homs province. A statement released by a local field hospital later claimed 18 civilians had been killed.

According to the Institute for the Study of War there is no IS presence in Talbiseh.

Russia maintains the central focus of its airstrikes is IS. However, most strikes have been in places like Idlib, Hama and Homs provinces, against rebel groups who oppose IS but pose a more immediate threat to the Assad government.

Current airstrikes are accompanied by ground offences launched by troops loyal to Assad aimed at securing control over major centres linking Latakia, Tartus and Banyas on the Mediterranean, with Homs, Hama and Damascus.

“There was a small group of Islamic State fighters at the start of 2014 stationed 10km from the town. But they left the area when US-led airstrikes began last year,” said Firas al-Said, a citizen journalist based in Talbiseh, who spoke to Middle East Eye via Skype.

In addition to Russian airstrikes, al-Said noted that Talbiseh has faced bombardment from Assad barrel bombs in the last week.

“We are also under siege. People fear if they flee they will be killed by the Syrian army. This is an agricultural area, people live off the land. But items like rice and sugar, we will be out of these soon.”

Monzer Akbik, a spokesman for the Syrian National Coalition - a collection of opposition groups formed in November 2012 during opposition meetings in Doha - claimed that emphasising the sectarian dimensions of the conflict suited the Assad government and its backers in Moscow and Tehran.

“The aim is to eliminate the moderate opposition and present the world with the option: IS or the regime. The SNC is trying to reduce sentiments of religion, we are trying to emphasise freedom and a Syria for all Syrians,” said Akbik, stating that a number of Greek Orthodox churches in Syria had released statements distancing themselves from the Russian church’s position.

Analysts have noted that Russia could face potential blowback from groups with IS sympathies in the Caucasus as a result of its intervention in Syria. Russian speakers account for the single largest group of non-Arab foreign fighters in Syria.

However Stephen Blank, a Russian expert at the American Foreign Policy Council, noted that in Syria itself Russian intervention has faced little challenge beyond rhetoric from Washington.

“It will only be a dangerous game for Putin when someone steps up with a counter-strategy. The US is nowhere near that or ready to aid its supporters in Syria against Russia to make it into a quagmire.”

Blank has argued Russia’s intervention in Syria is part of a long-term project aimed at securing strategic influence in both the Balkans and the Levant.

By contrast he describes the approach of the Obama administration - which has lacked domestic support for greater involvement in Syria - as “a monument to egregious strategic incompetence”.

In the last couple of weeks the foreign ministers of both France and Britain have appeared increasingly close to advocating a potential settlement that would see Assad temporarily remain in power.

“Russia’s entrance into the conflict has raised fears that the war becomes framed as a clash of civilisations,” said Imad Salamey, a political science professor at the Lebanese American University.

“However given the Obama administration’s lack of commitment to finding a resolution to the conflict, Russia has stepped in with a defined goal to secure its interests.

“If limited Russian intervention brings regional and international actors to the negotiating table towards a political solution, Russia could be seen as playing a stabilising role in the Middle East, helping to resolve conflicts where others have failed.”

Back in Talbiseh, al-Said simply expressed concern that further Russian bombs would be landing on the town in the coming week.

“We see drones flying constantly. There are Christians here in Talbiseh too. The West should take more responsibility. They are letting Russia claim their actions are in the name of Christianity.”