Sami Anan: Presidential hopeful to enemy of the state in three days

Sami Anan pulled out of the presidential race on Tuesday, after he was arrested for 'incitement' only days after announcing his intention to run 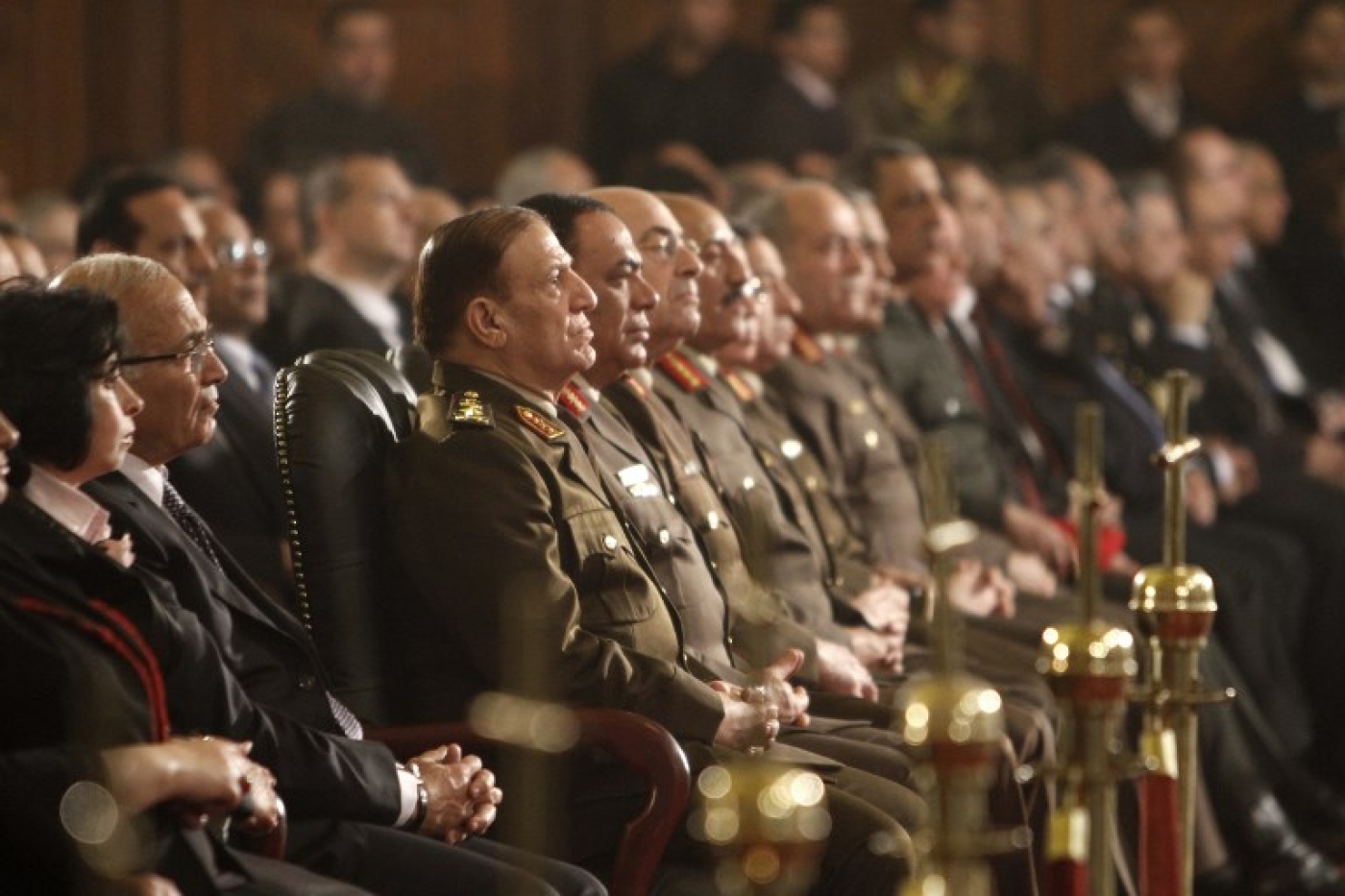 Sami Anan set out on Saturday to "save the sinking ship" of Egypt by becoming its next president. On Tuesday, the former army chief of staff's bid was torpedoed when he was arrested by the army for "incitement".

Anan's announcement was, according to the military, an attempt to drive a wedge between the armed forces and the Egyptian people. For good measure, he was accused of falsifying documents needed to run against the incumbent, Abdel Fatah al-Sisi.

Anan's spokesman, Mahmoud Refaat, told Middle East Eye Anan was a victim of "lies" and his genuine attempt to "save a sinking ship" had left him under arrest and fearing for his life.

Observers had initially pointed towards Anan’s candidacy as a ploy to give legitimacy to the vote, until Anan announced his appointment of former top auditor Hisham Geneina as an advisor. Geneina was investigated under Sisi for claiming in 2016 that state corruption had cost the country a staggering $76bn.

According to Refaat, Anan’s appointment of Geneina was to send a strong message that Anan was looking to establish a law-abiding state.

For years, analysts have pointed to Anan as a potential successor of the presidency, with sources telling MEE that Anan has wanted to run for president for a long time and has been sidelined by Sisi who sees him as a potential threat.

An eye on the presidency

After the 2011 uprising, he became second in command of the army, behind Field Marshal Hussein Tantawi. In February 2011, Anan appeared in front of protesters in Tahrir Square and promised to safeguard the interests of the people.

An Egyptian political source told MEE in 2015: “In meetings with political figures and activists after the 2011 uprisings, Anan continuously portrayed himself as the one who protected the revolution and that it was upon his orders that the army did not clash with protesters in 2011.”

Egyptian police used teargas and rubber bullets as they clashed with protesters in a bid to clear thousands of demonstrators from central Cairo's Tahrir Square in early 2011.

Egyptians had taken to the streets demanding the end of president Hosni Mubarak's 30-year rule in mass demonstrations inspired by the toppling of the government in Tunisia.

“It seemed as if he was trying to portray himself in a positive light; he wanted to maintain an untainted reputation which would set him up for running for president someday,” added the source.

In 2011, there was little dispute among international observers that Anan would play a central role in Egypt’s future government, even if behind the scenes, through the armed forces.

Following the uprising, his influence rose further, as he toured polling stations during the first round of the presidential election and held various meeting with Egypt’s leaders.

Former presidential candidate Ayman Nour, who founded the liberal El Ghad party, told MEE in 2015: “Anan wanted to run for president since 2012 but he adhered to Tantawi’s orders to not get directly involved in the elections.”

However, on 12 August 2012, Egypt’s first democratically elected president, the Muslim Brotherhood’s Mohamed Morsi, dismissed both Tantawi and Anan, who was replaced by Lieutenant-General Sidki Sayed Ahmed.

Anan’s removal came as a surprise to many - even despite protesters' demands for action against political and military figures who had overseen the repression of the 2011 uprisings.

“The sacking of Anan came as a huge surprise. It was expected that Tantawi would be dismissed and replaced by Anan as the new head of SCAF,” the Egyptian political source said.

While Anan had allegedly warned Morsi in 2012 against appointing Sisi as his new defence minister, rumours circulated that Sisi was the one who advised Morsi to dismiss Anan and Tantawi, a leading liberal political figure in Egypt told MEE in 2015.

“It was obvious that Anan does not like Sisi and would have liked to be in his place," said Egyptian political analyst and commentator Nadia Abou el-Magd.

"When Morsi sacked Anan and Tantawi as a means to consolidate his power, it may have been Sisi who advised him to do that," she added.

'Anan was sidelined, made to retire from the army and barred from having any political life. There has been zero tolerance in Sisi's Egypt for a military man to have a political role'

Although it is not clear why Morsi chose Sisi over Anan, 2012 may have marked a breaking point between the two former military leaders.

According to Issandr el-Amrani, director of Crisis Group's North Africa Project speaking to MEE in 2015, after the 2011 uprisings, "there was a divide in the military which ended with Sisi being appointed as defence minister”.

"Anan was sidelined, made to retire from the army and barred from having any political life. There has been zero tolerance in Sisi's Egypt for a military man to have a [prominent] political role.”

This feud is believed to have raged ever since, but Anan has since tried several times to maneouvre himself back onto the political scene.

Following Morsi’s overthrow in July 2013, Sisi and the army took control, with Sisi being elected president in May 2014 in a controversial vote that saw most main political opposition parties banned.

This did not seem to stop Anan's persistent attempts. In early 2015, he founded the Arabism Egypt Party, after the Supreme Electoral Commission rejected his application to establish the party in December 2014.

“It's clear that Anan set up the party in preparation for the next presidential race instead,” a liberal Egyptian political source told MEE at the time.

Rising through the ranks

Born to an affluent family in the Egyptian Delta city of Mansoura in 1948, Anan joined the military in 1967 and rose through the ranks to command Egypt's air defence battalions, serving as defence attache to Morocco between 1990 and 1993.

Anan first became recognised as an important player in Egyptian security and politics in 1997 when a terrorist attack in Luxor killed 62 people, hitting Egyptian tourism hard. As head of air defence in Luxor at the time, Anan took control of securing the city and supporting the police to help the victims.

His slick actions were commended by then-president Hosni Mubarak, who promoted Anan in the air defence unit to a higher position. The incident marked Anan's quick rise through the military ranks, according to al-Arab newspaper.

In contrast to Tantawi, a Mubarak loyalist and resistant to economic reform, Anan was seen as a man with a strong potential role in the military and government.

Unlike Egypt’s younger generation of army officers, Anan did not study or train in the US. Instead he received most of his training in Egypt, and later in France and Russia, according to US officials who spoke to the New York Times in 2011.

Anan has a reputation for being astute among his generation of military officers and more open and socially adept than Tantawi.

After Anan aimed to run for president against Sisi in 2014, he claimed that as a result of his plans, he was targeted in an assassination attempt.

His spokesperson told Arabiya news at the time that armed men driving a vehicle chased him and opened fire at his car while he was returning home but that he was able to escape.

“Anan went to the police about the shooting but the police said his claim was fabricated. He ended up having to pull out of the elections as a result of the threat he was under,” said a liberal political source.

According to Abou el-Magd, there was talk about Anan being under house arrest after insisting on running in the presidential elections while Egyptian media - known to relay the government's position - displayed a growing intolerance towards Anan.

"Whenever Anan's name was mentioned in Egyptian media it was not in a positive light,” said Abou el-Magd.

“He was portrayed as a threat to Sisi because of his desire to run for the elections - something that is seen as tantamount to an act of treason."

When the 2011 uprising began, Anan was in Washington "for a week of meetings with senior American officers". He cut his visit short and returned to Egypt on 28 January, reported the New York Times.

He was seen by the Pentagon at the time as “a crucial link for the United States as it navigates the rocky course ahead with Cairo”, the New York Times reported.

Admiral William Fallon, a retired head of the US Central Command, who oversaw American military operations in the Middle East, including Egypt, described Anan in the report as “a sharp guy… thoughtful, astute and competent professionally”.

It was reported that the US was pushing Anan for a key mediating role after the uprisings, though his closeness to Mubarak was seen as a potential obstacle to his ascent into any role in a new government.

Anan had a pivotal role in regular exchanges between the Egyptian and American armed forces. He was among a team that alternated between Washington and Cairo and nourished a close 30-year relationship between the countries’ militaries.

Among his closest American counterparts with whom he communicated and visited regularly was Michael Mullen, a now retired US navy admiral who served as chief of naval operations between 2005 and 2007 and as chairman of the Joint Chiefs of Staff until 2011.

While Americans were reportedly wary of Anan when he became chief of staff in 2005 due to his weak English and lack of US training, he soon developed a central role in the US-Egyptian military exchange and relationship.

Cable correspondence in 2005 revealed Anan’s central role in the modernisation of the Egyptian military through US funds and technology. Under his management, the bulk of $1.3bn in US aid to Egypt was being used to “modernise equipment from an old-style Soviet stock to a US based inventory,” according to US embassy cable wires.

While the US invested in Egypt's military as a means to “bolstering interoperability… [to] shape Egypt's military modernisation… [and] potential access to the MoD [army]”, there seem to have been regular disagreements between Egypt and the US over increasing funds and what the US could negotiate in return for its investments.

It was also revealed through cable wires that Anan had an influential role along with Tantatwi in negotiating, coordinating and exchanging information with US counterparts on issues related to intelligence sharing, specifically in regards to the Arab-Israeli conflict and Hamas, countering arms-smuggling along the Egyptian-Gaza and Egyptian-Sudan borders, and strengthening security measures in Afghanistan and Pakistan.