Saudi Arabia to host its first-ever Formula One race

Saudi Grand Prix is to take place in November 2021 in Jeddah, as kingdom adds to growing list of major international sporting events Saudi Arabia will host its first-ever Formula One race next year in the coastal city of Jeddah, the elite motorsport competition confirmed on Thursday.

The inaugural Saudi Arabian Grand Prix will take place in November 2021 in the western city of Jeddah's corniche, which runs along the Red Sea. It will be one of the F1's street circuits, held on closed city streets, and will take place during the night.

“We are excited to welcome Saudi Arabia to Formula 1 for the 2021 season and welcome their announcement following speculation in recent days,” Formula One chairman and CEO Chase Carey said in a statement.

“The region is hugely important to us and with 70% of the population of Saudi being under 30, we are excited about the potential to reach new fans and bring our existing fans around the world exciting racing from an incredible and historic location.”

The news was accompanied by a promotional video welcoming Saudi Arabia as the sport’s 33rd host country.

The kingdom will be the fifth country in the Middle East and North Africa to host an F1 Grand Prix.

Morocco was the first in the region to host the sport, holding a solitary race in 1958. Meanwhile, Saudi Arabia's Gulf neighbours Bahrain and the United Arab Emirates have been a fixture on the race calendar over the past decade.

Turkey, which held seven races between 2005 and 2011, will host its first F1 Grand Prix in nine years next weekend, after it was added to a revised race calendar severely disrupted by the Covid-19 pandemic.

“Saudi Arabia is accelerating forward and the speed, energy, excitement of Formula 1 perfectly reflects the transformational journey the country is on,” Saudi Minister of Sports Prince Abdulaziz Bin Turki al-Faisal said. “For many Saudis, this will be a dream come true.”

The sports minister told reporters at a press conference in Jeddah on Thursday that the race was part of the Vision 2030 strategy to modernise the kingdom, and it was supported by Crown Prince Mohammed bin Salman.

Minister of Sport:
The nation’s vision in achieving its goals continue, with support of the man behind the vision, HRH Crown Prince Mohammad bin Salman.#فورمولا1_في_السعودية#SaudiArabianGP pic.twitter.com/uWIS6F0ecc

Riyadh's growing interest in hosting sports competitions has been consistently criticised by human rights advocates who accuse the country of “sportswashing”. "Formula One should realise that a Saudi Grand Prix in 2021 would be part of ongoing efforts to sportswash the country's abysmal human rights record,” said Felix Jakens, Amnesty International UK's head of campaigns.

"In the lead-up to a race in Jeddah, we would urge all F1 drivers, owners and teams to consider speaking out about the human rights situation in the country, including by expressing solidarity with jailed human rights defenders."

Similar concerns were raised by rights advocates over an international women’s golf tournament due to be held in the kingdom next week.

Lina al-Hathloul, whose sister Loujain has been jailed since 2018 after peacefully protesting for the right of women to drive, wrote an emotional plea to the women golfers urging them to boycott the event.

“As a woman, you know that women’s rights are human rights and that the battle for equality is far from won,” she wrote in a letter to the participants.

“In Saudi Arabia, that battle is being lost and my sister and campaigners like her have been tortured for asking for the basic rights that we should all be able to take for granted. Don’t let them make you complicit in their crimes.” 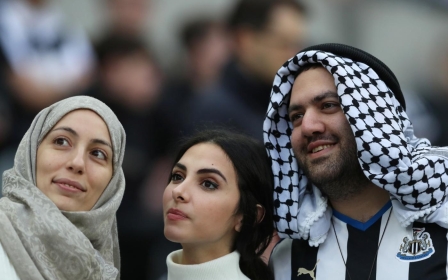