Palestinian activists express outrage over 'inconclusive' assessment on Abu Akleh's killing, saying it adds to history of impunity for Israel's targeting of civilians People in the occupied West Bank city of Bethlehem light candles during a vigil in memory of Al Jazeera journalist Shireen Abu Akleh, on 16 May 2022 (Reuters)
By
Umar A Farooq
, Zainab Iqbal
, Azad Essa

The United States has been accused of burying its findings on the killing of Palestinian-American journalist Shireen Abu-Akleh, and is facing criticism for issuing statements that appeared to absolve Israel of all responsibility over the killing.

The State Department announced earlier this week that gunfire from Israeli positions "was likely responsible for the death of Shireen Abu Akleh” but dismissed the incident as the unintentional "result of tragic circumstances".

Abu Akhleh, a veteran journalist with Al Jazeera Arabic, was killed by Israeli forces on 11 May during an Israeli military raid in the Jenin refugee camp, several eyewitnesses, including Middle East Eye contributor Shatha Hanaysha, have said.

The Israeli military denied responsibility for the killing but in the days and weeks after the incident, several publications including The Washington Post, The New York Times, as well as international bodies including the United Nations, concluded that Israeli forces had in fact killed Abu Akleh. Since the State Department's announcement, Palestinian activists have taken issue with the vague and inconsequential statement and criticised the decision to make it public on 4 July – US Independence Day – a major national holiday when many people are spending time with their families and not focusing on the news.

"Of course it was done on July 4th, at a time when nobody's really going to be paying attention to the outcome," Diana Buttu, a Palestinian human rights lawyer and former legal advisor to the negotiating team of the Palestinian Liberation Organisation, told Middle East Eye.

"It was on a long weekend where people are away and that's the point. Since Shireen was murdered by Israel, the US administration has gone out of its way to try to crush this."

Buttu said the statement was carefully crafted to avoid any tensions ahead of US President Joe Biden's scheduled visit to Israel next week.

Last month, the administration reportedly asked Israel to halt home demolitions, evictions of Palestinians and any decisions on settlement building "until after Biden's visit", saying they want "quiet and calm" for Biden's visit.

"It is not surprising in the least to see this buried announcement of a supposedly inconclusive verdict about just who murdered Palestinian journalist Shireen Abu Akleh issued by the State Department," Omar Zahzah, an organiser with the Palestinian Youth Movement, told MEE.

"The imperialist capitalist US government has long made it clear that Palestinian life, dignity and freedom is worthless to its oppressive interests and investment in the subjugation of the Global South." 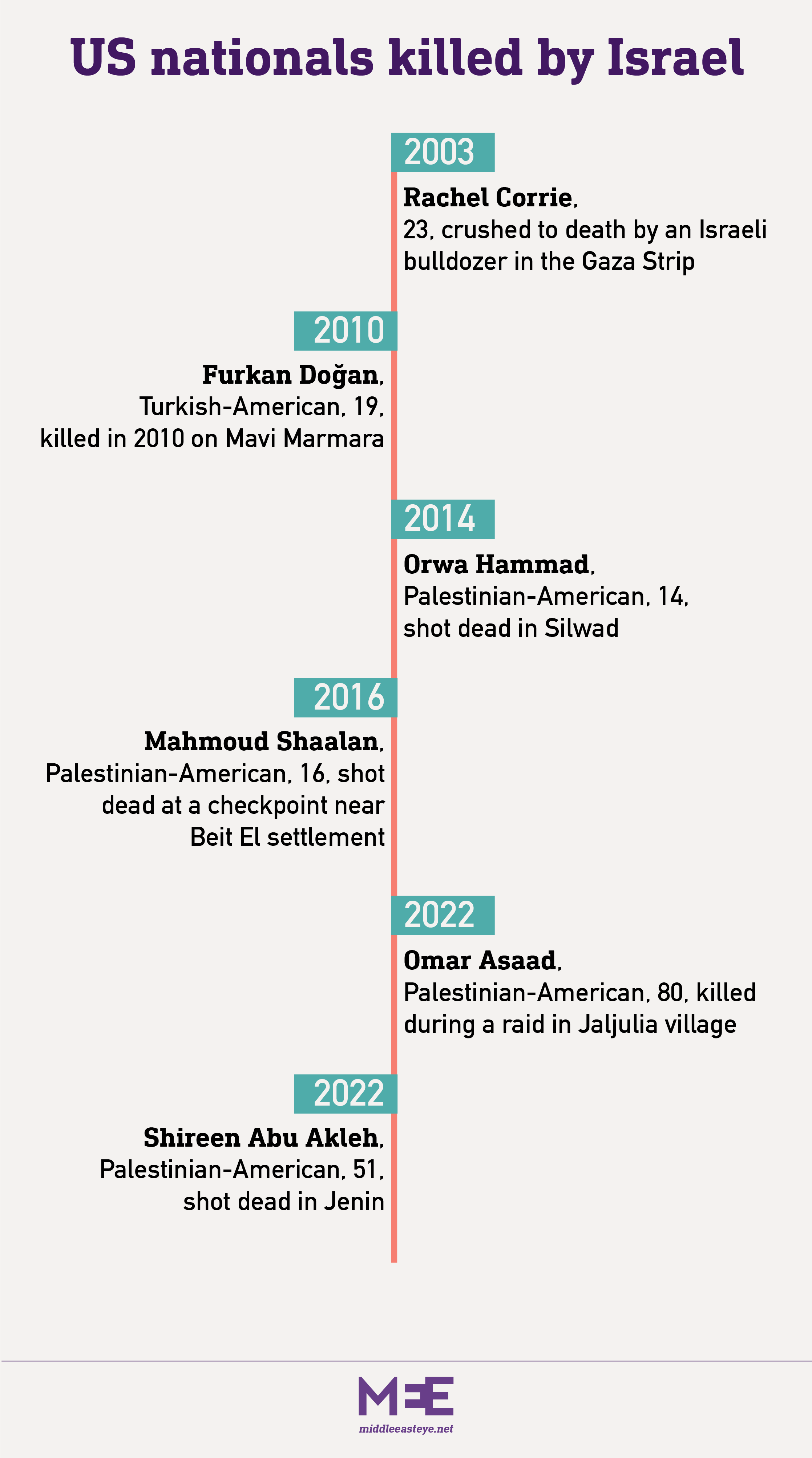 In its statement, the State Department said its investigation found "no reason to believe that this was intentional but rather the result of tragic circumstances". It said that the incident had taken place "during an IDF-led military operation against factions of Palestinian Islamic Jihad on May 11, 2022, in Jenin, which followed a series of terrorist attacks in Israel".

The family, as well as activists who spoke to MEE, noted that the focus on the bullet that killed Abu Akleh was an attempt to spin the narrative around what happened, rather than seek actual accountability.

"The focus became on the bullet and which gun fired the bullet and all of these sorts of stupid things, rather than on what we know to be true," Buttu said.

"It's because she was reporting on [Israel's] military occupation that she was killed."

Buttu said that given Israel's advanced military capabilities and sophisticated technologies, she has doubts Israel does not know the identity of the killer.

In 2018, the Israeli forces posted a now-deleted tweet in which they said, "We know where every bullet has landed" after 773 Palestinians in Gaza were shot with live ammunition from Israeli forces during mass demonstrations.

"They have the system of being able to know where their soldiers are and who's doing the firing. They know the person who shot Shireen. For sure they do. This isn't a question in the dark," Buttu said.

Ramzy Baroud, a Palestinian-American journalist and author, told MEE that he believes it was a mistake to even allow the US to take part in the investigation, to begin with.

"Giving the State Department the opportunity to opine on the subject has both validated the US view on the matter and greatly confused the existing body of evidence, which seemed conclusive in asserting that Shireen was murdered by Israel," Baroud said.

In a news conference on Tuesday following the release of its assessment, State Department spokesperson Ned Price doubled down and said that "they found no reason to believe that it was an intentional killing, but rather the result of tragic circumstances in the course of a raid".

Price added that Washington would continue to call for accountability, saying "this clearly was the case of a wrongful death".

"Our goal – and what we believe is the collective goal of the parties – is to see to it that something akin to this, the killing of a journalist in a conflict zone, can’t happen again, must not happen again," Price said.

Yet just several weeks after Abu Akleh's death, another Palestinian journalist, 31-year-old Ghufran Harun Warasneh, was shot and killed by Israeli fire in the occupied West Bank city of Hebron. It was her third day of work at her new job at a local media network.

Palestinian advocates say Washington's assessment of the killing is another attempt to sweep the killing of a Palestinian and US national at the hands of Israel under the rug.

In January, Omar Asaad, an 80-year-old Palestinian American, died of a heart attack after he was violently detained by Israeli soldiers during a raid on Jaljulia village, north of Ramallah in the occupied West Bank.

An Israeli army probe led to the dismissal of two officers, something the Israeli human rights group B'Tselem described as a "slight rebuke". 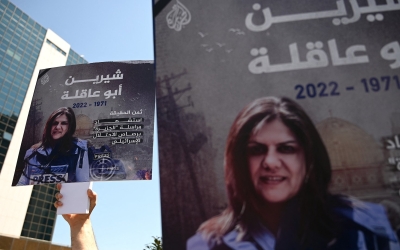 Still, Noura Erakat, a Palestinian-American human rights lawyer and professor at Rutgers University, told MEE that now is the time for the international community, and especially journalists, to increase their scrutiny over the probe into the killing.

"If we now know that Israel lies blatantly and can kill and get away with it, it should be imperative for journalists to now shift the way that they actually cover this issue with greater scrutiny," Erakat said.

"That's what accountability would look like, in my opinion. We're not going to get accountability for shootings and murder, but there should be a shift of how we interpret and understand information as a result of these findings."

On Tuesday evening, following the State Department's statement, a group of 11 Democratic lawmakers introduced legislation that would force the US government to investigate the killing and also investigate whether American weapons were used.

The legislation, spearheaded by Congressman Andre Carson, was submitted as an amendment to the National Defense Authorization Act (NDAA), which authorises the Pentagon's annual budget.

Ayah Ziyadeh, advocacy director at American Muslims for Palestine, said that accountability would begin with a suspension of "all military funding for Israel" and would end with those responsible for Abu Akleh's killing being brought to justice.

"In the meantime, it is simply unacceptable for the President of the United States to conduct an ordinary diplomatic visit to a state that practices apartheid, and this is especially the case on the heels of the killing of an American journalist by this apartheid government," Ziyadeh said. 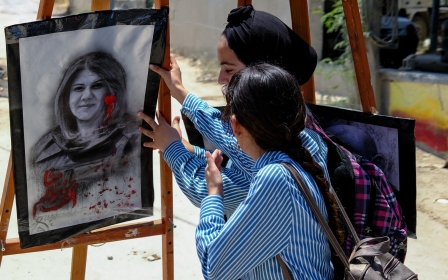