'We encourage people who are still young, who are not activists or Brotherhood to come and support,' said one of the volunteers 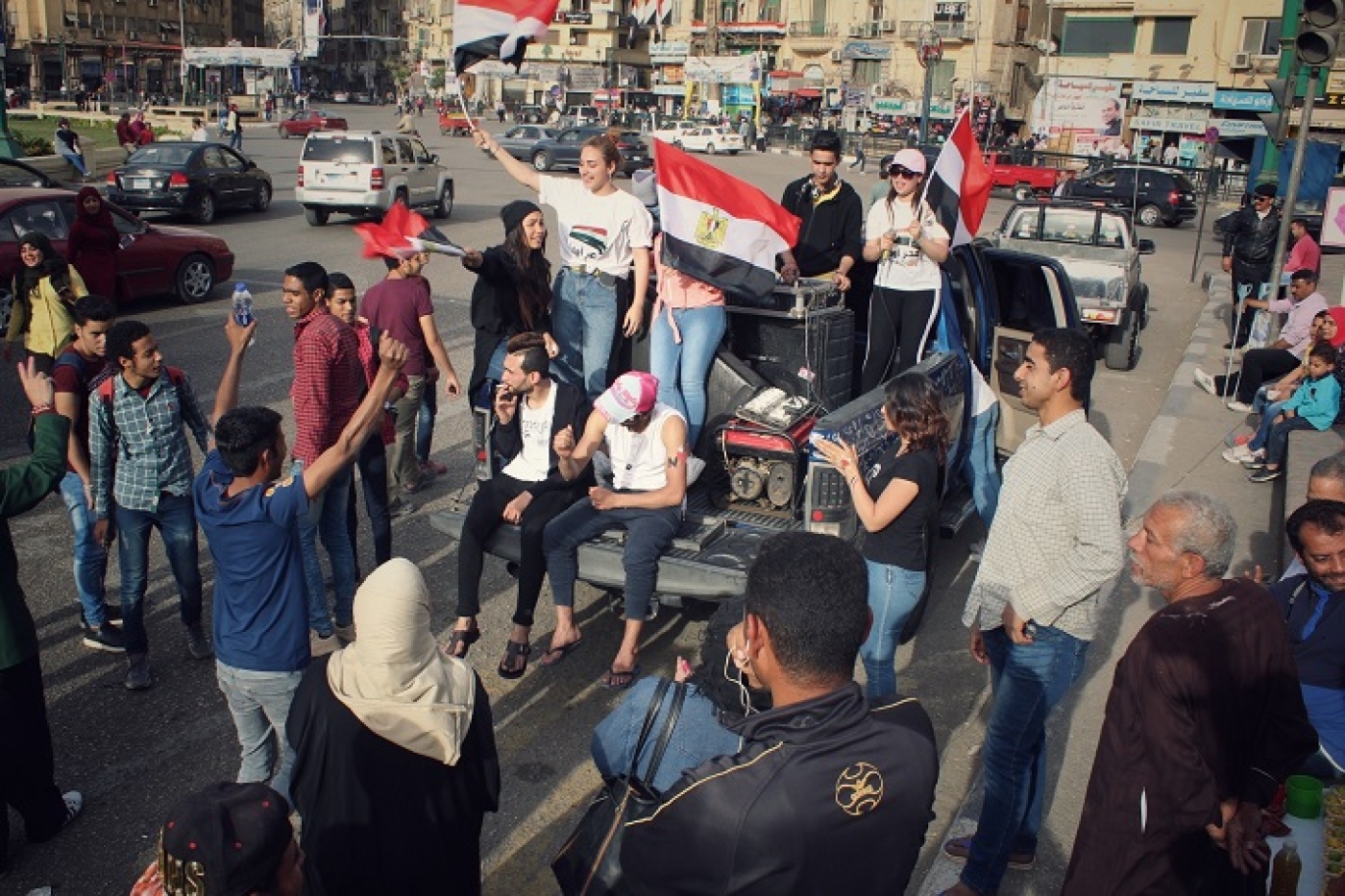 CAIRO - The Dodge truck rolled up to Tahrir Square, carrying six young boys and girls, a loudspeaker and an assortment of Egyptian flags.

Soon the pro-army songs started wailing, the young people started dancing and strangers gaped from the street, watching the spectacle.

Seven years ago, dozens of young poeple died in the revolution that started here. On Tuesday, the teenagers rallied elderly street vendors, beggars and street children and unofficial parking valets in full force to chant for President Abdel Fattah al-Sisi.

"I am here with my friends so we can motivate people to vote and so the world can see that Egypt is a free country," said Nehal, a 17-year-old private university student.

Nearby, Nehal’s friend Soha, another 17-year-old, took selfies with campaign posters, and then danced on the truck.

"I think boycotting should be illegal and people who do this should be jailed," Nehal said. When asked whether that was democratic, she said she didn't know what the word meant.

The Tahrir truckload are just one group of hundreds of young people in social clubs, universities and youth centres across the country who have been mobilised this week in campaigns sponsored by hardcore Sisi supporters.

In Cairo, two campaigns - "For the Love of Egypt" and "We are All With you for the Sake of Egypt" - were backed by the Ministry of Youth and In the Support of Egypt Coalition, the majority parliamentary bloc.

Along with impromptu street rallies posted on social media, the campaigners have largely focused on getting older Egyptians and government employees to the polls and escorting them to stations.

Two sources told Middle East Eye that adults associated with the campaigns had offered them food rations and money to lure them to the polls.

Saber, a For the Love of Egypt coordinator from Alexandria, told MEE that all of the campaign's popular events, which were done in the streets, were sponsored by the local governorate and attended by security officials and the members of the parliament.

“We knew that the turnout of youth will be low, so we encourage people who are still young, and who are not activists or Brotherhood members to come and support,” he said. “They will be the future leaders.”

'No time for opposition'

The attendance of young people in trendy outfits chanting for the government in the street is a new trend in Sisi’s Egypt. In the past, it's typically been older women in abbayas - long, body covering dresses - who do the swaying.

The former general, however, has made a point of supporting young people, launching at least four youth conferences and a programme to “produce future leaders" since he came to power.

'We are at a time of war. We should be all on the same page. You can’t come and say we need to focus on worker’s rights or such stuff'

One of those enrolled in the programme is Marianne, a political science graduate from the capital's chic New Cairo neighbourhood. This week, she has been out in the streets rallying to motivate her neighbours to get out and vote.

“We are at a time of war. We should be all on the same page. You can’t come and say we need to focus on worker’s rights or such stuff. We need to be focused on eliminating the danger,” she said.

“There is no time for opposition or different opinion.”

Some boycotters have said they refuse to vote because of the violence used against detainees in Egyptian prisons.

“What violence?" said Marianne. "A terrorist who is detained for killing soldiers should be humanely treated? Or a so-called activist who gets funds from outside to incite problems should be free?”

“All these detainees should go and live in the deserts in camps, so they can see that the police and the army are suffering every day," she said. “Let them go and improve the desert instead of costing the state millions by putting them on trial.”

Outside a polling station in Giza’s densely populated Al-Haram district stands a line of young girls, all in a uniform of white shirts and skinny black jeans, and a few young men, some with tatoos.

With Egyptian flags in hand, they welcomed voters, who were mostly older people, and handed out water bottles.

Amir, a stylish young man standing with the group, asks an army officer whether he can speak to MEE and then said: "People should come and vote. If they don't, they should shut up."

However, not all the young people who were roaming the capital in Dodge trucks were part of the campaigns.

Medo, a casting manager, has been going on social media calling for young, unveiled models “to stand in front of the polling stations”.

When asked about who funded his casting call, he refused to comment.