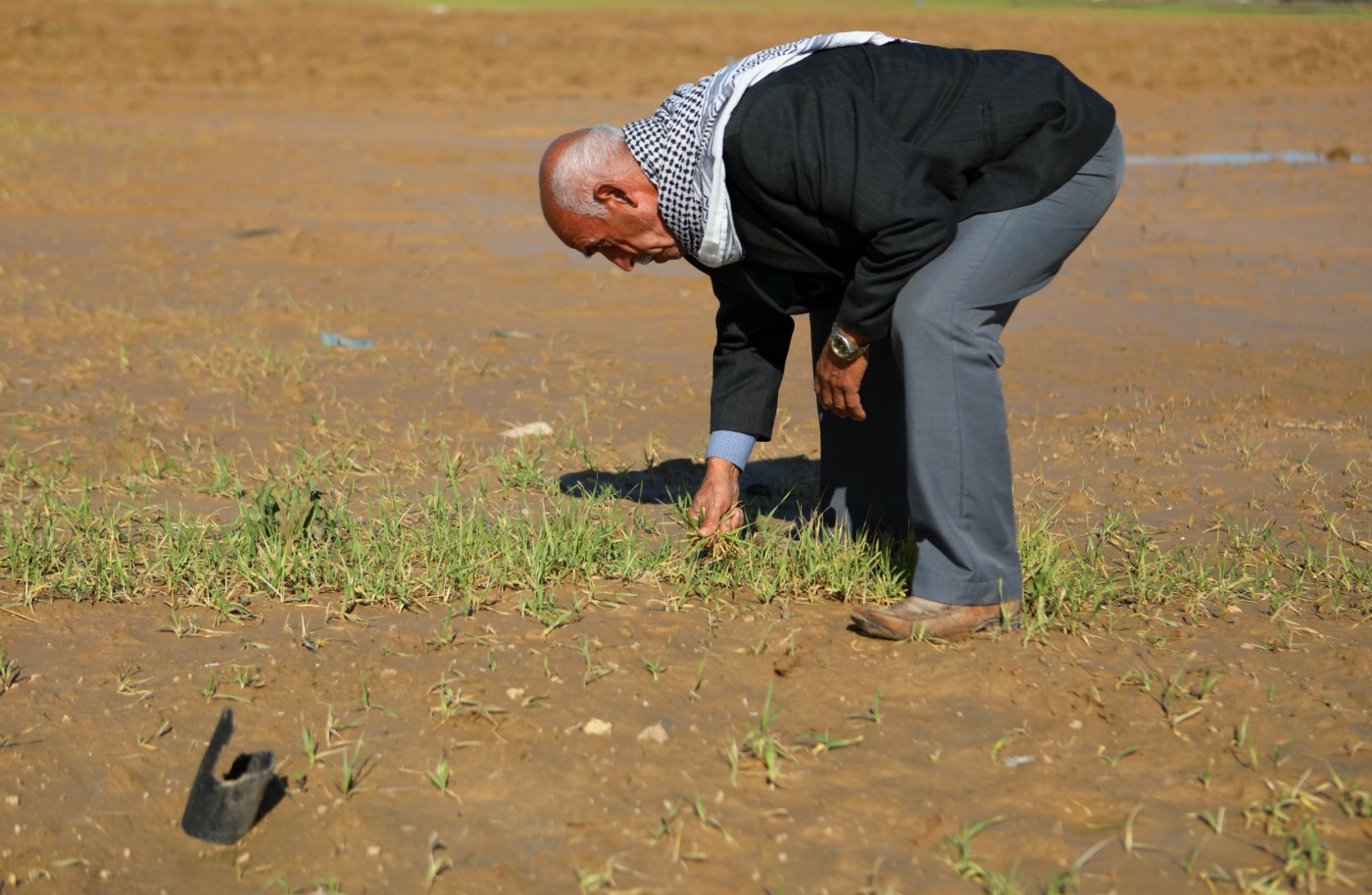 For five months, Palestinian farmers like Naim al-Khaissi had cultivated and irrigated their lands in the besieged Gaza Strip, waiting for the end of January to harvest vegetables from eastern farmlands located close to the separation barrier with Israel.

But after all of their hard work, Palestinian farmers woke up to the news that Israeli authorities had emptied out the nearby rainwater storage, effectively flooding Gaza crops only a few days before harvest season.

According to the Palestinian Ministry of Agriculture, Israel's opening of the dam's gates caused more than $500,000 worth of damage to more than 332 hectares of land in January alone.

The agricultural lands in the Israel-imposed "buffer zone" near the separation barrier constitute a source of livelihood for hundreds of Palestinian families and serve as Gaza's main source of fruits and vegetables.

The flooding comes amid other measures Palestinians say are being deliberately applied by Israeli forces to affect the impoverished besieged territory's food supply and push farmers off their lands.

Khaissi, 75, has been a farmer since 1962. He used to own almost 10 hectares of land before 2005, when Israel evacuated settlers from the Gaza Strip. But he saw the vast majority of his land fall out of his reach in the buffer zone.

"I grew up as a farmer when my father and grandfather taught me the profession, but things have changed a lot since then. We have lost a lot of our lands and can barely reach the rest," he told Middle East Eye.

"I planted so many kinds of crops last September, including cabbage, potatoes and onions, and was waiting for the end of January to harvest them. But after Israel opened the rainwater storage four times last month, the crops were completely destroyed."

For Khaissi, the flooding of Palestinian lands was a deliberate move.

"Israel intended to flood the farmlands at this time of the year in particular after they made sure we put in all our effort and spent a lot of money on growing our crops and were finally ready to harvest," he said.

Khaissi said he lost more than 10,000 shekels ($2,900) due to the damage caused by the flooding - but he considers himself lucky compared to other farmers.

"I lost much less than my neighbours because I currently have only two acres [just under one hectare], but those who have five or six acres lost a fortune," he said.

The farmer estimates that Israeli practices - such as flooding, the levelling of lands by army vehicles, and the spraying of chemical herbicides - have cost him more than $111,000 in damages since 2004.

"They do this systematically to force us to give up on our lands and leave," Khaissi said. "But no matter what they do, we simply cannot leave. It is taking care of the land that keeps us alive."

Shortly after the agricultural lands were flooded, Palestinian farmers say they saw Israeli crop-duster planes spray chemicals believed to be herbicides into Gaza.

"We saw Israeli soldiers burn a tyre near the fence to identify the direction of the wind," said Aref Shamali, a 40-year-old farmer. "When they saw that the smoke blew west, meaning that the chemicals could reach vast areas inside Gaza and cause maximum damage, they sent the crop-duster and sprayed all the crops." 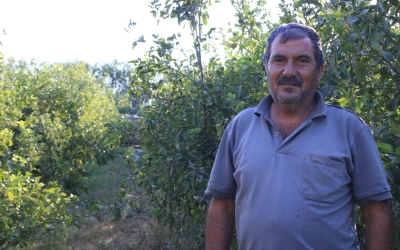 Danger from above: Gaza farmers struggle to save crops from Israeli planes
Read More »

The Israeli army regularly claims that the herbicides are used to clear vegetation in the buffer zone on the Gaza side of the fence in order to have a clearer view of the area for military purposes. But Palestinians say the policy inflicts wide-ranging damage on residents of Gaza.

"The chemicals and herbicides they spray not only damage the farmlands, they also have catastrophic consequences if people eat the sprayed crops," Shamali told MEE. "A few days ago, representatives from the Ministry of Agriculture rushed to the markets where some farmers sold what were believed to be sprayed crops, and damaged all the products before people could buy them."

Shamali and his brothers own about 24 hectares of land, almost all of which was damaged before the January harvest, causing an estimated $20,000 loss.

"No farmer was lucky or safe," he said. "They [Israelis] claim they only spray pesticides, but who is naive enough to believe they are taking care of our farmlands for free?

"This area feeds almost all residents of Gaza City, that is why they are always targeting it," Shamali added. "They want to displace farmers and prove to them that their efforts are not worth it."

According to Wahidi, the chemicals sprayed not only damage the crops, but also affect the soil, harm farmers and animals, and pollute the groundwater.

"Even if they [Israel] want to spray perfume [into Gaza], they do not have the right to do so without coordinating with the affected party to mutually agree on the substance, its amount, and the way it is sprayed," he told MEE. "Why do they not at least coordinate with the Red Cross so that farmers and their children are not affected?"

The expert said the exact content and impact of the pesticides remained difficult to ascertain.

"We cannot identify the extent to which such chemicals are poisonous. Such examinations need devices that are not available in the Strip, and Israel strictly prohibits any attempts to send the substances outside Gaza for examination," he said. "The process is very complicated."

While the correlation has not been officially established, Palestinian farmers blame the chemicals for health issues they have dealt with for years - and expressed fears that such negative consequences could also affect those who eat the tainted produce.

"I suffer chronic breathing problems," farmer Ismail Abu Zor told MEE. "There are so many reasons we have breathing problems. For example, last time I was farming with my son, Israeli soldiers fired a tear gas grenade just between the two of us. We did not do anything wrong, they just wanted us to stop cultivating crops in the area."

The 46-year-old said Israeli soldiers deployed along the buffer zone area often open fire towards farmers to prevent them from working.

"You do not have to walk near the fence or attack them to be targeted; growing a tree may be a sufficient reason for them to shoot you," Abu Zor said. "Every farmer in the Strip is suffering the consequences of Israeli practices that target them and their farmland regularly. Their message is clear: they do not want Gaza to rely on its own products to stay alive.

"You can say the residents are sentenced to a slow death." 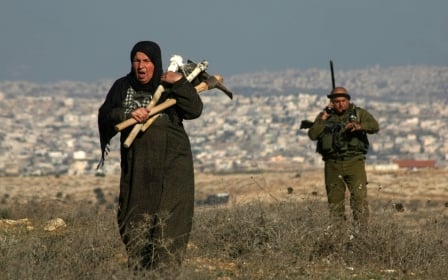 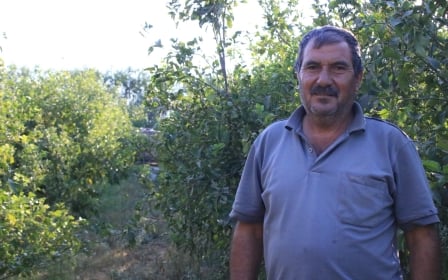 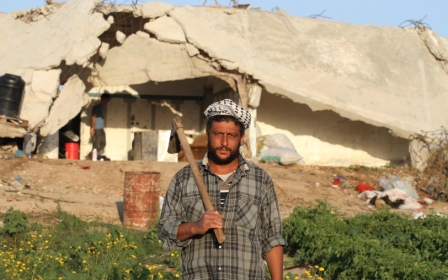 On Gaza's embattled margins, farmers wage a quiet struggle to reclaim the land