A year on from the 3 June killings, protesters have criticised delays in justice reforms and the investigation’s lack of transparency 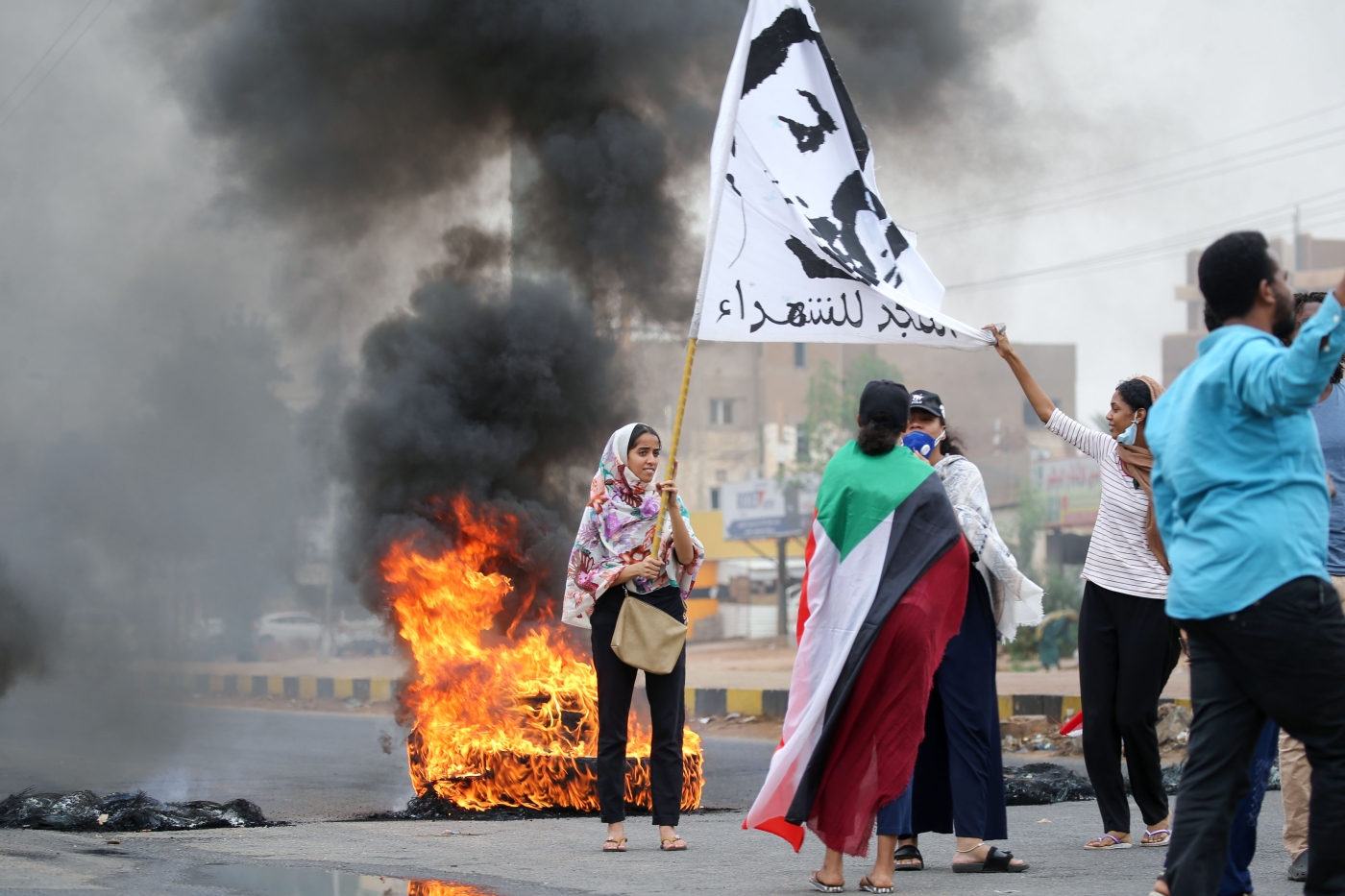 A Sudanese protester lifts a flag bearing the slogan 'glory to the martyrs' during a demonstration in Khartoum, on 23 May 2020, to commemorate the first anniversary of 3 June massacre (AFP)
By
Mohammed Amin
in
Khartoum

Almost a year after the infamous massacre in front of the army headquarters in Khartoum, activists and victims' families are still looking for justice for the 120 protesters killed, with families threatening to take the case to the African court.

Protesters and families of the victims gathered in the capital to mark the dark day of 3 June, which fell on the 29th day of the Muslim holy month of Ramadan, chanting anti-military slogans and demanding that the perpetrators be brought to justice.

The protesters criticised the transitional government for the delay in imposing justice and called for the removal of the investigation committee appointed by Prime Minister Abdalla Hamdok in September.

Meanwhile, families of the victims hinted they might seek justice at the African Court on Human and Peoples' Rights if they are not satisfied with the results of the investigation.

Facing growing popular frustration, the head of the independent committee Nabil Adeeb has defended its work, stressing that it is doing its job properly, a claim rejected by the protesters.

Kisha Abdul Salam, the father of one of the protesters killed in the massacre, said the family would never forgive until they see the killers of their son held accountable. Like many Sudanese, Abdul Salam has criticised the immunity law in Sudan’s new constitutional charter that protects members of the state from criminal proceedings, including Mohamed Hamdan Dagalo, or “Hemeti”, the head of the paramilitary Rapid Support Forces (RSF), which is widely accused of being behind the massacre.

The law however also states that the immunity may be lifted after an order from the Legislative Council.

“We believe that the investigation committee will not bring justice to our martyrs because the constitutional declaration has already put the Transitional Military Council (TMC) generals responsible for the massacre in top government positions with full impunity,” Abdul Salam stressed.

Abdul Salam, who is also a leading member in the Committee of the Families of the Martyrs, has accused the RSF along with the Sudanese Muslim Brotherhood of dispersing the sit-in and mass killing the protesters.

However, a member of the RSF, who asked for anonymity, has joined his voice to the protesters, urging the investigation committee to accelerate the work and declare the results.

“We are also waiting for the results of the investigation because we are confident of our position and we want to see justice and for the continuous conspiracies against us to stop,” he said.

The Sudanese Professional Association (SPA), a member of the ruling political coalition of the Forces for Freedom and Change (FFC), which led the protests until the ousting of longtime dictator Omar Bashir, has also held the TMC responsible for the June attack.

The SPA called for using the investigation into the massacre to highlight the importance of justice in the country.

Sudan’s grassroots resistance committees said they are waiting for the lifting of the curfew imposed to stop the spread of coronavirus to organise million-man marches to press for the acceleration of the investigation’s outcomes.

In a tweet on Saturday, Prime Minister Hamdok stressed that the achievement of justice for the “martyrs of the December revolution” is a top priority for the government and the transitional period.

But Abdul Salam has warned that if the families of the victims are not satisfied with local justice, they may seek international justice. He added that among the many discouraging signs has been the delay in implementing reforms to the justice system, as dictated by the constitution.

Abdul Salam also revealed that they have requested to be represented in the investigation committee through they lawyers, but their request was not granted, which they believe has thrown doubts over the impartiality of the results.

“We are in contact with many international and regional organisations of justice and human rights in defence of our rights,” he said.

“So, we are waiting for the results of the investigations and, accordingly, we might file our case to the African court in Gambia.”

Meanwhile, the director of Human Rights Watch (HRW) for East Africa region, Jehanne Henry, has called for international participation in the investigation committee.

Talking to MEE, Henry highlighted the importance of probing the different cases of violence against protesters in Sudan.

“We did urge the transitional government to allow international experts to participate in this investigation and to extend the mandate to all crackdowns on protesters, not only for June 3,” she said. “Such a mandate and resources would have helped ensure independence of the committee.”

A group of more than  700 Sudanese lawyers, human rights defenders and activists have widely circulated a petition calling for the removal of the head of the investigation committee.

The memorandum, which was submitted to Hamdok, claimed that Adeeb, who is also a lawyer, has practised law during his role as head of the committee, which is prohibited during the period of his assignment as a way to prevent corruption and delays in the investigation.

In an interview with Al-Quds al-Arabi, Adeeb said that criminal charges in the 3 June case will be directed against individuals and not the institution they belong to.

Independent lawyers have also filed another petition to the investigation committee requesting that it deals with the 3 June case as a crime against humanity, adding that the massacre was the result of a collective order made by the TMC, which currently rules the country, and should therefore be tried accordingly. 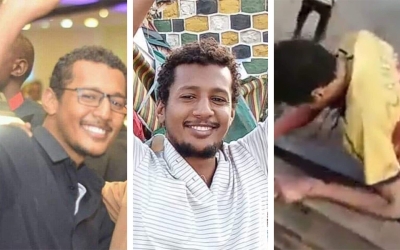 However, Adeeb has defended his position and rejected the calls for his removal.

He also rejected accusations of being involved in defending figures of the former regime, telling MEE that the allegations are “incorrect information by propagandists in the social media”.

“The issue of individual responsibility has unfortunately revealed that the committee is not dealing with the case as a crime against humanity," Agab told MEE

“It’s taking rather a narrow definition of criminal responsibility. Such an approach is a waste of time and would definitely obstruct justice.”

Additionally, HRW’s Henry noted that the immunities granted under the Sudanese criminal law are worrying, but they can be waived.

“So there are really no technical reasons why those responsible at the highest levels could not be brought to justice,” she said.

“It is just a question of political will at the end of the day.”

But Adeeb has insisted that the committee’s relationship with the both the TMC’s civilian and military components is going well, but declined to divulge how many TMC generals or other military or security personnel have had their immunity rescinded.

“I can say that the civilian and military components are being cooperative with us and they respond positively to our demands, but I prefer not to talk about the lifting of immunity in public because that may impact the course of the investigation,” he said.

The committee has been accused of lack of transparency, which Agap said was affecting public opinion on the case and causing doubts.

The lawyer has demanded that the committee declare the procedures it has done so far.

“The committee has enough powers. However, we don't know what it's doing. The committee should inform the public about its work,” he said.

'Lack of transparency has only one meaning, that it failed to achieve the minimum of its objectives and it fears facing the public with its failure'

“Lack of transparency has only one meaning, that it failed to achieve the minimum of its objectives and it fears facing the public with its failure.”

Henry believes that the committee has attracted wide criticism for its slow pace and inaccessibility, especially for the victims of gender-based violence.

“We hope that the report will be made public and that it will consider the role of commanders in charge of the forces that perpetrated the June 3 attacks,” she said.

When asked about it, however, Adeeb disagreed and said that secrecy is important for the progression of the investigation.

“Because we have to be professional … It’s also important not to declare all the information before the end of the investigation because that may affect the case itself,” he said, adding that it also might compromise the evidence.

Adeeb also said that he may need more time to conclude the investigation, but added that the process is in its final stages.

“The circumstances of the lockdown due to the corona has obstructed our work for around three weeks, so we may need to extend the time again in order to make perfect results of our work,” he said. Sudan in Transition
To the people of Sudan, Hemeti is no peacemaker
Hatim Eujayl