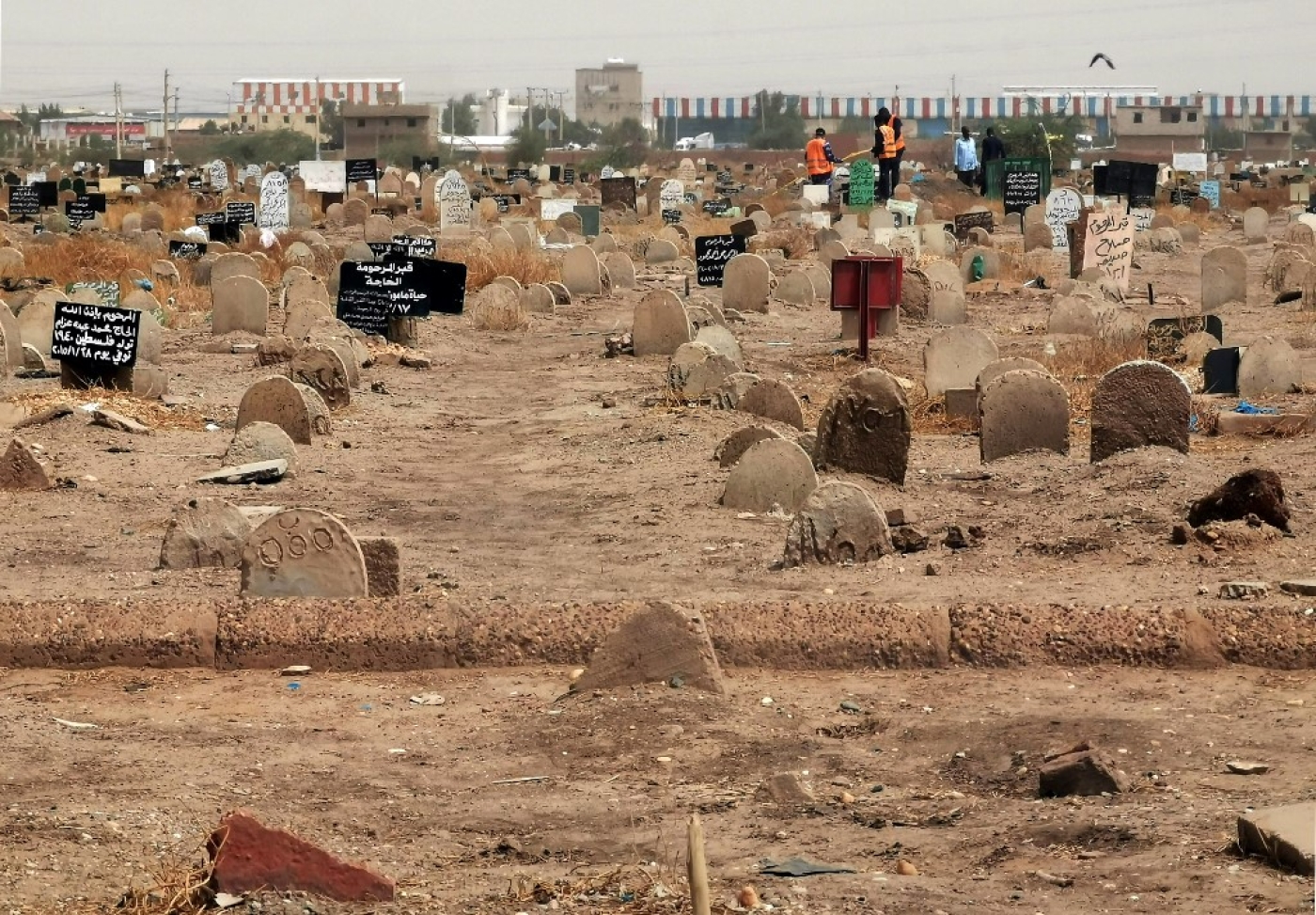 Members of a forensic team at a cemetery, where a mass grave of conscripts killed in 1998 was discovered in Khartoum, on 13 June 2020 (AFP)
By
Mohammed Amin
in
Khartoum

Sudan’s general prosecutor announced in mid-June that two mass graves, containing the bodies of dozens of military officers and secondary school students, had been found in Khartoum.

The bodies are believed to be the victims of extrajudicial killings by Bashir’s security agencies, but investigations are underway to uncover the full circumstances of the deaths. One of the mass graves, according to preliminary findings by an investigative committee, is believed to hold the bodies of 29 military officers who were allegedly engaged in a coup attempt in 1990 against Bashir.

The second mass grave contains the remains of dozens of Sudanese students who were believed to have been killed at a national military service camp in 1998.

The findings may present new evidence against members of the Bashir leadership, 23 of whom already languish in prison, including Bashir himself. They are also likely to incriminate more senior officers who are currently at large.

A source from the investigative team told MEE that some 40 bodies have been found in a mass grave in the neighbourhood of Al-Sahafa.

Public prosecutor Tagelsir al-Hebr had announced the discovery of the mass grave in mid-June, without mentioning the number of bodies found there.

At the time, he said that the remains belonged to students from the Eifalun military camp who fled military service in 1998, and that the suspected killers had already escaped the country.

The camp was used to train conscripts before sending them to fight the Sudan People's Liberation Army (SPLA) in the south.

Opposition groups accused the Khartoum government at the time of killing at least 100 students in and around the Eifalun camp in 1998, while the government claimed that 55 young conscripts who fled the military base drowned when their overloaded boat capsized in the Blue Nile river.

Under Bashir, military service was compulsory for men ages 17 to 40. Conscripts were used in the civil war against rebels in the oil-rich south, which seceded in 2011 and became the state of South Sudan.

Secondary school students were required to serve in national military camps as a precondition for being admitted to university in the future.

A lawyer working closely with the investigative committee said that the remains were now examined by forensic medicine specialists who are trying to determine the causes of their deaths.

The lawyer, who spoke to MEE on condition of anonymity because he was not authorised to talk to the press during investigations, said that the former government had closed the legal case involving the students, claiming that they had drowned in the Nile river while trying to flee the camp.

He added, however, that even if they had indeed drowned, an investigation should have been conducted to reveal why and how the incident took place. ‘Suspect still at large’: Why Sudan hasn’t handed Omar Bashir over to the ICC
Read More »

The lawyer further said that there were many signs that some of them have been thrown into the river after being shot dead.

Describing the killings as “a crime against humanity”, the lawyer said there had been a forcible recruitment campaign at the time to send young people to the battlefield in the south.

“It is a complex crime against humanity: they recruited children, sent civilians to war zones and forced them to fight,” he said.

“It can be classified as a crime of enforced disappearance as well as torture,” he added.

However, the head of the defence team for Bashir and his 23 imprisoned senior officials, Mohamed al-Hassan al-Amin, has denied Bashir’s involvement in the incident, describing it as “a political and vindictive” move.

“If we take the context of the 1990s into account, we will find that the country at that time faced a wide range of attacks from different directions by rebels supported by other regional and international states,” he told MEE.

“The Bashir regime had a legal right to defend itself, so it opened camps to train individuals who were willing to defend their country, introduced the national military service law, and formed national defence forces to protect the country,” he added.

“Regardless of any violations that need to be investigated, the conscription was not an illegal act, because no one was forced to go to battle areas against their will.”

Abdo Mohamed, now 39, was only 17 years old in 1998 when he finished his secondary school and prepared himself to join university.

However, he had to join the national military service in order to be considered for university admission.

Mohamed, who joined another military camp in Khartoum in 1998, told MEE that young people were arrested from the streets to join the war in south Sudan.

“What happened was not even real military training,” he said.

“They forcibly recruited thousands of youths and simply sent them to war,” he stated.

He further disclosed that he was among a group of young men sent to war in Juba city in then-southern Sudan, where he spent three months.

“We were sent to Juba without even knowing where we were going. We were forcibly shipped in a military plane from Khartoum. We tried to complain but we were threatened by the soldiers,” he recalled.

“We worked in Juba as military guards for three months, and some of our colleagues were sent to the war zones,” he added.

Self-defence against a coup

Meanwhile, another committee formed by the prosecutor general found a mass grave for 28 senior army officers last month near Khartoum.

'Bashir’s regime, like any government, had the right to defend itself'

“The team has found remnants of some bodies in the area of Karrary, south of Omdurman city, and the investigation is ongoing,” former national army spokesman Amer Mohamed El Hassan told MEE.

In 1990, Major General Abdul Gadir Elkadaro and Brigadier Osman Hamid, along with other officers, led a failed military coup against Bashir.

Widely known as the “Ramadan coup”, it ended with the extrajudicial execution of 28 army officers, including the coup leaders.

A source from the investigative team told MEE that the committee has already summoned and questioned a number of former army officers suspected to have been involved in the killings, including retired major general Altybe Mohamed Khair - also known as Altybe Sikha - who was one of the members of the military council under Bashir.

“It was a crime, and we need to investigate all aspects of it and to bring its perpetrators to justice,” the source told MEE.

However, Bashir’s lawyer Alamin once again denied the accusations.

“Bashir’s regime, like any government, had the right to defend itself. The current government is contradicting itself because it wants to prosecute Bashir for the 1989 military coup while denying him the right to resist the Ramadan coup,” he said.

“Even the current government has come to power through a military coup, so such acts are not reflecting the minimum requirements of a fair investigation and trial,” he argued.

Sudanese legal expert and human rights defender Ali Agab described the recently discovered mass graves as evidence of crimes against humanity, but added that Sudanese laws remain inadequate as a basis for prosecuting individuals for such crimes. To the people of Sudan, Hemeti is no peacemaker
Read More »

“These acts will be prosecuted as individual crimes because Sudan's criminal system did not include crimes against humanity at the time when they were perpetrated,” he said.

“The senior officers involved may be untouchable or protected either by virtue of their previous immunity or the [immunity of the] military council. So it is unlikely they will be punished,” he told MEE, nonetheless adding that "compensation for the victims’ families could be one outcome of the investigations”.

While Agab believes that the actual scale of mass graves and human rights violations in Sudan is much larger than what has already been found, he expressed hopes that the current investigations could be the beginning of a new era of transitional justice in the country.

“Sudan is in dire need of a comprehensive transitional justice project that includes the different historical crimes committed in the country over the last decades, to prosecute the criminals and compensate the victims, similar to the truth and reconciliation commissions formed in South Africa, Morocco and other African countries,” he said. 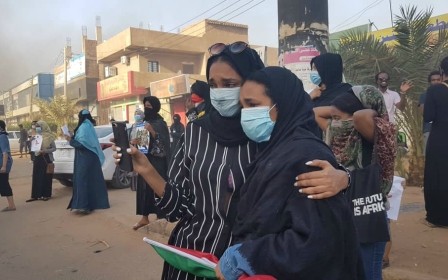 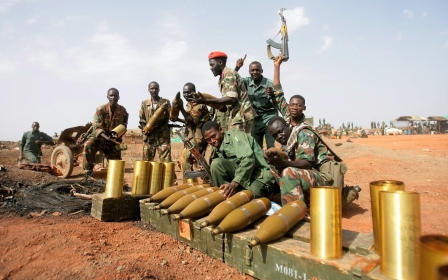