Sudan has reopened its airspace, the head of the country's sovereign council said on Wednesday, while the army said two soldiers were killed and four injured in the quelling of a revolt by former security agents linked to toppled ruler Omar al-Bashir.

Heavy gunfire erupted on Tuesday at National Intelligence and Security Service (NISS) bases in the capital's Riyadh and Khartoum North areas. The violence was the biggest confrontation yet between the old guard and supporters of the new administration, which helped oust Bashir in April after 30 years in power. A security source told the AFP news agency that the first shooting broke out in the city of Al-Obeid after which gunfire erupted at NISS bases in the capital.

In a speech early on Wednesday, the sovereign council head, Lieutenant General Abdel Fattah al-Burhan, vowed never to allow any coup to take place and added that the army was in control of all intelligence buildings.

"All headquarters are under the army's control, and the airspace is now open," Burhan said.

The activist-aligned Sudanese Doctors' Committee said three civilians from one family died during the fighting on Tuesday after a shell fell on their house.

In a protest over severance packages, former employees of the NISS also shut two small oilfields in Darfur, a government source told Reuters.

"In the process of restructuring NISS, there are some members who have rejected the financial compensation offered for retirement," the NISS said on Tuesday.

The fields had an output of around 5,000 barrels a day.

A government source said that the crisis revealed an internal conflict between the agents of the old administration loyal to Bashir on the one hand and the senior officers and generals of the national army and the sovereign council on the other.

The source, who asked for anonymity because he was not authorised to talk to the media, told Middle East Eye that following the restructuring of the NISS, soldiers had been given the chance to choose whether to be disarmed or to be integrated into the paramilitary Rapid Support Forces (RSF) or the national army.

"The soldiers who belonged to the operation unit rejected the options given to them, asking for a very high incentive and that has complicated the negotiations with them," he said.

"Islamists have wide influence among this force and that may disclose that the former regime is behind what is going on."

The former security agents fought soldiers in the capital, Khartoum, for hours until government forces quelled the revolt late on Tuesday, residents and a military source told Reuters.

A correspondent for AFP said several vehicles carrying soldiers and troops from the RSF had moved onto the bases.

Tanks were later seen surrounding the NISS base in Riyadh. Hundreds of people gathered outside the Riyadh base, calling on the army to put an end to the violence.

"The nation and army are one hand," the protesters chanted.

"What happened today is a plan by Salah Gosh and some other officers," General Mohamed Hamdan Daglo, who heads the RSF, told reporters in the South Sudanese capital of Juba.

Gosh, a key figure of Bashir's government, stepped down days after the veteran leader was toppled. His whereabouts are unknown.

Government spokesman Faisal Mohamed Saleh told state television that "troops from operating centres of the intelligence" started a "rebellion" in some parts of the capital.

Meanwhile the army chief of staff, Mohamed Othman al-Hussein, stated on Wednesday: "What happened on Tuesday is a revolt."

The two officers killed and four injured in putting down the revolt showed the military had been able to end it with minimal casualties, he added in a speech.

Restructuring the once-feared security apparatus blamed for suppressing dissent under Bashir was among the key demands of the uprising that had forced his removal.

However, once dismissed by the new transitional government, many of the security agents returned to their barracks without being disarmed, after leaving the ministries and streets they once controlled.

Sudan's prosecutor general called for removing the immunity of NISS personnel involved in the revolt.

'Those members of the intelligence involved in what happened today have committed a crime... I call for their immunity to be removed so they can face justice'

"Those members of the intelligence involved in what happened today have committed a crime... I call for their immunity to be removed so they can face justice," the prosecutor general said in a statement.

Sudan's protest movement, the Forces of Freedom and Change - a key part of the transitional government - urged residents to remain calm.

"We are calling on our people to be calm and not give a chance to those who want to drag our homeland into bloodshed," it said.

'We will continue our sacrifice'

Since August, Sudan has been run by a joint civilian-military body tasked with overseeing the country's overall transition to civilian rule as demanded by the protests that led to Bashir's fall. Some protesters said the current move was not just a small rebellion about disputes over financial compensation, but a bigger conspiracy to abort democracy.

"The Sudanese know well that what is happening today is a new cycle of conspiracy by the Islamists who want to abort the revolution and democracy," Samar Ahmed, 29, told MEE.

Another protester, Elimam Ahmed, vowed to remain steadfast in the face of the rebellion.

"We will continue our sacrifice to reach the great goals of the revolution, despite the conspiracies of the Islamists." 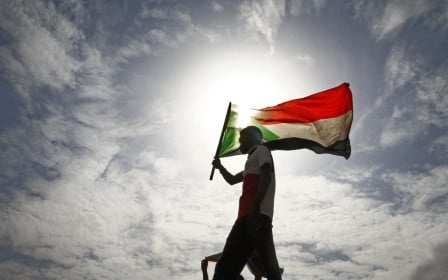