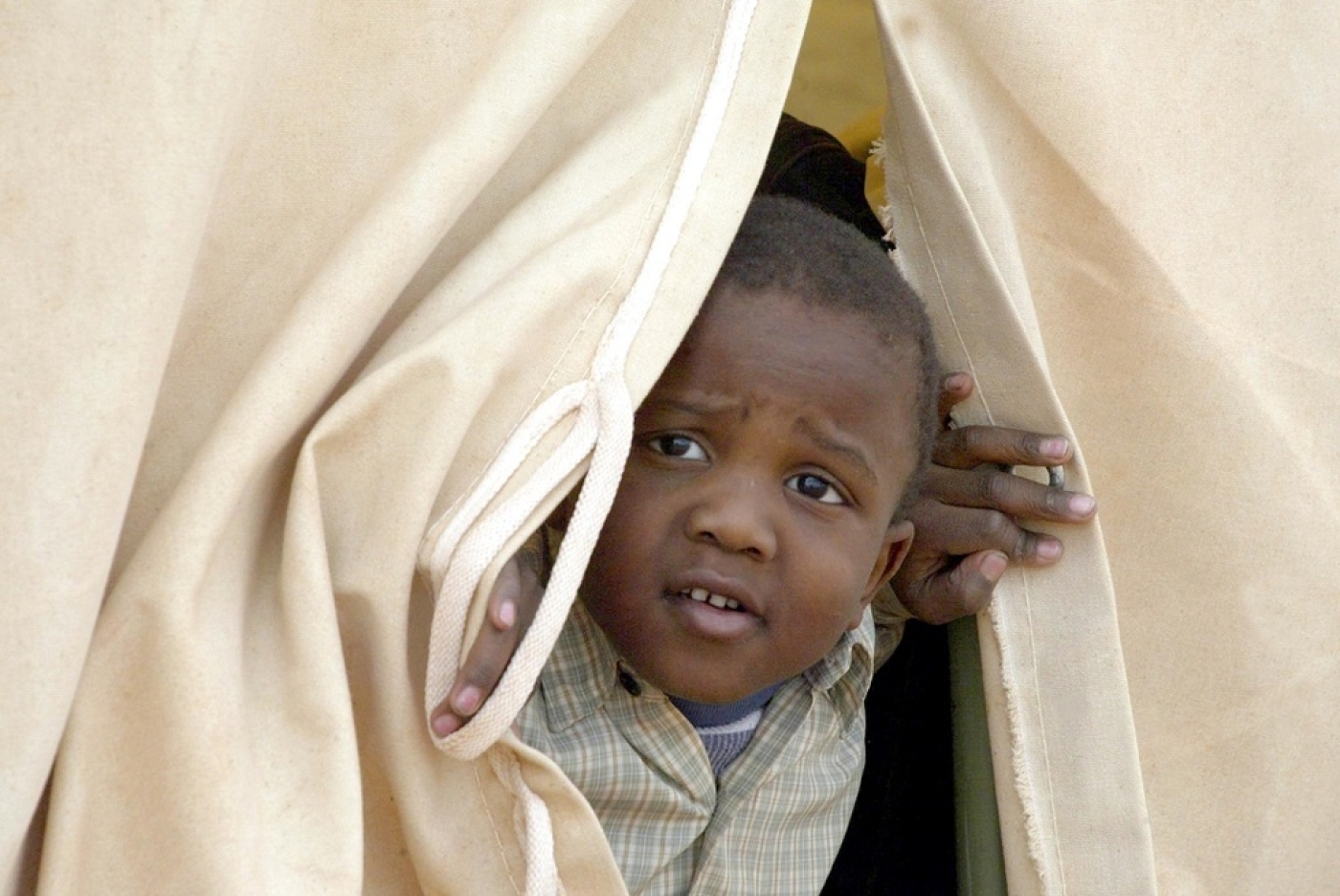 At the Amman office of the UN's High Commission for Refugees, the entire car park is covered by tents. They're pitched in rows, 40 or so squat domes of flimsy looking, brightly coloured plastic packed together. There is barely any space to walk between them. Nestled in the upmarket district of Khalda it's an incongruous scene, with tents bordering luxury flats and fast food restaurants.

The makeshift camp has been pitched by Sudanese refugees who are protesting against their treatment in Jordan. It's been home to some 200 people for more than four weeks now, with no end in sight to the crisis despite the onset of winter.

Jordan's Sudanese refugees are one of the country's most marginalised groups and say that the UN is discriminating against them. They are demanding more support for housing, education and healthcare. They're also calling for resettlement - relocation from Jordan, where the refugees have found themselves trapped and unable to start a new life.

“We’re protesting here because the Jordanian community does not accept us, because there is racism against us,” Ali Yehya Abakar told Middle East Eye. The 26-year-old from Darfur arrived in Jordan in 2013, and he's now one of a group of young men watching over the protest camp, dressed in a woolly hat and scarf against Amman's winter cold. “The UNHCR does not give us support.”

Like most of the refugees involved in the protest, Abakar has pledged to stay until the UN offers a solution to their plight. Many say they simply don't have anywhere else to go. Refugees aren't legally permitted to work in Jordan and the cost of living is high even by international standards, so faced with crippling rents and the prospect of unsustainable loans many refugees are making the protest their home instead.

One refugee, who works as a volunteer liaison between the UN and his community and wished to remain anonymous, told MEE that few Sudanese receive financial assistance.

Compared to refugees from other countries, such as Syria, he believes refugees from Africa get a raw deal. “The situation for Sudanese refugees is very dangerous in Jordan,” he said.

“There's no services, we're not allowed to work. There is no help for the Sudanese refugees. There is no equality.”

The support the UN provides to the Sudanese community is indeed limited. Around 500 of the most vulnerable refugees get monthly monetary support, and emergency relief is also available in one-off cases of extreme need. Most refugees don't receive regular monthly support from the organisation. Many NGOs have also focused resources on supporting the 630,000 registered Syrians in the country, meaning that the Sudanese – who number around 3,500 – are often overlooked by international aid. As a result, most have to cover rent, food and other essential living expenses themselves, often from money earned in illegal, and thus low-paying and precarious, work.

Inside the Khalda offices, however, UNHCR spokesperson Helene Daubelcour said there was no discrimination between refugees of different nationalities. “We are listening to their requests and we are addressing them to the extent that we have the funds to do so” she told Middle East Eye.

“Their impression is that they receive less assistance than the others, but if you look, it’s done differently.” Despite constituting 0.5 percent of Jordan's refugee population, for example, she explained that the Sudanese receive 33 percent of the emergency cash assistance the UN provides.

Resettlement, too, is a fraught issue for all Jordan's refugee communities. Trapped for years in limbo in a country overwhelmed by high numbers of refugees, asylum seekers are anxious to leave to a country where they can start their lives. The UN, however, is limited by the small numbers of resettlement places that third countries offer. The situation has been made worse by the fact that some nations are now offering relocation specifically to Syrian refugees, leaving those from other nationalities – who equally say they are fleeing violence and persecution - feeling excluded from opportunities.

“We don’t do resettlement based on pressure. We do it based on vulnerability,” Daubelcour said. “We realise the refugees out here are asking to be resettled, but there’s only so much we can do.”

Around 2.9 percent of Sudanese refugees have been resettled, compared to 2.3 percent of Syrians.

For the people camped in the car park outside, however, the numbers don't change the daily struggle they face as visible outsiders in a crowded, expensive city.

Refugees say that endemic racism in Jordanian society affects every part of life: they complain of violent racist attacks, overcrowded and exploitative housing conditions, and tough work with low pay.

“We'll live eight, ten, seven people in one house. And the work we can get it's very dangerous work, in building,” the UN liaison source told Middle East Eye. “When the police come, we have to run. It's dangerous. Because they know we do not have the opportunity to get the work. Many people, they come down from the building, they break their arms, they break their leg, when they run from the police.

“We have to carry cement, that's very heavy, very hard work. And we work from six until seven. But even the money that's given to the people, it is not the equal rights,” he continued.

UNHCR was reluctant to comment on the particular discrimination faced by Sudanese in Jordanian society. “Whenever a refugee has a problem, like any person living in this country, he or she can go to the police,” Daubelcour said. “There is a law, if anyone feels they are a victim of racial comments, they are procedures in place in this country.”

The protestors, however, see things very differently. They say the police in Jordan don't work to protect them, and that they suffer racism from officials – a feeling amplified by the fact that refugees are forced to work illegally.

When racially-charged violent attacks, including shootings and home invasions, have been reported in the past, the police have claimed that they've launched full investigations, but refugees say the response is generally inadequate. And when Sudanese refugees demonstrated at the UNHCR last year, the police forcibly dispersed the action, beating protesters in the process.

“When we report it to the police, then nothing happens,” Abakar said.

Instead, Sudanese refugees' say their mainly interact with police when they try to crackdown on illegal labourers.

“We feel afraid to be around Amman after 10pm. Because the Sudanese we are working at night too,” Abakar said. “So our life is very dangerous.”

As the winter is becoming harsher in the Jordanian capital, the protesters are facing the prospect of below zero temperatures, health problems and declining sanitary conditions at the camp.

But as the protest stretches beyond a month, the settlement has an air of permanence about it. On the asphalt, kids wrapped in coats and hats play with broken polystyrene boxes they've found, while their mothers sort through washing. Jordanian security officers were keen to prevent journalists from speaking to the protesters, telling Middle East Eye that the press was prohibited from taking photographs or interviewing refugees without UN accompaniment.

“We have no right to talk,” Abakar said, as a police officer intervened to try and break up the conversation. “They have this way of treating us. We know the reason is that we are black, we are from Africa. Nobody cares.”

UN staff said they didn't wish to prevent protestors speaking with the media, and Daubelcour said she was concerned about the hygiene conditions and the danger posed by cold weather, particularly for the young children living there. She insists that there is a limit to the degree that the protesters' demands can be met. But the men, women and children staying in the car park still pledge to remain.

“This is how we live. You can see this situation is indescribable, it's destroying us,” Abdelqasim, another refugee at the camp, said.

“It is so shameful. When I enter inside the building they say that we have to go back. Where? There is no home where we can go back to. It is the reason we are demonstrating here. It will be forever. Because we have no other chance. This only our chance here.” Refugees
Refugee reality: If the face doesn't fit, you're not coming in