People hold signs of support near house of rabbi on Sunday in Monsey, New York (AFP)
By
MEE and agencies

A suspect appeared in a New York court on Sunday, charged with five counts of attempted murder over a stabbing spree at a rabbi's suburban house - the latest in a spate of attacks on Jewish targets.

He was ordered held in custody after denying the charges. Bail was set at $5m and Thomas was taken in handcuffs to a police vehicle and driven to Rockland County Jail.

The attack happened at about 10pm local time on Saturday, the seventh night of Hanukkah, with about 100 people gathered for a candle-lighting ceremony. It was quickly condemned as another incident underscoring growing antisemitic violence in the United States. 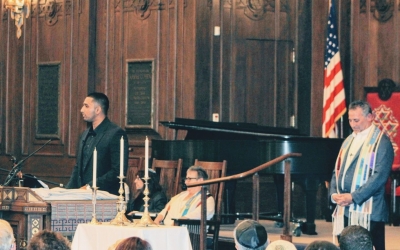 Muslims and Jews stand together in grieving Pittsburgh
Read More »

Council on American-Islamic Relations (Cair) National Executive Director Nihad Awad said in a statement: "We condemn this latest act of violence targeting a religious minority and express the solidarity of American Muslims with the Jewish community in New York and nationwide."

New York Governor Andrew Cuomo told reporters at the scene on Sunday that "this is terrorism, it is domestic terrorism… These are people who intend to create mass harm, mass violence, generate fear based on race, colour, creed". He said he wanted New York to become the first US state to have a domestic terrorism law, according to Reuters.

President Donald Trump tweeted that Americans "must all come together to fight, confront, and eradicate the evil scourge of anti-Semitism".

No details were released about the victims, who were rushed to nearby hospitals. Local media said one person was seriously injured.

Thomas was reportedly arrested in his car about 30 miles (50km) away, two hours after the attack.

One witness told how the weapon had a big handle and the attacker "swung it back and forth".

"Everyone was screaming and panicking and shouting 'out out out.' It was chaos," Joseph Gluck, 30, told reporters.

Last year a white supremacist walked into a Pittsburgh synagogue and shot dead 11 people - the deadliest attack against the Jewish community in the United States. Earlier this month, six people, including the two attackers, were killed in a shooting at a kosher deli in Jersey City, New Jersey, which authorities said was fuelled in part by antisemitism.

Saturday's violence in Rockland County was at least the 10th antisemitic incident in the New York and New Jersey area in the last week, according to the Anti-Defamation League, Reuters said.

As he did on Sunday, Trump denounced antisemitism after previous attacks, but some critics say his rhetoric has played a part. They blame him for stoking racial hatred with comments about Muslims and Latin migrants that some white nationalists have taken as confirming their position.

In response to the recent surge in hate crimes in New York, Mayor Bill de Blasio announced on Friday that the NYPD was stepping up patrols and increasing visits to places of worship.

After Saturday's attack, the mayor tweeted that he had recently spoken to longtime Jewish friends who were fearful of outwardly showing their faith.

"We will NOT allow this to become the new normal," he wrote. "We'll use every tool we have to stop these attacks once and for all."

In Israel, Prime Minister Benjamin Netanyahu said the country "strongly condemns the recent displays of anti-Semitism including the vicious attack at the home of a rabbi in Monsey, New York".

"It's a wave and a trend of hate-filled violence that is sweeping the country, not just NY State," tweeted Maya Wiley, a civil rights activist and senior vice president for social justice at the New School private university in New York. "We have to stand together to keep our neighbours safe." Antisemitism
Muslims and Jews stand together in grieving Pittsburgh