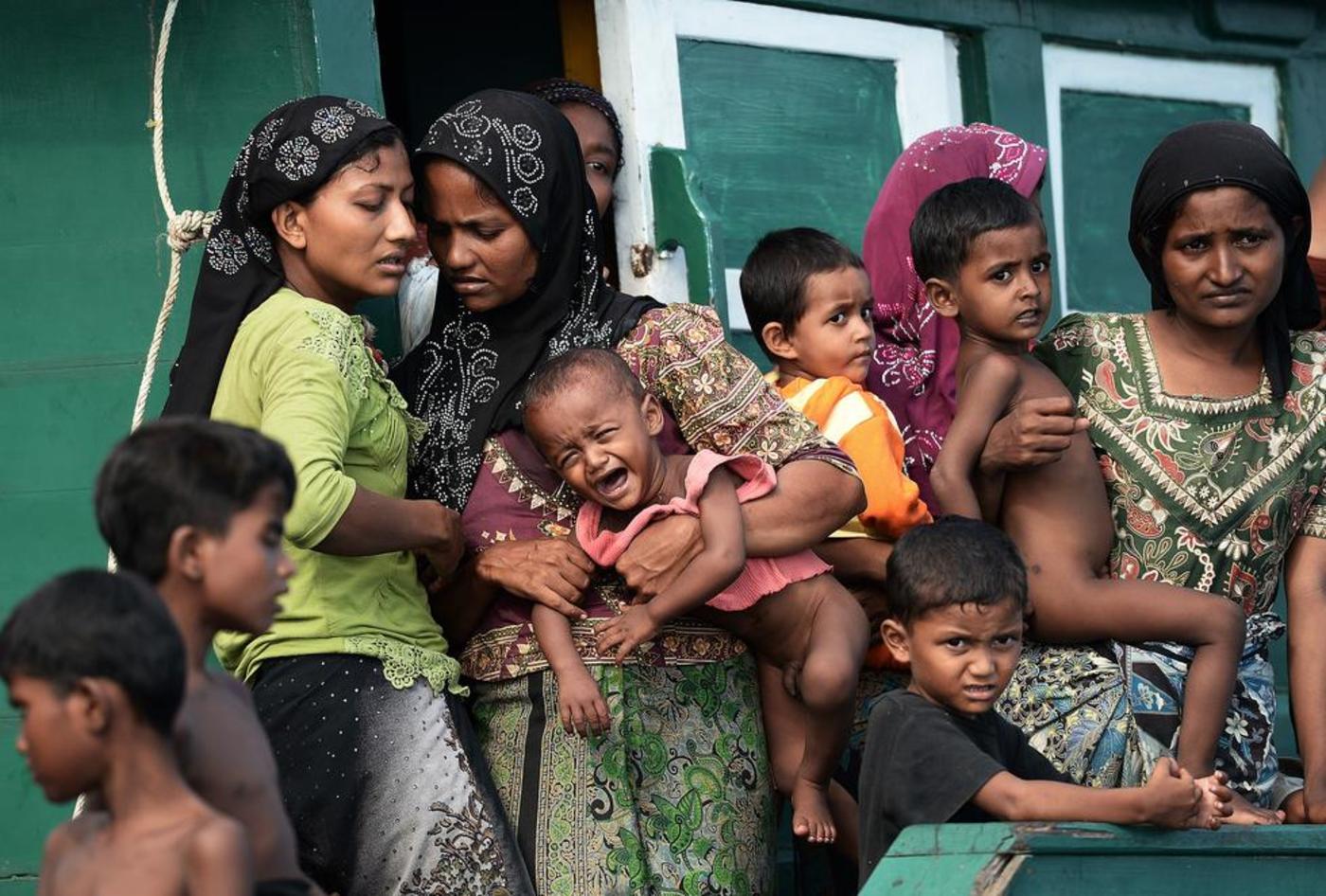 In less than a month, just under half of Rakhine's million-strong Rohingya minority has poured into Bangladesh, where they languish in overcrowded refugee camps (AFP)
By
AFP

Aung San Suu Kyi faced mounting criticism on Tuesday over what some world leaders are now calling the "ethnic cleansing" of Myanmar's Rohingya minority, despite her plea for patience from the international community.

The head of Myanmar's civilian administration pledged to hold rights violators to account over the crisis in Rakhine state, but refused to blame Myanmar's powerful military for the attacks that have driven 421,000 Muslim Rohingya out of her mainly Buddhist country.

But her speech, delivered in English and clearly aimed at deflecting international anger as world leaders gathered on Tuesday at the United Nations General Assembly in New York, failed to quell international anger at reports that the Rohingya are being burned out of their homes.

"The military operation must stop, humanitarian access must be guaranteed and the rule of law restored in the face of what we know is ethnic cleansing," French President Emmanuel Macron told world leaders gathered for the week of high-level diplomacy.

The United States has been careful not to blame Myanmar's civilian leadership for the attacks because the country's military retains control of security operations in troubled areas like northern Rakhine, but Secretary of State Rex Tillerson was moved to call Suu Kyi.

The military operation must stop, humanitarian access must be guaranteed and the rule of law restored in the face of what we know is ethnic cleansing

While Tillerson welcomed the pledge to crack down on abuses, he also urged both the government and the military "to address deeply troubling allegations of human rights abuses and violations" during the telephone conversation, his spokeswoman said.

Macron and Tillerson's concerns echoed those of UN Secretary-General Antonio Guterres, who issued a blunt demand that Myanmar halt military operations and of Britain, which suspended training courses for the Myanmar military in light of the violence in Rakhine.

"The authorities in Myanmar must end the military operations and allow unhindered humanitarian access," Guterres told the General Assembly.

"They must also address the grievances of the Rohingya, whose status has been left unresolved for far too long."

Amnesty International joined the outcry, saying Suu Kyi was "burying her head in the sand" over documented army abuses and claims of rape, murder and the systematic clearing of scores of villages.

And in New York, there was pressure from leaders like Turkey's President Recep Tayyip Erdogan and Nigeria's President Muhammadu Buhari, who compared the crisis to the 1995 Srebrenica massacre in Bosnia and the 1994 genocide in Rwanda.

"If this tragedy in Myanmar is not stopped, the history of humanity will face the embarrassment of another dark stain," Erdogan said, calling for the Rohingya being sheltered in Bangladesh to be allowed to return to the homes in which they "have lived for centuries".

In her long-anticipated speech, Suu Kyi - a former political prisoner and Nobel Peace laureate who won international acclaim for her role in campaigning for a return to elected rule in Myanmar - failed to offer any concrete way out of the crisis.

Supporters and observers say the 72-year-old lacks the authority to rein in the military, which ran the country for 50 years and only recently ceded limited powers to her civilian government.

An army-led fightback has left scores dead and sent hundreds of thousands of Rohingya fleeing into Bangladesh.

In her 30-minute speech, Suu Kyi reached out to critics who have condemned her failure to speak up for the stateless Rohingya and promised to repatriate refugees in accordance with a "verification" process agreed with Bangladesh in the early 1990s.

"Those who have been verified as refugees from this country will be accepted without any problems," she added.

In less than a month, just under half of Rakhine's million-strong Rohingya minority has poured into Bangladesh, where they languish in overcrowded refugee camps.

It was not immediately clear how many would qualify to return.

But their claims to live in Myanmar are at the heart of a toxic debate about the group denied citizenship by the state and considered to be illegal immigrants from Bangladesh.

Suu Kyi's repatriation pledge "is new and significant," said Richard Horsey, an independent analyst based in Myanmar, explaining it could allow for the return of those who can prove residence in Myanmar - rather than citizenship.

If the government is honestly speaking to resolve our crisis, then we are ready to go back now

But in the monsoon-soaked shanties in Bangladesh, there was anguish among refugees over how they would meet any requirements.

"We don't have any papers," said 55-year-old Abdur Razzak.

"If the government is honestly speaking to resolve our crisis, then we are ready to go back now," he added. "Nobody wants to live in such squalid conditions as a refugee."

But AFP reporters have seen homes on fire in the days since then, while multiple testimonies from refugees arriving in Bangladesh suggest such operations have continued.

Without blaming any group, Suu Kyi promised to punish anyone found guilty of abuses "regardless of their religion, race or political position".

And she insisted Rakhine was not a state in flames, saying: "More than 50 percent of the villages of Muslims are intact."

Around 170 Rohingya villages have been razed, the government admits. Rights groups say satellite evidence shows the damage is more widespread.

While stories of weary and hungry Rohingya have dominated global headlines, there is little sympathy for them among Myanmar's Buddhist majority.

Around 30,000 ethnic Rakhine Buddhists as well as Hindus have also been displaced - apparent targets of the 25 August attacks by the Arakan Rohingya Salvation Army.

Loathing for the Rohingya has brought the public, including pro-democracy activists, into an unlikely alignment with an army that once had them under its heel.

Suu Kyi's speech was warmly welcomed in Myanmar, even though no Burmese subtitles were provided.

"She told the real situation to the world on behalf of Myanmar people," Yu Chan Myae told AFP.