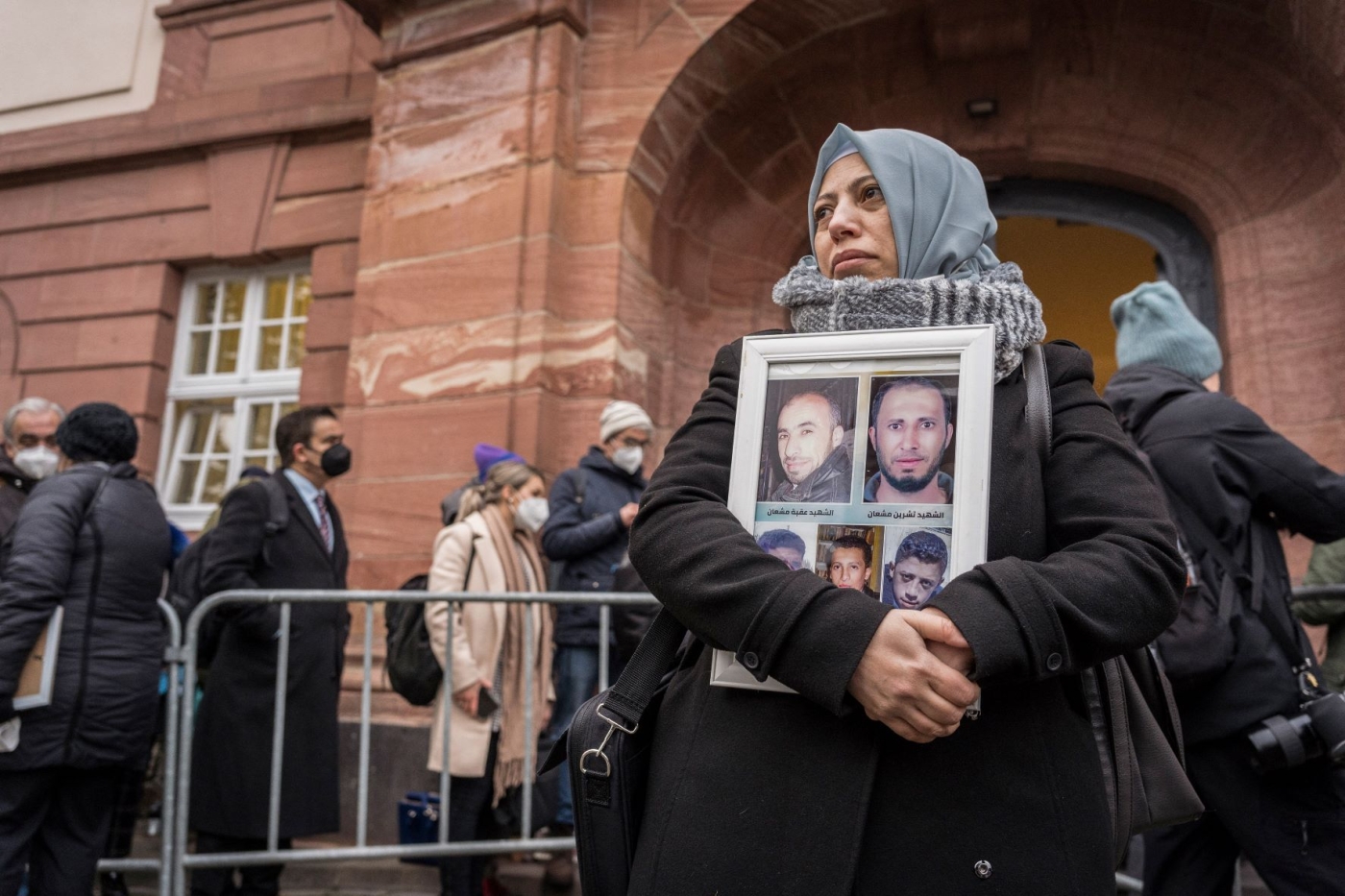 Syrian campaigner of the Caesar Families Association Yasmen Almashan holds pictures of her brothers outside the courthouse where former Syrian intelligence officer Anwar Raslan was convicted in Koblenz, western Germany on 13 January 2022 (AFP)
By
Alex MacDonald

A senior Syrian intelligence officer has been sentenced to life in prison in Germany for crimes against humanity following a landmark trial campaigners hope could open the door to further prosecutions.

Anwar Raslan was commanding officer of a prison controlled by Syria's notorious Branch 251 intelligence unit - in this role he allegedly oversaw the torture of at least 4,000 people between 29 April 2011 and 7 September 2012.

Syrian activists gathered outside the courtroom in the German city of Koblenz, many holding banners and posters with photos of loved ones who suffered under the government of President Bashar al-Assad.

Yasmin Sharbaji, a campaigner whose brother and father were both arrested and disappeared following the 2011 uprisings, said Raslan's conviction could help set a precedent.

"Raslan's conviction... gives the people a little hope that the journey of their struggle towards justice is continuing," she told Middle East Eye.

"I have hope in the strength of our struggle to hold accountable all the perpetrators of torture and detention by the Syrian regime, starting with those who gave orders and ending with those who carried them out."

Prosecutors in the trial said Raslan oversaw "electric shocks", beatings with "fists, wires and whips" and "sleep deprivation", as well as sexual abuse and rape.

UN High Commissioner for Human Rights Michelle Bachelet described the verdict for Raslan as "historic" and said it should "serve to spur forward all efforts to widen the net of accountability for all perpetrators of the unspeakable crimes that have characterised this brutal conflict."

'It's only the beginning'

The verdict comes less than a year after the conviction last February of another lower-ranking Syrian intelligence officer in the same trial.

Eyad al-Gharib was sentenced to four and a half years in prison over complicity in crimes against humanity in his home country.

He had been accused of involvement in the crackdown against anti-government demonstrators in 2011, rounding up protesters in the Syrian city of Douma and delivering them to a detention centre where they were subjected to torture.

Raslan and Gharib, both members of Syria's intelligence service, fled Syria after the war erupted and applied for asylum in Germany.

'It is an important conviction for us because it is the first trial of its kind targeting a security officer, and the security system is still in place, and it is the first step on the long road to justice'

But despite claiming to have defected from the government of President Bashar al-Assad, they were both arrested by German authorities under the principle of universal jurisdiction and went on trial in April 2020.

Both men were relatively open about their involvement in state repression when interviewed by asylum officials in Germany.

During his interview in 2018, Gharib admitted that he had helped round up protesters and people photographing protests in Damascus, who were transported to Branch 251.

"It's only the beginning," said Yasmen Almashan, a campaigner with the Caesar Families Association who lost five of her brothers to Syria's brutal civil war, speaking to MEE.

"It is an important conviction for us because it is the first trial of its kind targeting a security officer, and the security system is still in place, and it is the first step on the long road to justice."

Over 80 witnesses, including 12 defectors and many Syrian refugees in Europe, have taken to the stand to detail the abuses carried out during the early years of the Syrian uprising over the course of the trial.

Raslan and Gharib's cases were brought using the legal principle of universal jurisdiction, a mechanism allowing the prosecution of offences committed abroad.

Syrian refugees have also brought a number of similar cases in Germany, France and Sweden.

Almashan said that, although Raslan conviction was welcome, the elephant in the room was the ongoing situation in Syria and the continuing rule of the Assad government.

She said she was worried that the conviction would throw "sand in the eyes" of the international community and distract from the wider problem.

"Justice must be releasing the detainees and revealing the fate of the disappeared first and then realising the biggest dream - which is to build a country based on democracy, justice and equality without any of the perpetrators of crimes in power," she said. UK attacks
Drone wars: MoD accused of 'targeted killings' after the death of IS arms dealer