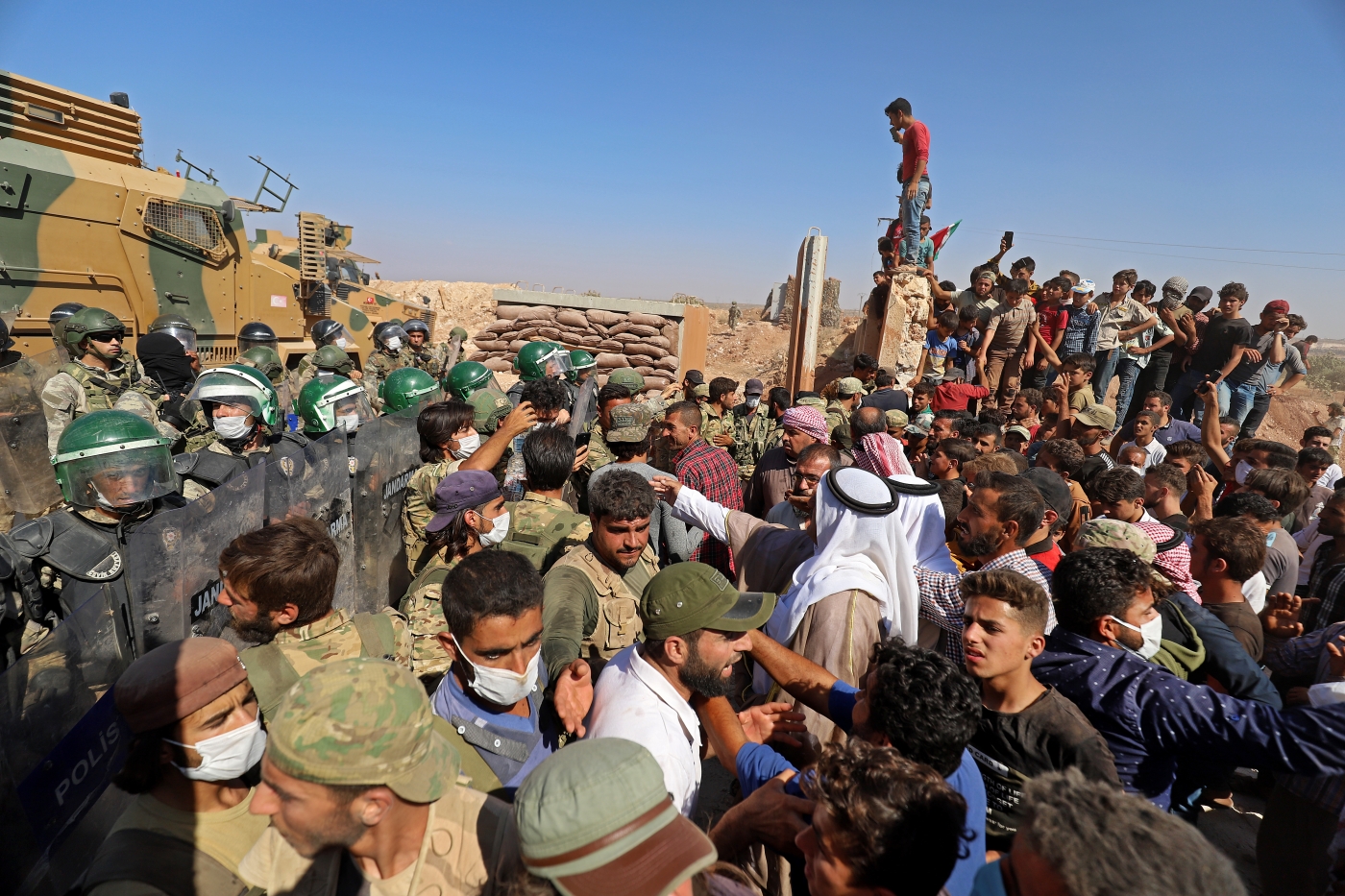 Syrian demonstrators in front of the Turkish checkpoint at the al-Mastumah base, in northwestern Syria, protesting the fall of several cities into Syrian governmental control, (AFP)
By
Khaled Al-Khatib
in
Idlib

As tensions continue between the Syrian government and Turkish forces based in northern Syria, locals have increasingly been pushed into demonstrations by each side against the presence of the other.

Since the failure of meetings between Turkey and the Syrian government's close ally Russia that took place in Ankara on 16 September, government forces have increasingly been patrolling in areas close to territories held by the opposition in Idlib.

This has been coupled with ongoing air strikes targeting opposition-controlled sites in the province, the last held by Syria's dwindling rebel factions.

At the same time - at the behest of the Syrian government - demonstrators gathered outside a number of the Turkish monitoring posts scattered around the Idlib region. The monitoring posts were established after an agreement with Iran and Russia in 2018 aimed at monitoring an ill-fated ceasefire agreement.

The aim of the protests has been to push Turkey to withdraw from its monitoring posts from areas under the control of the government in the Idlib region - echoing the demands raised during the Turkey-Russia talks.

As talks were under way in Ankara on 16 September, the Turkish monitoring posts in the cities of Morek, north of Hama, and Sarman, northeast of Idlib, were surrounded by protesters demanding their departure from the region. 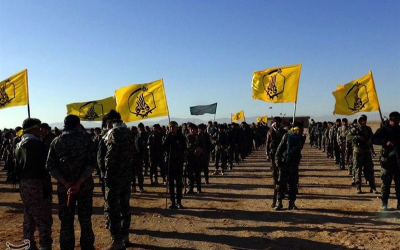 Turkish forces quickly intervened to disperse the crowd - soldiers fired tear gas canisters after a number of protesters tried to climb the walls of the garrison of the military base.

Activists on social media circulated an audio message suggesting that the demonstrations were organised by the ruling Baath Party.

The leaked audio revealed party leaders demanding the mobilisation of families, students and teachers of all ages, in addition to employees and paramilitary personnel linked to the Assad government. The instructions emphasised that the protesters should dress entirely in civilian clothing rather than military fatigues.

"In the three demonstrations, members of the regime forces and Iranian-backed militias wore civilian clothes, and we noticed their presence more in the demonstration that went out in front of the Turkish base in Anadan - they are from the Iranian-backed Baqer Brigade," Abdul-Fattah al-Hussein, a media activist in opposition areas in northwestern Syria, told Middle East Eye.

"The protests against the Turkish presence in the regime-held areas were prepared days before their start, and on the specified day, the Baath party branches in Aleppo and Hama allocated a number of buses to transport the demonstrators to the gathering place in front of the Turkish bases."

He said that while there were large numbers of civilians brought in, many were public employees who risked losing their jobs if they refused to attend.

Analysts have suggested the main aim of the protests is to create an image of popular support for the withdrawal of Turkey from government-controlled areas, as well south of the  strategic M4 road, which extends from eastern to western Syria through the north of the country.

For the government, opening up the M4 - some 30-35 km deep into Syrian territory - has become increasingly urgent in light of the escalating economic crisis in Syria, especially the scarcity of fuel.

"The protests organised by the regime against the Turkish presence cannot be separated from the Russian military and political moves pressuring the Turkish position," said journalist Hussein Nasser.

"We have seen how these demonstrations were prepared before the Turkey-Russia talks began in Ankara, so the Assad regime was aware in advance of the demands that Moscow was preparing to put forward during the talks - most likely it was aimed at embarrassing Turkey and pushing it to respond to the demands."

He said that Turkey may meet some of the demands, while the Russian federation was trying to end the escalation and restore calm in Idlib.

He suggested Turkey might withdraw its posts from the area extending from Morek to Saraqib, without responding to the demand to withdraw forces from the southern M4.

"In any case, [we may see] the withdrawal of the Turkish military bases in the regime-held areas to locations on the lines of contact with the regime forces in Idlib," he added, noting that new talks between Russia and Turkey may start soon through the defence ministries.

"This is in the event that the military escalation continues and the demonstrations against the Turkish presence in the regime-held areas recur."

Some in the Syrian opposition believe, however, that the government-organised protests will have little effect because they were not spontaneous and do not express the opinion of the street there.

Abdulwahab Assi, a researcher at the Jusoor For Studies Centre in Istanbul, said the protests lacked transparency in terms of mobilisation in the absence of the local population who were originally displaced.

"On the other hand the demands are consistent with the rhetoric and conditions of the Syrian regime and its allies, so that it seems difficult to distinguish the identity of the protesters, whether they are civilians, military, security personnel, or party employees," he explained.

He added that this type of protest generally had no effect on Turkey.

On 18 September, a counter-demonstration welcoming the Turkish army in the areas controlled by the Syrian opposition in Idlib was called by Syrian rebel factions.

The protests were organised under the banner "the Turks are a guarantor and Assad is a traitor" and stemmed from fears that any Turkish withdrawal could be seen as a green light for Assad's forces to push forward into opposition-held areas. 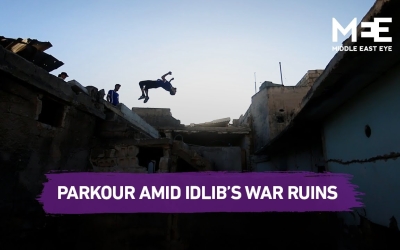 Journalist Mohamad Rashid, who works for the opposition's Hama Media office, said the protests could be considered a natural and spontaneous reaction to the pro-government protests, as people attached great hopes to Turkey's presence.

However, he said if Russian demands for the withdrawal of the main Turkish observation posts were fulfilled, at least, there could be discussion about the return of the displaced to the areas "under joint Russian-Turkish auspices".

The government-controlled areas of Idlib have been almost empty of residents since Assad's forces took control of them between May 2019 and February 2020. Russia will be able to claim that it will work to ensure the safe return of the displaced.

"We noticed that the Syrians here, especially those who have been displaced from their areas, constitute the majority of those who went out to welcome the demonstration. They are aware of seriousness of the situation," he said.

Despite protests on both sides, Syrians ultimately do not have an effective role in the course of military and political events, and are a card that the different parties use to apply pressure and achieve gains.

"The regime wants to convey the message that the [popular mindset] is the one that rejects the presence of the Turks," he said. 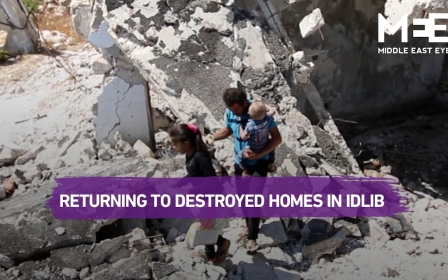 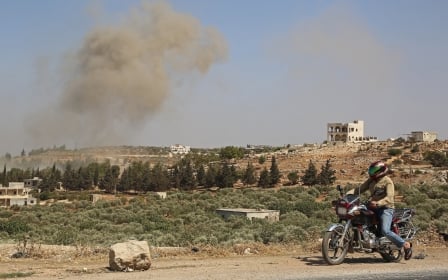