The Syrian who returned home from Turkey and lost everything

Heeding calls from Turkey's opposition to return home, Taha Taqtawi left for Idlib only to see his new wife and relatives die in an artillery strike Taha Taqtawi on his wedding day earlier this month, a week later his wife, sister and mother were dead (MEE)
By
Yusuf Selman Inanc
in
Istanbul

For the past three years, Turkey's main opposition party has been calling on Syrian refugees to return to their country, claiming that the civil-war ridden nation is now a place of relative safety.

After spending five years in Turkey, Taha Taqtawi heeded these calls in 2019 and moved back to Idlib, the last opposition enclave, which is under sporadic Syrian government and Russian aerial and artillery attacks.

Last week, Taqtawi lost his newly wed wife Maryam Barakat, his mother and his sister, all three of whom were killed by shelling. Taqtawi, who was also injured, is now in a coma, fighting for his life. 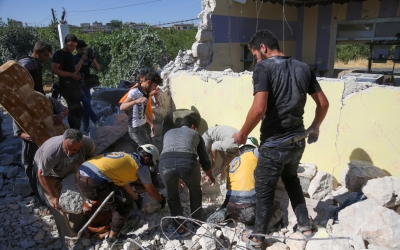 “His passion was to become a pharmacist,” his father Muhammad told MEE in a voice message.

There had been no opportunity to continue his education in Syria, but neither was there in Turkey, since he had to work to survive after entering the country in 2015, when he was only 18.

Taqtawi worked in any job that he could find, often in difficult conditions, without any insurance and with pay less than the minimum wage.

“He encountered many financial difficulties in Turkey. He had nothing to eat for the first two months, only bread,” Muhammad said.

“While he was working in a factory in Bursa, the payment was not regular, and sometimes held back by the owner.”

After four years, Taqtawi felt the idea of returning to his homeland, receiving an education, and serving his country, seemed a better option than having his labour exploited.

In 2019, he travelled back to his hometown, which had been declared as lying within a de-escalation zone, according to a 2018 agreement between Turkey and Russia.

“He attended the university. He was to become a medical analyst,” Muhammad said.

Barakat, Taqtawi's future wife, was so in love with her country that she had never thought of leaving. Instead, she began her graduate education at Idlib University and became a midwife.

“She was joyful, full of energy, in love with her job and a very good person,” her mother Fatima told MEE over the telephone from her hometown, Jabal al-Zawiya, in Idlib’s south.

'I’m very clear. They have taken refuge with us. They beg for safety. We cannot tell them to go back to where they were'

During her studies, Barakat worked at the Orient Hospital and after graduating earlier this year she worked voluntarily at Save a Soul Hospital. “What made her happy was to help others,” said Fatima.

Taqtawi and Barakat met at Idlib University. Such was their love for each other that they decided to marry and set up a new life in their homeland, despite the escalating tensions in the area.

On Saturday 10 July, they were married at home. Attendees at the wedding were just close family members, because any crowd could be targeted by government forces, Russia or any armed group.

Just one week after the wedding, the newly married couple were at home, preparing for the upcoming Eid al-Adha. It was a festival that they would not celebrate together.

At around 10.30pm, shelling, either Russian or from the government, hit their home, ending their union. Sixteen people were at the house, many there to congratulate the couple. Several were injured.

Taqtawi has been in a coma since the attack, treated at a hospital in Turkey’s Hatay province.

Taqtawi was among the 419,000 Syrians who have returned to their country from Turkey since December 2019.

He lost his wife, mother and sister at a time when Turkey's main opposition party has been saying more loudly than ever that “Syrians must go”.

In a video released last week, Kemal Kilicdaroglu, leader of the Republican People’s Party (CHP), warned the government that refugees were starting to pose a threat to national security. 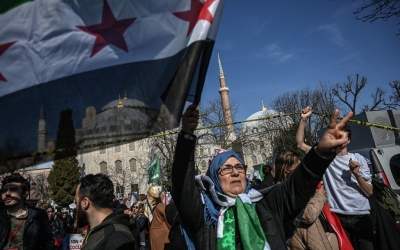 He promised that the CHP would send every Syrian back to their country if his party takes power in the country's next election, denying that such a move was racist.

In response, Turkish President Recep Tayyip Erdogan, leader of the ruling Justice and Development Party (AKP), said: “I’m very clear. They have taken refuge with us. They beg for safety. We cannot tell them to go back to where they were.”

Turkey currently hosts 3.8 million registered Syrians, in addition to 650,000 who were born there.

It is estimated that together with unregistered Syrians, the total number is close to five million. The country also hosts refugees from other nations, such as Iraq, Armenia and Afghanistan.

Kilicdaroglu has not outlined a roadmap for the return of the Syrians. MEE attempted to reach two senior CHP officials. One of them ignored the request, while the other one stated that he was not available for comment.

The promise to send Syrians back to their homeland has triggered much debate in the country. Social media platforms witnessed hashtags such as “time for you to go” and “this visit lasted too long,” referring to the “temporary protection status” granted to Syrians by the government.

Another popular hashtag was “stop the silent invasion,” mostly alleging that a demographic change was occurring in Turkey. The Sozcu newspaper, known for its anti-refugee stance, reported last year that the average number of children born to Syrian woman was 5.3, while the number among Turkish citizens is 1.76.

The opposition has also claimed that Erdogan has awarded tens of thousands of Syrians with Turkish citizenship in the expectation that they will vote for the AKP in return.

The anger and suspicion towards Syrians has manifested itself at a local level, too.

Lutfu Savas, the CHP mayor of Hatay, a Turkish city bordering Syria, claimed that in some districts Syrians would win local elections if they were eligible to become candidates and vote.

“The number of Syrians is three times more than Turks in Hatay. They will attempt to rule us once they take root here,” he said.

In a news conference on Monday, Tanju Ozcan, the CHP mayor of Bolu, a tiny city in the Marmara region, said: “We will charge Syrians ten times more for water and solid waste bills. We want them to go. I have no power to send them out of the city. Let’s send them away.”

Following his words, some refugees reported that they were verbally assaulted. But while Ozcan's comments found some support on social media, other CHP members were angered by the remarks.

In a Twitter post, the party's deputy Mehmet Bekaroglu said Ozcan’s statements were a violation of the constitution and were fuelling hatred.

Earlier this week, Arzu Sabanci, a member of the influential Sabanci family, which holds a major share of several sectors in Turkish industry, shared a post on her Instagram, saying: “I don’t want any refugee in my country. Stop the silent invasion. If they can travel for celebrating Eid, it means that they are safe there.”

Sabanci was referring to the fact that some Syrians were allowed to cross the border to spend Eid in their home country before returning to Turkey, although their numbers were put at only 21,500.

'Impossible to send them back'

Despite calls for their repatriation, international agreements and Turkey's own laws require full safety in their homeland before refugees can be returned permanently.

“Legally it is impossible to send them back since Syria is not safe at all,” Abdullah Resul Demir, head the Istanbul-based International Refugee Rights Association, told MEE.

“Russia, the regime, the PYD (the Syrian Kurdish Democratic Union Party), Daesh (Islamic State) and many other armed groups continue killing, kidnapping people. There is no infrastructure, educational facilities and most importantly no safety. The internal law and international agreements require that the territory must be totally safe and inhabitable.” In making their arguments, Kilicdaroglu and other opposition members have referred to Syrian President Bashar al-Assad’s statements that the war is over and that Syrian refugees should come back.

However, as the plight of Taqtawi and Barakat demonstrates, the shelling of civilians continues.

Local media has also reported that the government has been targeting Daraa, despite agreements. Residents of Raqqa have also said that they have been suffering from electricity and water shortages, as well as living in unrepaired houses.

“Assad’s call does not mean anything. An international agreement must guarantee people’s safety. Then, they can go back,” Demir said.

While the opposition has claimed that Syrians are causing unemployment among Turkish citizens, the government has defended the idea that they are contributing to the economy by taking up the “most difficult and dull” positions.

“Turkey needs a better integration policy, as these people are scapegoated for the economic deterioration,” said Demir. 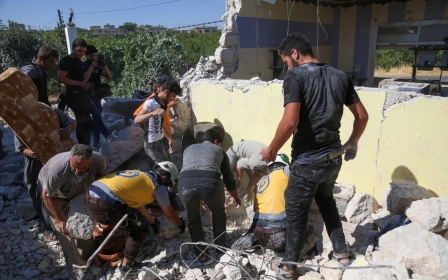