US sanctions on Syria have made it harder for the Arab League to normalise ties with Damascus, Emirati foreign minister says The 22-member Arab League, which suspended Syria in November 2011, has been working on re-establishing ties with the Damascus government
By
MEE and agencies

The United Arab Emirates said US sanctions on Syria are making it more difficult to normalise relations with Damascus and negotiate a return to the Arab League.

During a news conference on Tuesday, Emirati Foreign Minister Sheikh Abdullah bin Zayed said that while there were other obstacles facing the bloc's efforts to mend ties, the "bigger challenge today facing coordination and working with Syria is the Caesar Act".

The US Caesar Act, which took effect in June of last year, seeks to hold President Bashar al-Assad accountable for atrocities committed during the ten-year war and prevent government reconstruction efforts as well as the normalisation of trade.

"To keep the Caesar Act as it is today makes this path very difficult, not only for us as a nation, but also for the private sector," bin Zayed said, adding that the issue "should be part of a dialogue we address clearly with our friends in the United States".

Caesar Act sanctions have also garnered heavy criticism from aid groups that have complained that the measures have put a burden on ordinary citizens and impeded humanitarian efforts, as banks are hesitant to do business in the war-torn country despite aid waivers.

Passed by Congress with large bipartisan support, the act allows the US president to lift some measures if Damascus were to agree to enter meaningful negotiations and end violence against civilians. The Biden administration has said, however, that for now, it plans to strongly enforce the Caesar Act. The US has sought to stop the Syrian government from going forward with reconstruction efforts largely due to reports that it has been seizing private property and assets of Syrian refugees and internally displaced people, either without notice or by demanding exorbitant fees.

Syria's conflict, sparked by the brutal repression of anti-government protests in 2011, has killed an estimated 500,000 people and displaced millions.

Syria was suspended from the 22-member Arab League bloc in November 2011 as the death toll mounted.

The UAE and Bahrain re-opened their diplomatic missions in the Syrian capital in December 2018. 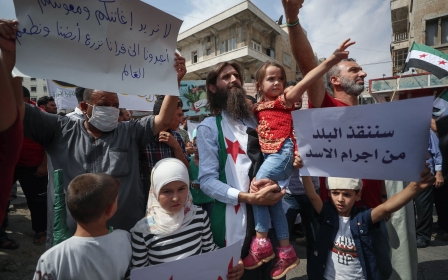 Syria War
'Wise diplomacy': How will Biden tackle US foreign policy towards Syria?