Complaint filed with Swedish police against Syrian authorities, including President Bashar al-Assad, over attacks in 2013 and 2017 Lawyers representing victims of suspected chemical weapons attacks in Syria have filed a criminal complaint in Sweden, which calls for a war crimes probe to be opened into alleged actions taken by high-ranking Syrian government officials.

The criminal complaint was filed with the Swedish police's specialised war crimes unit on Monday, a day before the 193 member states of the Hague-based Organisation for the Prohibition of Chemical Weapons (OPCW) are set to meet.

Last week, the watchdog issued a report confirming that the Syrian air force in 2018 dropped chlorine on a residential neighbourhood in Idlib.

Monday's complaint alleges that the Syrian government used sarin gas in two attacks that took place in 2013 and 2017, killing hundreds, including children.

While Syrian President Bashar al-Assad's government denies the use of chemical weapons, UN war crimes investigators have documented dozens of instances in which Syrian forces have used chlorine and sarin gas.

In Sweden, police have the authority to investigate war crimes regardless of where they were committed.

"[We] call on Swedish judicial authorities to open an investigation into these attacks, so that Syrian officials responsible for these war crimes can be put on trial under the principle of universal jurisdiction," the groups said in a joint statement.

The organisations have previously filed similar complaints in France and Germany.

Today in Sweden, on the eve of the OPCW States Parties Conference, Syrian survivors and civil society NGOs filed a criminal complaint against high-ranking officials in the Syrian government
Read the press release via this linkhttps://t.co/Y7PrF5Pw2j pic.twitter.com/5GhenduT8E

— Syrian Center for Media and Freedom of Expression (@SyrianCenter) April 19, 2021

Aida Samani, legal adviser at Civil Rights Defenders, accused the Syrian government of "strategically" using chemical weapons "as a tool to wear out the civilian population living in opposition-controlled areas and to suppress any resistance against the regime".

"It is unacceptable that those responsible for these heinous attacks are enjoying absolute impunity," Samani continued.

For his part, Steve Kostas, a lawyer at the Justice Initiative, said the Syrian government had used chemical weapons against populations "more than 300 times". 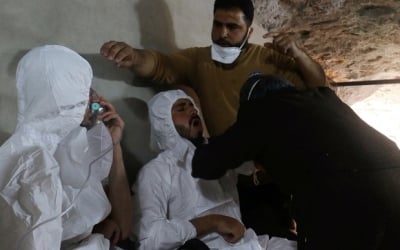 "Swedish authorities can join their counterparts in France and Germany to jointly investigate the use of chemical weapons in Syria and demonstrate that there will be no impunity for the perpetrators of these crimes," Kostas said.

Meanwhile, Hadi al-Khatib, founder and director of Syrian Archive, said the filing was one way "to support the victims’ and survivors’ struggle for truth and justice".

"We hope that a Swedish investigation into these crimes will eventually result in trials and convictions of those who ordered and carried out the attacks," Khatib said.

"Sweden can and should contribute to putting an end to the current state of impunity in Syria".

The war in Syria, now in its tenth year, has devastated much of the country. An estimated half a million people have been killed and millions have been forced to live as refugees.

The impoverished country is set to hold a presidential election on 26 May, the country's second in the shadow of the conflict, and will likely keep Assad in power.