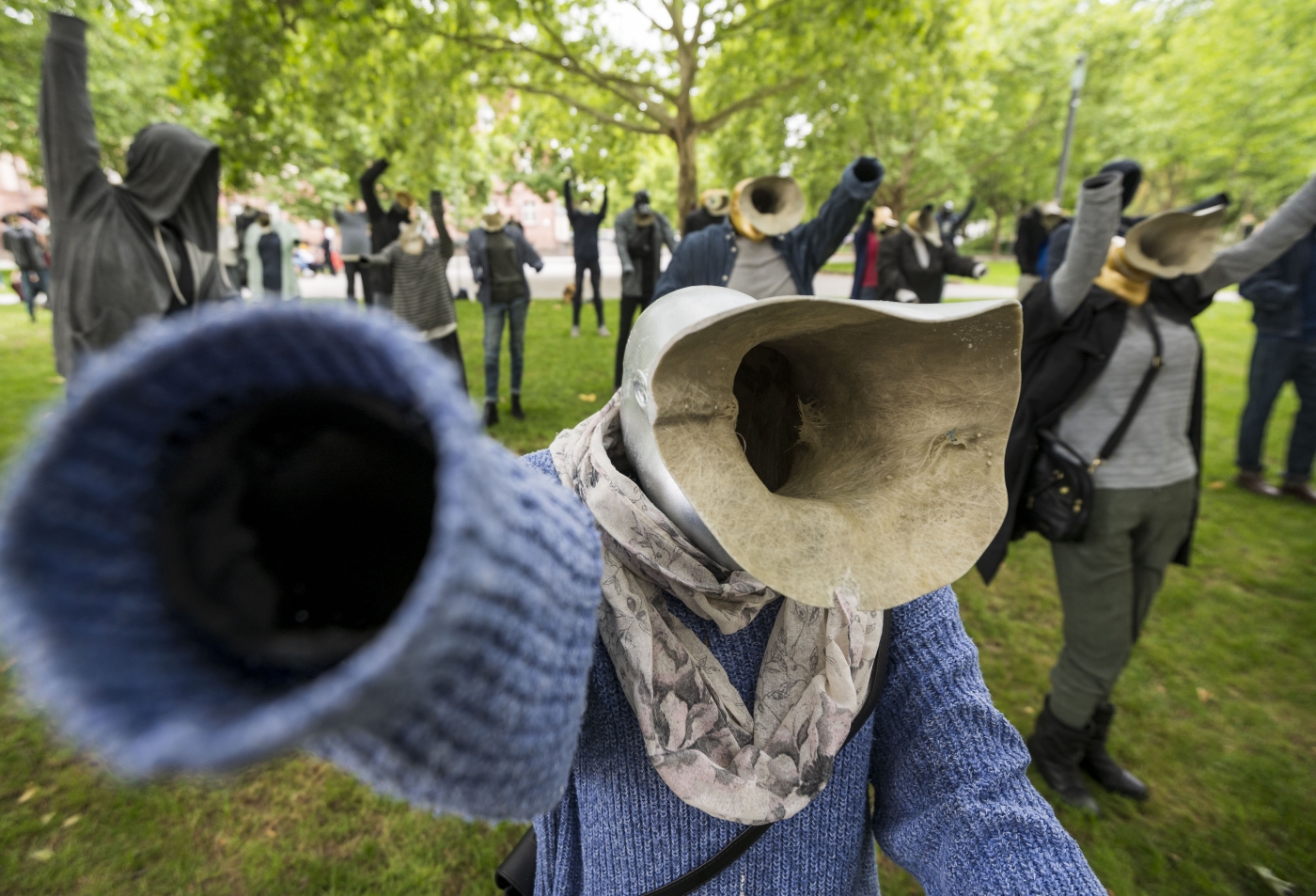 'The Muted Demonstration', an installation by Syrian artist Khaled Barakeh, which consists of structures dressed in clothes that belong to Syrian activists, on sidelines of Koblenz trial on state-sponsored torture in Syria (AFP)
By
Alex MacDonald

The unveiling of "physical evidence" of killings inside a prison controlled by an infamous Syrian intelligence agency has been hailed by lawyers, as the trial of two former intelligence officers continues in Germany.

Speaking in court on Wednesday, a day after the resumption of the trial of Anwar Raslan and Eyad al-Gharib in the German city of Koblenz, the Syrian Centre for Media and Freedom of Expression (SCM) cited documents acquired from the Branch 251 intelligence unit that showed the transfer of dead bodies from the unit to military hospitals.

Officials in Branch 251 - also known as al-Khatib - are accused of taking part in the imprisonment, torture and killing of numerous activists and political campaigners during the anti-government uprising in Syria in 2011 and ongoing war raging in the country for nearly a decade.

Almoutassim al-Kilani, a lawyer with SCM, told Middle East Eye that one document acquired from Branch 251 - of which Raslan is alleged by prosecutors to have been chief - presented a communication between two officials discussing complaints by soldiers linked to the unit about being requested to help move corpses from Branch 251 to the Harasta military hospital.

Part of the complaint stems from the sheer number of bodies needing to be transferred. Kilani said the evidence also included two pages of the register of the deceased at the branch.

“This is the first we have evidence about the killing inside Branch 251," said Kilani. "Not only testimony from the victims about the people who died, but we have physical evidence.”

He said SCM also provided the names of 93 officers and employees in Branch 251. Documents, many obtained from former employees of the branch, showed the chain of command that existed within the organisation.

'I could not eat for days afterwards'

Raslan and Gharib, both members of Syria's intelligence service, fled Syria after the war erupted and applied for asylum in Germany.

But despite claiming to have defected from the government of Bashar al-Assad, they were both arrested by German authorities under the principle of universal jurisdiction and went on trial in April.

Raslan is charged with crimes against humanity, rape, aggravated sexual assault and 58 murders.

As commanding officer of a prison controlled by Branch 251 intelligence unit, he allegedly oversaw the torture of at least 4,000 people between 29 April 2011 and 7 September 2012.

Gharib, who was a lower-ranking official, is accused of 30 counts of assistance to torture and murder.

Both men were relatively open about their involvement in state repression when interviewed by asylum officials in Germany. During his interview in 2018, Gharib admitted that he had helped round up protesters and people photographing protests in Damascus, who were transported to Branch 251.

Over the course of six months, former officials and victims have testified to abuses carried out during the early years of the Syrian uprising.

'Some employees would go inside and push the bodies out with their hands. Then an excavator would close up the ditch'

Last week, a Syrian government employee testified anonymously in the court about being recruited from the Damascus burial authority by security officers to work on the mass graves at Najha and al-Qutaifah, near the capital.

He said bodies came from Branch 251's prison as well as the Saydnaya military prison and the Harasta military hospital.

“A truck would arrive and the doors would be opened. Some employees would go inside and push the bodies out with their hands. Then an excavator would close up the ditch," he told the court. adding that while the number of the dead varied, one truck usually carried around 700 bodies.

He said he once almost broke down after he discovered a woman holding her child in her arms among the corpses.

“The smell was so strong that it stayed in my nose, even after we left. As soon as the doors opened, the smell spread out over a hundred metres," he said.

"There were streams of blood and maggots. The first time we went, I could not eat for days afterwards.”

The hope of many Syrians is that Raslan and Gharib's trial will serve as an indictment of the entire system of state violence and repression that occurred under both the current president Assad and his father Hafez al-Assad, who ruled between 1970 and 2000.

As part of his testimony, which took place over Tuesday and Wednesday, SCM's director Mazen Darwish said the investigation should widen the list of possible suspects, with culpability potentially reaching as high as Assad himself.

Darwish said the introduction of Legislative Decree 55 by the president shortly after the announced abolition of an almost 50-year state of emergency in April 2011 - which allowed detention of suspects without trial for up to 60 days and "allowed the intelligence practice detention away from any judicial oversight" - made Assad culpable in Branch 251's actions.

“For me, it’s not about these two men, it’s about the whole role of the security services made in Syria," said Kilani. 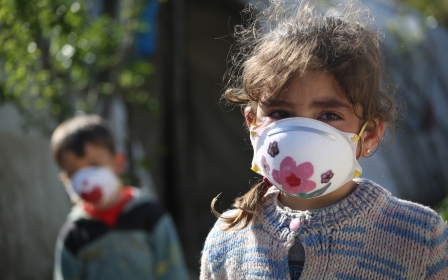 Syria War
In pictures: Syria's displaced suffer in the searing heat of the camps