The film centres around Sama al-Kateab, who was born during the Battle of Aleppo (Waad al-Kateab/Twitter)
By
Rayhan Uddin

After this weekend's Golden Globes ceremony in Hollywood, it was the British Academy of Film and Television Arts' (BAFTA) turn on Tuesday to reveal its film nominations for 2020.

It seemed like Groundhog Day as there was an air of inevitability surrounding most of it: a comic book-based superhero spin-off (Joker) led the way with 11 nominations, closely followed by an epic mafia tale from veteran director and serial award-winner Martin Scorsese (The Irishman); then a violent comedy-drama by another veteran director and serial award-winner, Quentin Tarantino (Once Upon A Time In Hollywood).

But among the predictable were four nominations for a low-budget Syrian war documentary, shot on a hand-held camera across five years of uprising in Aleppo.

For Sama tells the story of Waad al-Kateab, a 26-year-old Syrian filmmaker, as she falls in love and then gives birth to her daughter, Sama, all while documenting a revolution where death and destruction ravage her hometown of Aleppo.

During four years of fighting between President Bashar al-Assad's forces and rebels based in the northern city, an estimated 30,000 people were killed in the battle of Aleppo before the Syrian government retook control in December 2016.

Kataeb's documentary - which has already won the top documentary film prize at Cannes and four wins at the British Independent Film Awards - was nominated for BAFTAs in four categories: outstanding British film, film not in the English language, documentary, and outstanding debut.

Speaking to Middle East Eye in October, Kateab said she decided to frame the film around her daughter but the story it tells is a wider one. "It's all linked around Sama. Sama not just as my daughter, but as all of the children in Syria," she said.

Although fighting in Aleppo has ceased, the war in Syria continues. “The story that we lived three years ago is still happening now in a city called Idlib,” Kateab told MEE. “They live through the same circumstances that you see in the film.”

In the past three weeks, Idlib, the last rebel-held province in the country, has seen stepped-up military operations by Assad's Russian-backed forces which have displaced at least 235,000 civilians.

Despite For Sama’s multiple nominations, BAFTA has come under criticism for the lack of diversity reflected in this year's nominees. There were no non-white actors nominated for any main or supporting roles - even though Scarlett Johansson and Margot Robbie managed to get two nominations each.

For the seventh year in a row, there were also no women nominated in the best director category - or the "now traditional all-male director list", as one critic described it on Tuesday.

It appears that some trends remain regrettably inevitable.

The BAFTA awards ceremony will be held on 2 February at the Royal Albert Hall in London. 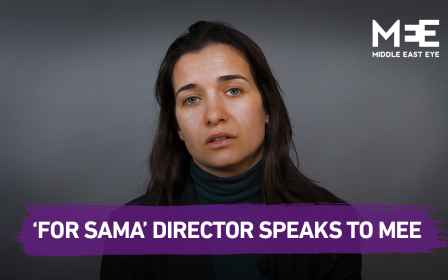 Syria War
Waad al-Kateab talks about her film ‘For Sama’