60,000 civilians have fled Maaret al-Numan over the past four days as the government presses on with its offensive against the last rebel-held enclave 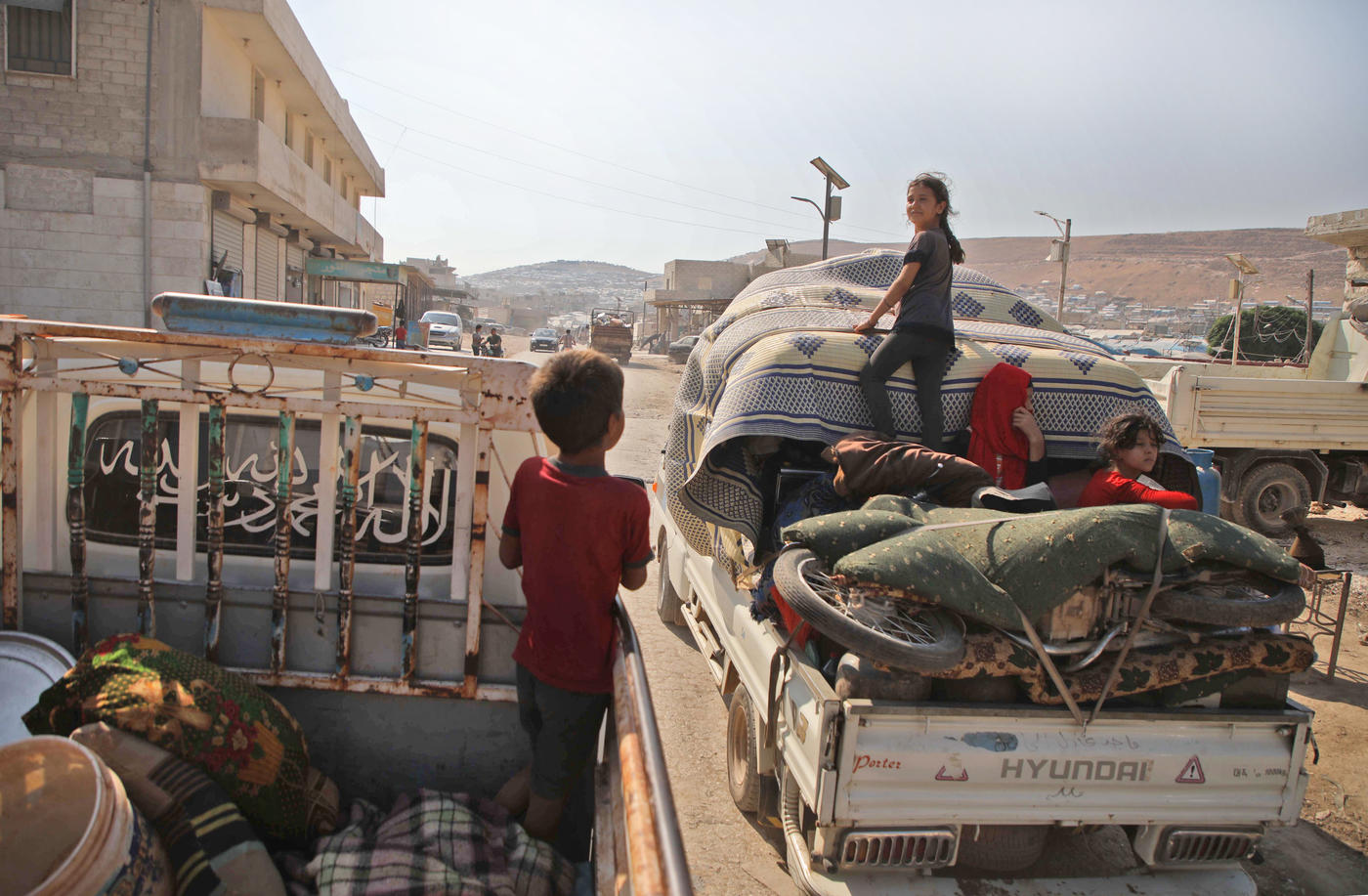 Four months of violence in Syria's northwest has killed at least 966 civilians, including 241 children, according to the Syrian Observatory for Human Rights (AFP)
By
Harun al-Aswad

An ongoing pro-government offensive in northwest Syria has forced tens of thousands to flee the last rebel-held enclave in the past few days, as fighting continues to paralyse the strategic M5 Damascus-Aleppo highway, activists said.

Pro-Assad forces also captured the key hilltop of Tal Tari on Wednesday after clashes that killed five government fighters and 12 rebels, according to the Syrian Observatory for Human Rights, a UK-based activist group.

A heavy round of government and Russian bombings have continued throughout Wednesday targeting towns and villages near the area where a Turkish military convoy came under government attack on Monday. The convoy is still stalled in the place where it came under attack.

The air strikes have focused on Maaret al-Numan and its southern and eastern countryside, especially the town of Jarjanaz.

“The aggressive air attacks are still ongoing and a hospital on the periphery of the town was hit,” Ibrahim al-Daghim, an activist living in Jarjanaz, told MEE. “There were seven vertical helicopters taking turns striking Jarjanaz last night."

Hussein al-Dughaim, former director of Jarjanaz local council, told MEE that the attacks have so far only resulted in material damage, including the destruction of three mosques, as 90 percent of the town’s civilians have fled.

The Syrian American Medical Society reports that 72,000 people were displaced between 1 August and 18 August, bringing the total displacement since the pro-government offensive began on 26 April to over 610,000 people.

Some three million people are trapped in Idlib and its environs, with around half already displaced from elsewhere in Syria. The UN has warned fighting in the area could result in a humanitarian catastrophe.

Four months of violence in Syria's northwest has killed at least 966 civilians, including 241 children, according to the Observatory. At least 14 civilians were killed in Idlib’s southern countryside over the past two days.

The government offensive has been complicated by a Turkish convoy sent into Idlib province on Monday which was forced to stop on the M5 highway running between Damascus and Aleppo.

Recent advances by the government have cut off the Turkish supply line leading into Ankara’s observation post located in Morek, the largest of a dozen military positions established by Turkey in northwestern Syria after an agreement reached with Russia last year.

Turkey says that the convoy was sent to keep the supply routes open and ensure the safety of the post. Idlib offensive: Stop the bombs or Syrians will ‘break the borders’
Read More »

Following the attack on the convoy, Turkish Foreign Minister Mevlut Cavusoglu said that Turkey would not remove the post and warned that the Syrian government "should not play with fire".

"We will do whatever is necessary to ensure the security of our soldiers and observation posts," he told reporters on Tuesday.

Later in the day, Turkey and Russia had a meeting and were set to negotiate the fate of Khan Sheikhoun and the Morek post, sources told MEE.

“I think the meeting has failed. It appears Russia is still clinging to the military solution in the northwest until it captures the M5 highway, the proof being the ongoing bombings,” Saoud Sayyah, a media activist living near the highway, told MEE.

The Turkish military has started building fortifications around the area where the stalled convoy is stationed on the outskirts of Khan Sheikhoun, local sources told MEE.

“The objective of the fortifications is to protect the convoy from the shrapnel of heavy bombardments that is targeting the surrounding villages and will soon be turned into a new Turkish observation post,” said Turki al-Sueid, an activist living in Kafranbel, a town south of Idlib.

However, some activists expressed doubt that a new post was in the works, saying they believe the convoy's priority is to continue supporting the supply line to Morek.