'They came to kill': Funeral held for Palestinian shot dead by settler

Friends and family mourn father-of-four Hamdi Talib Nasan, 38, who was shot in the back in the West Bank village of Al-Mughayyir 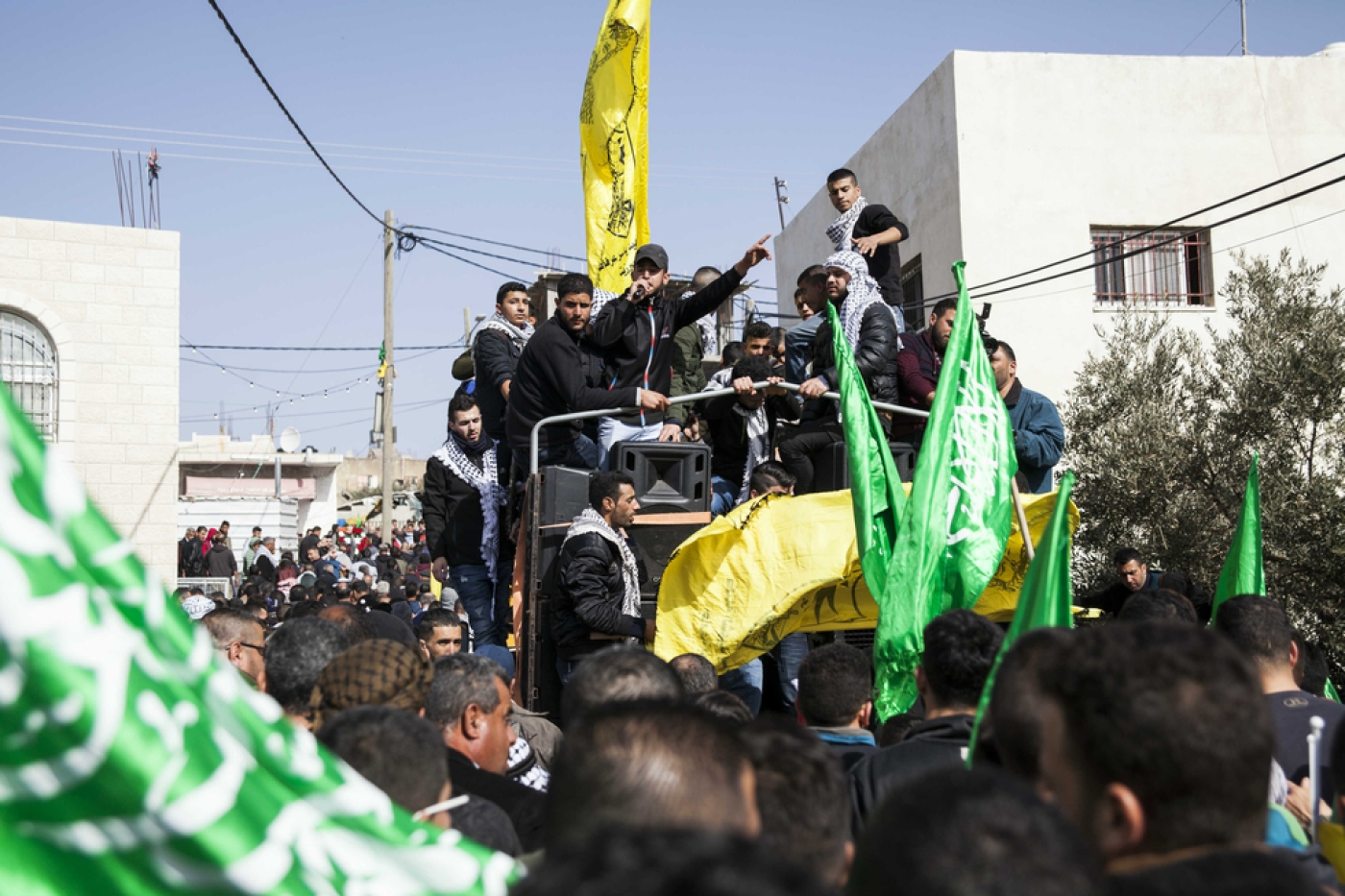 AL-MUGHAYYIR, Occupied West Bank - Men from the West Bank village of Al-Mughayyir filed into the Ramallah Hospital morgue on Sunday morning, with emotions shifting between anger and despair.

Family and friends mourned the death of Hamdi Talib Nasan, a father-of-four, who was shot in the back and killed by Israeli settlers the previous afternoon.

The settlers stormed the village, 30km northeast of Ramallah in the occupied West Bank, brandishing M16's and firing live rounds into houses.

Thirty-eight-year old Nasan had been carrying a man, wounded by two shots to the stomach, when he was killed.

On leaving the morgue, the funeral procession marched through the streets of Ramallah waving flags of Palestine and the ruling Fatah party, before making their way to Al-Mughayyir where Nasan would be laid to rest.

At the same time, Israeli forces had already erected a roadblock off Route 60 at the main turn off to the village.

Around 100 Palestinians had gathered on the road, prepared for possible clashes with Israeli soldiers.

Two 13-year-old boys had already been arrested before Nasan's body arrived in the village.

Palestinians gave thanks to God that the funeral procession was allowed to pass with ease, as a crowd of wailing women greeted Nasan's body in his home.

Swiftly, Nasan was then carried to the mosque through chants of praise as he died fighting for Palestine.

The men of the village spilled out of the overcrowded mosque and prayed for Nasan's soul before he was laid to rest in the nearby cemetery.

'They came to kill'

Settlers from the nearby outpost of Adei Ad, first attacked the outer houses of the village around 3pm on Saturday, Nasan's cousin Ataf Nasan told Middle East Eye.

Approximately 110 outposts are erected by settlers in the West Bank without authorisation from the Israeli government.

While Israel does not recognise the illegality of settlements under international law, their smaller versions, outposts, are illegal under Israeli law.

As settlers stormed the village, Palestinian residents came out and started throwing stones at the settlers, attempting to make them retreat.

"They started shooting live bullets from their M16's at the houses from far away, inside there are little kids," Ataf exclaimed to MEE.

"They came with the purpose to come and kill someone."

When news was released that Nasan had been killed, Israeli army officials began investigating whether a settler or soldier fired the shot.

The Israeli army spokesperson's unit stated settlers indeed fired shots but were still unsure if they were fatal.

Palestinian residents expressed certainty that it was a settler who killed their friend and family member.

Not only was Nasan killed, nine more were wounded, including two in a serious condition, according to Ramallah Hospital.

No protection from Israeli forces

The clashes between the settlers and Palestinians lasted for two hours inside Al-Mughayyir.

With the settlers firing live rounds, the Israeli soldiers allegedly did nothing to halt the violence.

"We thought from the moment the settlers started shooting live fire that the army would come [as] they were only two kilometres away," Ataf explained.

Only after Nasan was killed did the Israeli army arrive, shooting tear gas and rubber bullets at the Palestinians.

"They did nothing to protect us," Ataf said.

The Israeli army's Hebrew language Twitter account stated the "forces jumped to the point and responded by means of dispersing demonstrations" once they were aware of the clashes.

Amin Abu Alya, head of the Al Mughayyir council, said settler violence had increased in the village within the last two months, with no help from the Israeli police.

"Yesterday the Israeli police were at the scene and also the army, but they did nothing but take videos," Abu Alya told MEE.

Settlers and soldiers the same

"In general you see the settlers and the soldiers with their weapons walking next to each other," Ataf explained.

"They're basically the same, and the army always protects the settlers."

Marzook Abu Naen, a member of the Al-Mughayyir council, agrees with this, and firmly told MEE there is no difference between the settlers and the army.

"The army was on the main street, they saw what was happening and they didn't do anything," said Abu Naen.

"People called [the Israeli army] and they said it's not my business, then after they came they started shooting at us instead of arresting or doing something against the settlers."

Under international law, as the occupying power, Israel is required to protect Palestinians and their rights.

'We can't defend ourselves'

The village of Al-Mughayyir falls under Area C of the West Bank, completely under the control of the Israeli military.

With no police of their own, or anyone to defend them, Palestinians are left feeling helpless.

"We can't defend ourselves. They would shoot us with M16's," Abu Naen said, laughing off their lack of protection.

Abu Alya added that the only form of defence Palestinians have is to stay and resist on their land.

"We don't have options in front of us but to stand up and defend our land with non-violent protests," Abu Alya explained.

"Even though when we protest it puts a lot of people from the village in danger, but that's the only thing we can do."

The residents of Al-Mughayyir have been holding weekly Friday protests for the last seven weeks against the nearby settlers restricting access to their lands.

The Civil Administration - the military body representing Israel's policy in the occupied West Bank - promised the residents the nearby illegal outpost of Mevo Shiloh would be evacuated, though nothing has come of it.

Ataf explained the weekly protests aimed to urge the evacuation to go ahead.

On 25 January, the day before Nasan was killed, Israeli forces arrested nine people from the village.

No recourse for rising settler violence

According to Israeli NGO Peace Now, there are 413,400 settlers living in the West Bank.

At the beginning of 2018, the UN Office for the Coordination of Humanitarian Affairs highlighted that the frequency of settler attacks was on the rise.

Before the end of April, 27 incidents of Palestinian casualties were already reported – the highest monthly average since 2014.

By the end of 2018, 482 incidents of settler violence against Palestinians and their property had been reported, up from 140 in 2017.

If a Palestinian shoots a settler, as was the case in December, the offender is most often hunted down and killed by Israeli forces and collective punishment is enforced by blowing up the family home.

In contrast, investigations are rarely undertaken by Israeli authorities when a Palestinian is killed at the hands of an Israeli.

If investigations are opened, 85 percent of them end in no conviction of the settler.

For Nasan's family, there is little hope of justice. 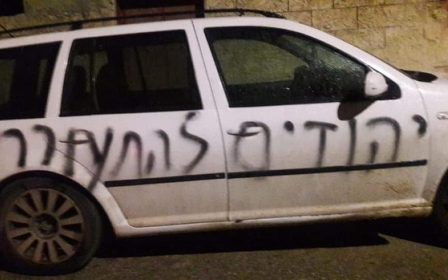 Occupation
Israeli minister calls for annexation of the West Bank