Thousands of supporters of the pro-Kurdish Peoples' Democratic Party (HDP) have attended a protest in Istanbul to show support for hunger strikes against the prison conditions of Abdullah Ocalan, the leader of the outlawed Kurdistan Workers' Party (PKK).

At least 250 prisoners across Turkey have launched hunger strikes in support of HDP politician Leyla Guven, who has been on hunger strike herself to pressure the Turkish government to allow Ocalan to hold regular meetings with his lawyers and family members.

Protesters gathered on Sunday at a square in Bakirkoy, on the European side of Istanbul, with police tightening security measures.

"I am saluting my friends resisting in prisons. They are our honour, they are not alone," Fahit Ulas, a supporter of the HDP.

"If needed we will sacrifice our bodies for this cause. We have no fear."

Ocalan, one of the founders of PKK, has been serving a life sentence on a prison island off Istanbul since his 1999 capture.

Guven, 55, was jailed in January 2018 for her criticism of Turkey's military operation against a Syrian Kurdish militia.

Last week, a Turkish court in the Kurdish majority city of Diyarbakir freed her under judicial supervision. Guven, who entered the 88th day of her hunger strike on Sunday, launched the protest on 8 November while in jail.

She told the AFP news agency in an interview on Wednesday that she would press on with the hunger strike at home.

Garo Paylan, an HDP MP who joined the Istanbul protest, said choosing a hunger strike was a "last remedy," hoping Guven's demand would be met as soon as possible.

"We want this demand to be fulfilled before any death," he told AFP.

Ocalan met his brother Mehmet for the first time in more than two years on 12 January. The details of that meeting have not yet been made public

In 2012, hundreds of Kurdish prisoners ended a 68-day hunger strike after Ocalan urged them to do so.

The HDP party remains under the scrutiny of Turkish authorities, which accuse it of links to the PKK.

Several of its MPs are behind bars, including former party leader Selahattin Demirtas. 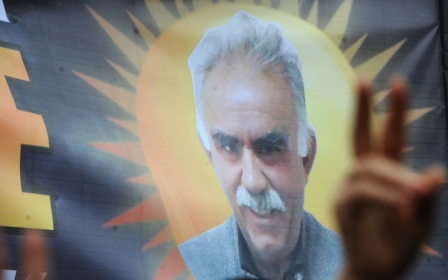