Iraq's battered Mosul weighs up the threat of US withdrawal

Reconstruction is slow and fears of an Islamic State resurgence are high, with tensions between Washington and Tehran fuelling fear 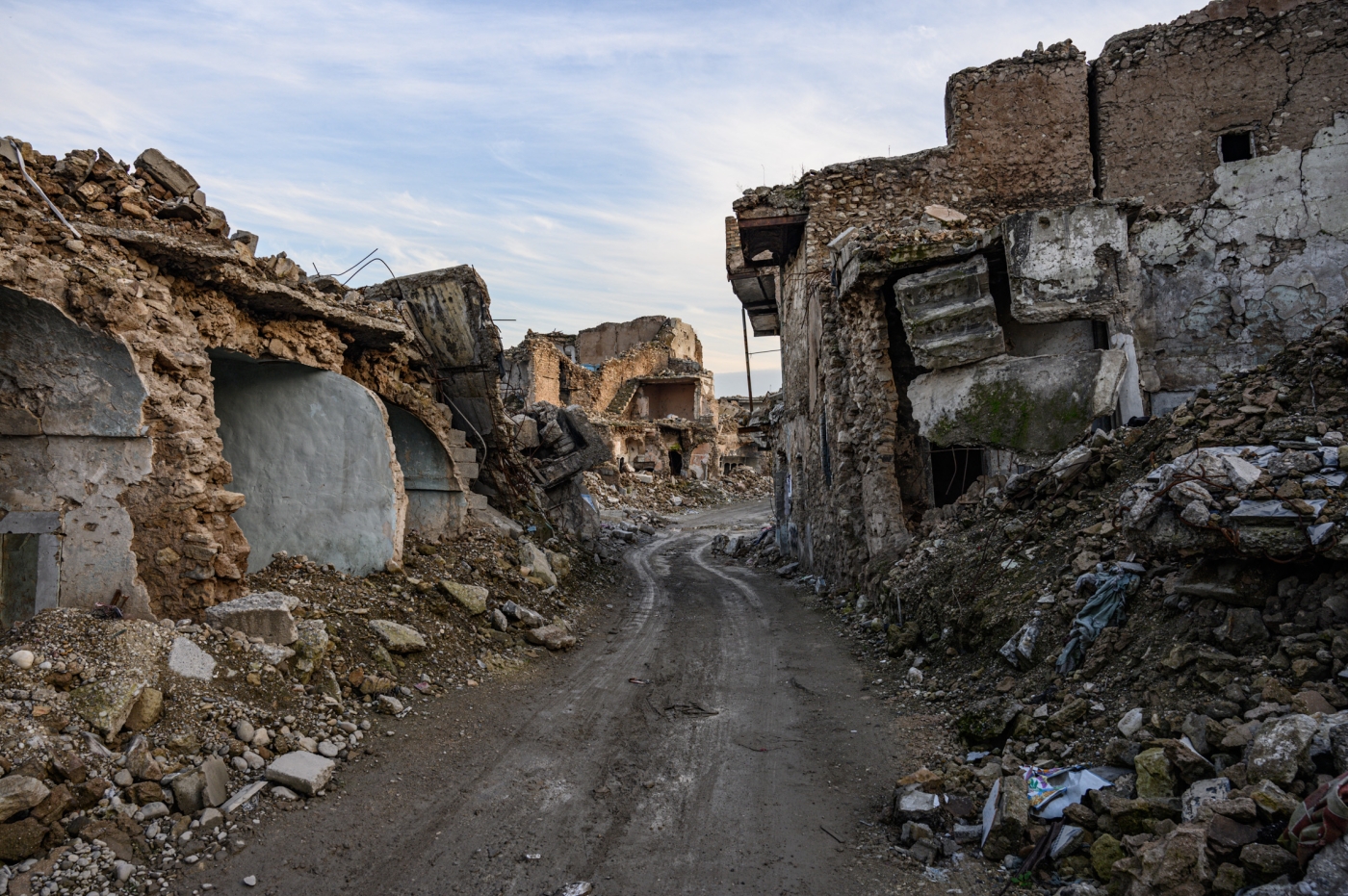 General view of a destroyed street in Old Mosul. Before the 2017 Battle for Mosul, these streets were at the heart of the bustling Old City (MEE/Finbar Anderson)
By
Federica Marsi
in
Mosul, Iraq

In the Islamic State (IS) group’s former Iraq stronghold, security is as precarious as its crumbling remains.

A concrete slab that might have once been a window frame now hangs from a gutted two-story house like a broken limb, the reinforcing steel laid bare as it bends outwards.

In the abandoned alleyways of Mosul’s Old City, which was violently seized back from the militant group in October 2017, each building harbours its own pile of rubble.

Muddy clothes, rusty gun magazines and what are most likely the bodies of dozens of IS fighters lie semi-buried in the jumble of earth and concrete. 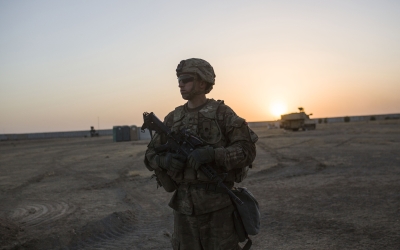 Few residents have had the financial means and the mental fortitude to move back to their shattered neighbourhoods. International aid has so far provided a lifeline to those who return, but political tensions between the United States, Iran and its Iraqi allies have raised fears of aid cutbacks and a renewed IS insurgence.

“Many of us are worried,” said Saib Abd el-Karim, a phone shop owner who had returned to his home in west Mosul after two years of displacement. Losing the support of the US would have dire repercussions, he said.

Some see the American presence as providing a lifeline of sorts for Mosul’s returnees. Those who moved back live off foreign-funded projects, a chunk of which comes from Washington.

Now, however, the US presence in Iraq is uncertain.

Though that vote was non-binding, on Friday tens of thousands marched in Baghdad calling for an end to the US troop presence, and momentum is building.

Abd el-Karim was able to relaunch his business thanks to the income from a cash-for-work scheme led by the United Nations Development Programme (UNDP), which provided 20,000 jobs to west Mosul returnees.

Workers are paid a generous $20 per day for activities including debris removal, mural painting and tree planting, for a maximum period of 60 working days.

“We need all the help we can get to rebuild this city,” Abd el-Karim said.

“Overall, the ongoing tensions between the US and Iran have not impacted the financing, prioritisation and implementation of UNDP’s stabilisation projects across Iraq,” Ali-Ahmad said.

Mosul residents, however, are wary.

In 2018, President Donald Trump abruptly ended US aid for the UN’s agency for Palestinian refugees, UNRWA. The wish to pressure the Palestinians leadership into making political concessions played a large part in cutting off that cash.

The US contributed about one-third of UNRWA’s 2017 budget, and the cutback has since left the organisation in disarray.

A USAID spokesperson said its "programmes in Iraq continue to operate, and USAID staff and implementing partners remain in the country”.

However, “security for all USAID programmes is under constant review".

The failure to deliver assistance to the residents of Mosul would risk leaving them exposed to the allure of radical groups like IS, which is weakened but not defeated.

“The fight against ISIL is more relevant than ever,” UNDP’s Ali-Ahmad said, using an alternative acronym for the group. “The current situation emphasises the need to continue and even upscale our stabilisation efforts.”

Fears of IS resurgence

The precariousness of this situation is palpable when crossing over the Tigris into west Mosul, where IS militants dug in for their final stand in the Old City.

Roundabouts are patrolled by heavily armed security forces, and armoured vehicles manned by the Iraqi counterterrorism service often speed among the rubble - a likely sign that a raid is about to take place.

Despite losing all its territory, IS still has fighters embedding in Mosul, and residents fear the militant group’s members are drifting back into the city.

One operation last week resulted in the arrest of senior IS figure Shifa al-Nima in a Mosul suburb. He was taken to a detention centre on a flatbed truck as he weighed 254kg and was unable to walk.

Any US troop withdrawal would make Mosul only more vulnerable to the return of militants.

Security forces, however, are not only deployed against IS. They are also present as aid is distributed, a testimony to the level of desperation reached by the residents of this battered city.

Outside the Mosul branch of the Barzani Charity Foundation (BCF), a security officer stood atop an armoured vehicle as men and women scrambled for boxes of food aid.

Others, unable to move past the registration table, claimed they had submitted all the required documents but had not yet received aid. They begged to be let through, lest another trip be in vain.

Yusra Abdallah, a 32-year-old mother of two, has struggled to make ends meet since her husband died fighting as Mosul fell to IS in 2014. As the widow of an army officer, she should be entitled to a state pension, which she has never received.

“I came here to register, I have no food at home,” she said. Her brother has so far helped her provide for the kids, but he was now struggling to find employment.

Rizgar Obed, BCF’s head of office in Nineveh province, said families were increasingly relocating to displacement camps where they can have access to free food and shelter. “We receive on average five to 10 families every day,” he said.

But long-term residence in camps risks exacerbating social stigma and isolation. Ultimately, he warned, this might end up breeding a new generation of disaffected Iraqis. 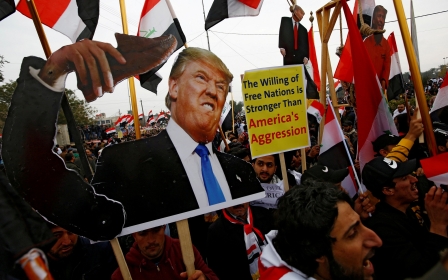 Inside Iraq
At what point do US troops in Iraq become an occupation force? 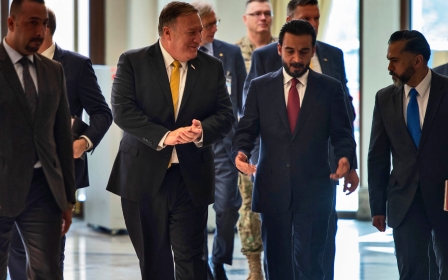 Inside Iraq
Ruling amid ruins: The plot to break up Iraq
David Hearst 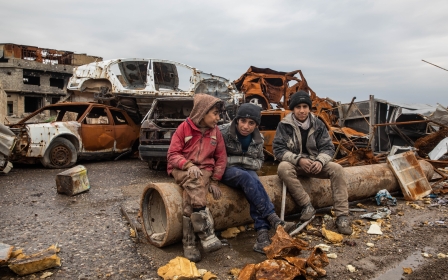 Inside Iraq
'We have no choice': A day in the life of Mosul's young scrap-metal merchants