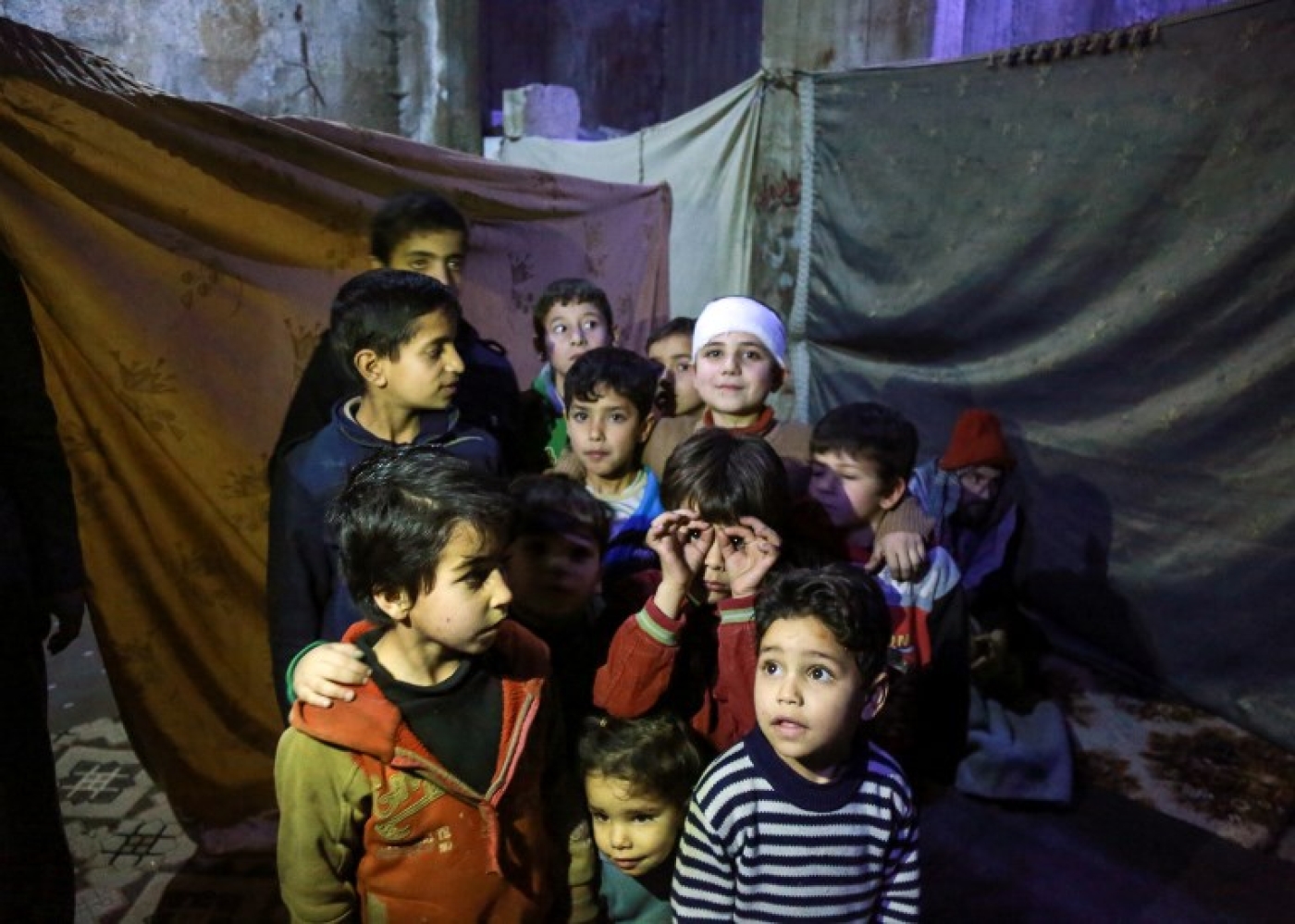 As thousands of families in Eastern Ghouta continue to hide in overcrowded underground cellars, women have taken the lead on providing support for children who have been holed up in dark shelters for weeks.

"We are trying to keep ourselves and our children alive. We cook what we have to feed them and keep them busy with classes and activities," said Layla Bakri, a former student of agricultural engineering in Douma.

The Syrian government's onslaught against Eastern Ghouta, which began on 18 February, has become one of the fiercest campaigns of a war now entering its eighth year, with bombardments killing more than 1,000 civilians, including at least 215 children, according to a monitor.

"We've been living underground for almost three weeks," said Bakri, who added that 70 percent of those living in the cellars are children, while the rest are mostly women or old men.

We've been living underground for nearly three weeks. Without these activities we'd all break down and that's exactly what the regime wants

"Women are at the forefront of this underground work. While many men are involved in rescue missions and others are on the front lines, it is we who have been trying to keep life going as the situation gets tougher by the day.

"Women have been responsible for ensuring that the children are fed, kept busy and feeling secure at a time where there is little to provide on any of those fronts."

Despite the challenges Syrians in Eastern Ghouta are facing to survive, life underground would have been unbearable for Bakri if she wasn't busy, she said.

"Without these activities we'd all break down and that's exactly what the regime wants."

Another aspect of women's efforts to keep life going underground is providing psychological support to thousands of children affected by the war.

"Those of us who are trained psychologists have been providing support sessions for children who've seen family members killed or wounded. So many are continuously breaking down in fits of screaming amid the sound of bombs and air strikes in the background," said Bayan Rayhan, a former geography student from Douma.

Like many other women, Rayhan became an activist, teaching at schools and helping emergency services after she was forced to leave her studies when government troops encircled Eastern Ghouta in 2013.

The United Nations estimates 400,000 people live without enough food, water or medicine in the besieged area. It remains the only large rebel enclave near Damascus, the seat of President Bashar al-Assad's power.

On one occasion, Rayhan and a group of other women collected donations to show support for their neighbours in Hasrata after a particularly intense bombing campaign on the town in the second week of February.

"Hasrata had been targeted by air strikes that led to a genocide," said Rayhan.

"We wanted to show our support for the families and try to provide hope for the children," said Rayhan, adding that the group of women crossed into the bordering town's underground shelters with supplies of food.

"When we arrived, it was a shocking sight; families were piled on top of one another.

"But it was beautiful to see big smiles on the children's faces when they realised we had come with food."

'Living in the Dark Ages'

While the cellars have provided thousands of families with shelter from the ongoing bombardment, the conditions underground are hardly human.

"It's like living in the Dark Ages, with no water, electricity or medicine. The cellars are more like deserted bunkers, unfit for humans to inhabit," Rayhan told MEE.

"Skin disease and chest infections are spreading like wildfire because of the overcrowding and the lack of medication and sanitary conditions," she added.

"It's more like living in a sewage pipe for weeks on end without access to fresh air or sunlight," said Bakri. "We haven't been able to take showers or clean ourselves so the smell is revolting."

It’s like living in the Dark Ages with no water, electricity nor medicine. The cellars are more like deserted bunkers unfit for humans to inhabit

"Those of us who already suffer from breathing problems are really struggling to survive," added Bakri.

"We haven't been receiving any aid, and our storage of food is depleting quickly. It's so hard when my daughter asks me for food and I have nothing to give her," Bakri told MEE.

According to Hassan, a resident of Douma, many families have been starving in the cellars.

"People are going for 48 hours with no food. Without food stores of their own and none coming from aid organisations children are starving."

UN aid agencies have pleaded with the Syrian government and its ally Russia to halt the campaign and allow aid trucks to enter after a convoy on Monday was unable to complete its delivery because of the fighting.

The first emergency aid convoy to cross the front lines into Eastern Ghouta since the recent government onslaught arrived on Friday, but many civilians are still living in despair.

Syrian government forces have taken farmland and marched into towns, squeezing the pocket in the eastern suburbs of Damascus.

As the battles have crept closer, thousands of families fled their homes and moved deeper into the enclave, residents say. The cellars were already packed before that.

On 26 February, Russia, which backs the Syrian government, offered rebels safe passage out while ordering a daily "humanitarian pause" within the enclave and saying it was also guaranteeing civilians safe passage if they wanted to flee.

But civilians in Eastern Ghouta have continued to shun Russia's offer to leave, as rebels and Moscow blame each other for the humanitarian deadlock.

Whenever I am forced to go above ground for food or for some other essential task, I kiss my daughter goodbye, as it might be the last time I see her

"The air strikes have not stopped for a minute during this latest operation, even during the humanitarian pause," said Bakri. "We have no alternative but to remain underground."

According to Bakri, the only time she leaves the cellars is to stock up on food or to check on her home.

"Whenever I am forced to go above ground for food or for some other essential task, I kiss my daughter goodbye, as it might be the last time I see her."

Evacuations have taken place in other parts of Syria, where fighters and civilians have withdrawn to rebel territory near the Turkish border.

Such deals, in which the choice is usually to accept state rule or leave, have helped Assad's military claw back control of major cities, with support from Russia and Iran.

People in Eastern Ghouta say they dread a similar fate.