Too dangerous to play: The West Bank children shot dead by Israeli soldiers 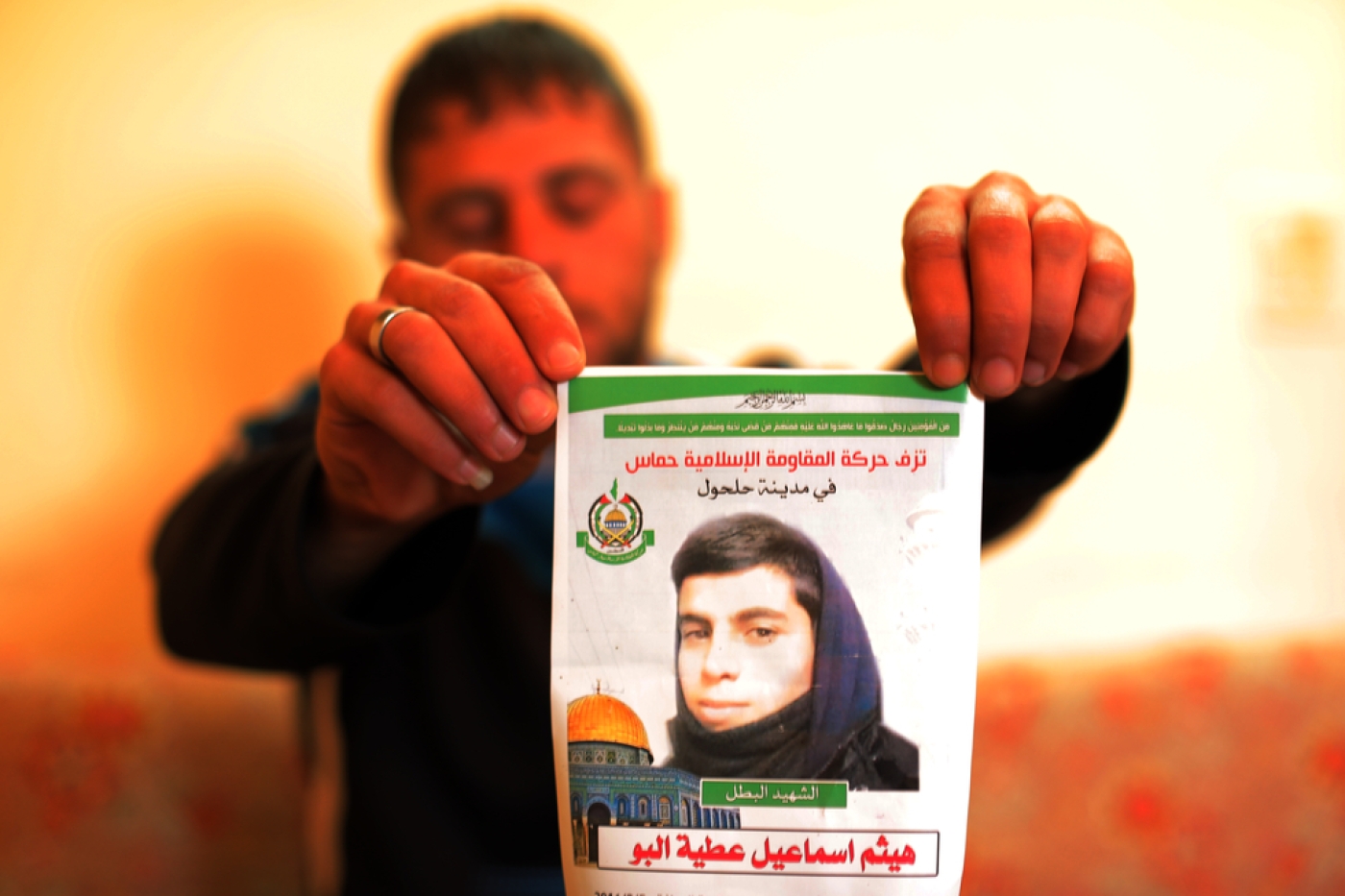 HALHUL, West Bank – Parents in the occupied West Bank say they can no longer allow their children to play outside because of fears that they could be shot dead by Israeli forces.

A report published this month by a children's rights group said that 41 children had been shot dead during six months of upheaval in which Israeli forces have often responded with lethal force to scores of stabbing and shooting attacks by Palestinians.

Nasreen al-Baw, the mother of 14-year-old Haitham al-Baw who was killed by Israeli soldiers on 5 February, told Middle East Eye that her son had died instantly after being shot in the back while playing on a hillside with his cousin and another teenager and his two new dogs.

Israel security forces said Haitham had been throwing stones at passing cars on the outskirts of Halhul village near Hebron, a statement Nasreen al-Baw denied.

“My son was the oldest of four, and our only son,” she said. “He was very responsible. He had a kind soul that fell for every animal he met, from the chickens to the donkeys and the dogs and cats in our neighbourhood. He didn’t have violence in him.”

According to the Defence of Children International-Palestine (DCIP), which compiled the report into child deaths, an autopsy showed that Haitham had been struck in the back by bullets which pierced his lungs and chest and exited through his mouth.

Haitham's cousin, 16-year-old Wajdi Saada, was tackled and arrested, while the other teenager ran away.

Nasreen al-Baw said she now only allowed her three younger children to leave the family home to go to school, or if they are accompanied by an adult.

“Here the children used to come and go as they pleased. They didn’t sit inside all day on computers, they go would go out and play with their friends after school, but that is not our reality anymore,” she said.

“It’s just too dangerous to let the children out of the house without us. We know now that anything can happen under occupation. A day in a field with a dog can mean death.”

Luaiy al-Baw, Haitham’s uncle, said he had frequently spoken to his nephew about the wave of unrest and warned him to be careful and to stay away from violence.

“I never got the feeling that he was too interested in what was going on though,” he told MEE, sitting in the family’s living room filled with photos and memorial posters of Haitham. “He was more interested in his pets and playing football.”

Five days after Haitham's death, 16-year-old Omar Jawabra was shot dead by Israeli forces when clashes broke out as they entered the nearby al-Arroub refugee camp.

According to the DCIP report, 40 children have been killed by Israeli forces in the West Bank in the past six months, while one child died from a gunshot wound when Israeli forces fired on protesters at the border of the Gaza Strip last October.

In addition, 2,177 children have been injured since October, according to UN figures.

About three-quarters of the children were shot dead during what Israeli security forces said were actual or attempted gun and knife attacks on Israelis, although rights groups have disputed the circumstances of many of the cases.

In an interview with DCIP, Wajdi Saada said that he and Haitham had not thrown stones or shown any intention of doing so.

He said an Israeli soldier had “jumped on me, punched me hard on my face, knocked me down to the ground, and ordered me to take off my shirt” during his arrest. “I did so while I was looking at Haitham.”

The DCIP, along with Amnesty International, has accused Israeli forces of implementing a "shoot-to-kill" policy, which in some incidents, it said, amounted to “extrajudicial killings”.

“There is mounting evidence that, as tensions have risen dramatically, in some cases Israeli forces appear to have ripped up the rulebook and resorted to extreme and unlawful measures," said Philip Luther, director of Amnesty's Middle East and North Africa programme, last year.

"They seem increasingly prone to using lethal force against anyone they perceive as posing a threat, without ensuring that the threat is real."

On 4 March, a video emerged of Israeli forces shooting a 12-year-old boy, later identified as Khalid Murad Shtewei, in the leg, which is considered a common tactic used by Israeli soldiers.

In the video the young boy claws at the ground, trying to pull himself away from advancing Israeli soldiers.

An older man ran back to help the boy and was also shot, but managed to get Khalid and himself to safety before they were taken to hospital.

Neighbours told MEE on Thursday that the 12-year-old boy was still being treated in hospital having undergone surgery.

In another incident, on 5 October last year around the time when the current unrest began, 13-year-old Abdelrahman Obeidallah, known to most as Abed, was killed as he gathered with friends after school outside the Aida refugee camp where he lived.

Israeli forces had first claimed that there were clashes in the area, but security camera photos showed that Abed was standing in a circle of friends with his backpack at his side when he was hit by a bullet.

An Israeli army spokesperson later said that Israeli forces were aiming for the legs of another youth and that Abed had been killed when the bullet ricocheted off the ground into his chest.

Asked to respond to allegations that the army was operating a shoot-to-kill policy, an Israeli army official told MEE that forces were ordered to "neutralise the threat to civilians," which he said did not mean killing an attacker.

"It's important to remember we are experiencing a great wave of terrorism from Palestinians coming from Judea and Samaria," he said, using the name by which Israel refers to the occupied West Bank.

"Terrorists of all ages, some of them small children, are committing these attacks."

He said that if Israeli forces saw someone trying to stab someone else, "they don't ask how old they are ... we don't ask for ID; we neutralise the attacker and once they are no longer a threat we deal with the situation."

Another army spokesman told MEE: "In the specific case involving the death of Haitham al-Baw, [Israeli] forces identified a number of Palestinians who were approaching the crossing and carrying molotov cocktails, ready to hurl them. Forces caught one of the suspects and shot toward another suspect, resulting in his death.

"The [army] regrets the use of minors in this wave of terror and the continued encouragement of young people to go out and execute terrorist attacks."

Back at the Baw family home, Haitham's young cousin Hamood said he was too emotional to speak about his relative, and said he was too worried about Israeli soldiers to venture far from home, even if his mother allowed it.

“Even if my mum let me, I wouldn’t leave the area around my house, because the soldiers can come at any time,” he said.

“I am not scared of them, but I know the soldiers don’t care that I’m just a kid and that means it is dangerous. I am not scared, but I am smart.”