Frightened tourists hid in their hotel rooms and barricaded themselves in, a pregnant woman went into labour Tunisian medics stand next to covered bodies in the resort town of Sousse, a popular tourist destination 140 kilometres (90 miles) south of the Tunisian capital, following a mass shooting on 26 June 2015 (AFP)
By
AFP

British holidaymakers told how they fled in panic from Friday's gun massacre on a Tunisian beach resort, screaming and running for cover when they realised they were under attack.

At least 30 Britons were among the 39 dead in the shootings in Port el Kantaoui outside the town of Sousse.

Survivors told how they were caught by bullets while others were in hysterics as their wounded partners were rushed to hospital.

Frightened tourists hid in their hotel rooms and barricaded themselves in, while a pregnant woman went into labour in the confusion.

British tourists caught up in the attack recounted their ordeal to British media.

One man said he was hit by a bullet.

The Briton, who was not named, appeared to be speaking from a hospital.

"Someone firing a gun, and then I looked at my wife and she got up and ran, and as I turned a bullet just hit me in my arm, and I just ran to the sea," he said, in footage on BBC television.

Shot in front of wife

Going to the lobby to find out what was happening, she saw a woman whose husband had "been shot in the stomach in front of her".

"She got dragged away by hotel reps trying to get her to safety but she was a complete mess. She was in hysterics.

"All she said was that he'd been shot and that he was there bleeding on the beach and he was just saying, 'I love you, I love you,' and then his eyes rolled back into his head."

Leathley said she believed the woman had been taken to hospital to see her injured husband.

"All of a sudden, from the level just below the lobby there was a huge sound of loads of machine gun fire and one of the reps just said 'run'.

"I was crying and we heard the machine gun fire and it was so loud and it seemed like it was just behind us, it seemed so close."

A group of eight people hid in a room with no windows "and just crouched and waited until they said it was OK," she said.

Back in the hotel, she said: "There was a pregnant woman earlier in the lobby who has now gone into labour."

Ellie Makin, from Ripon in northern England, was on the right-hand edge of her hotel's section of beach.

"All I saw was a gun and an umbrella being dropped," she told ITV television.

"Then he started firing to the right hand side of us. If he had fired to the left I don't know what would have happened, but we were very lucky."

She said she ran to her hotel.

"We just saw panic, everyone just got up and fled as soon as we realised it was gunfire.

"A guy ran up into the hotel and started shooting again and everyone fled. He was just below us, if we'd have walked down the stairs we'd have met him halfway.

"I ran to a room upstairs with somebody and their kids and we hid."

Product manager Gary Pine said he heard an estimated 20 to 30 shots before tourists ran to their hotels for cover.

"Only when you could start hearing bullets whizzing around your ear do you realise it was something a lot more serious than firecrackers," he told Sky News television.

"There was a mass exodus off the beach.

"You could see quite quickly the panic that was starting to ensue."

His son told him as they fled: "'I just saw someone get shot'.

"I'm now stood in reception with probably 200 other international guests. Do we leave? Do we stay? Where do we go? What do we do?"

She said there were "people crying and going hysterical".

Tomas O Riordain, a UK resident from Cork in Ireland, was in a neighbouring hotel.

"It was all over three or four minutes after it started," he told RTE radio, saying he had two daughters at the beach and "just had to wait and see if they came back".

It was the second time he had been caught up in a terror attack, as he was in Liverpool Street in London during the 7 July 2005 bombings almost a decade ago. 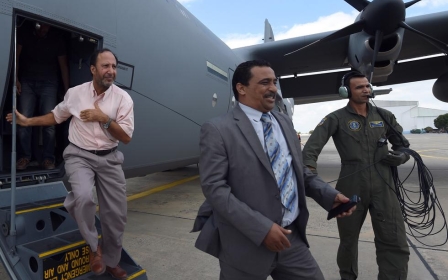