Law professor rose to power on an anti-corruption platform that inspired broad support, but with few concrete policy plans Before he was elected Tunisan president in 2019, Kais Saied's only previous political experience had been as a member of the assembly rewriting the constitution after the 2011 revolution.

Nearly two years later, he has frozen Tunisia's parliament, suspended the immunity of all MPs and dismissed his prime minister in moves described as a coup.

How did this law professor and political interloper rise to power?

Prior to his election, the 63-year-old was a constitutional law professor and jurist, and advised the government during the drafting of the 2014 constitution.

He ran in the presidential election as the ultimate outsider, without the backing of an established party or an apparent electoral machine, something that appealed across the political spectrum amongst Tunisians disillusioned with the country's paralysed political system.

While he focused on anti-corruption and integrity with a shoestring campaign that featured more door knocking than TV or radio ads, there were few concrete policy details.

He was nicknamed "Robocop" for his mechanical style of speaking in formal Arabic and appeared at first glance an unlikely figure to disrupt the political system.

But beneath his low-key, academic demeanour, he was advocating some genuinely disruptive ideas that had the potential to fundamentally remake the Tunisian state.

He proposed the elimination of Tunisia's legislative elections. Instead, he envisioned transforming Tunisia into a federation, incorporating aspects of direct democracy and empowering local councils to wield significant regional autonomy.

“It’s about completely changing the political configuration of Tunisia”, Youssef Cherif, head of the Columbia Global Center in Tunisia told Middle East Eye at the time.

“He is appealing to people who think we need a revolution in this country that radically changes the way things are done.”

Nidhal Mekki, who studied consitutional law under Saied and later worked as his research assistant, described Saied as a dreamer who would seek transformational changes as president

“Mr Saied has some reservations about representative democracy as it is practised and experienced in Tunisia,” Nidhal told MEE in 2019. “He is not against it categorically, but he would like to correct it by introducing a dose of direct democracy."

Saied was elected with over 70 percent of the vote in October 2019 and has been described as a populist with the public persona as a man of the people.

However, there have been few major policy changes to note during his time in office which has been plagued by the country's continuing economic crisis and the health emergency posed by Covid-19.

For more than a year, he has been locked in a political dispute with Prime Minister Hichem Mechichi.

In the past few months, some observers have warned that they believed Saied was preparing to eliminate his opponents and stengthen his presidential powers.

At the 65th anniversary of Tunisia's security forces in April, Saied gave a speech emphasising that he was the supreme commander of both the military and the country's internal security forces. 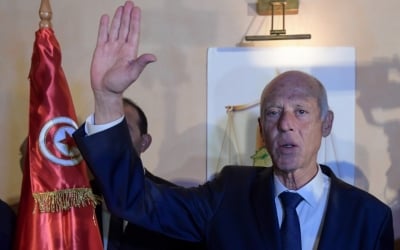 Until then, Tunisia's 2014 constitution had widely been interpreted as putting the internal security forces under the control of the prime minister.

"There is no distinction," Saied said as Mechichi and the speaker of the parliament and Ennahda party leader Rached Ghannouchi watched.

"The law, the world's texts and the code of contracts and obligations all mention it. The armed forces are the military and the security forces."

A month later, MEE revealed a letter written by Saied’s advisers urging him to seize control of the country using Article 80 of the constitution, which he now has, a move that has drawn both public support and condemnation.