A protester holds a placard that reads in Arabic ‘Release Yassine Ayari. No to the military trials of civilians', in Tunis, calling for the release of the MP jailed after a military trial, 11 September 2021 (Reuters)
By
MEE staff

A Tunisian appeals court on Wednesday turned down a demand by a lawyer and six MPs to halt their prosecution before a military court, in a case they denounced as politically motivated.

Meanwhile, authorities released lawyer Mehdi Zaghrouba, who has been in jail since 2 September in connection with a military investigation that also involved six opposition lawmakers affiliated with the Dignity Coalition, the fourth-largest bloc in the now-suspended Tunisian parliament.

"While we welcome the release of Zaghrouba, the decision to uphold military investigations for civilians has left a chance for the president to continue his reprisals against his political opponents," MP Seifeddine Makhlouf, head of the Dignity Coalition, told Middle East Eye in response to the ruling.

The seven men have been outspoken opponents of President Kais Saied's July power grab, in which he dismissed the prime minister, froze parliament, lifted the immunity of MPs from prosecution and assumed the position of the public prosecutor. They are all facing investigations over an altercation with police officials at Carthage airport on 15 March, when they reported an incident they described as an arbitrary travel ban against a Tunisian woman.

Though the travel ban was later lifted, the seven men have since been the subject of several investigations due to a lawsuit filed against them by police officers who claimed they were assaulted at the airport.

Hours after the power grab on 25 July, the investigations were abruptly transferred from civilian to military investigators, a move Makhlouf said was an act of retaliation by Saied due to the Dignity Coalition's consistent description of his move as a "coup".

Zaghrouba's prosecution has triggered solidarity protests by lawyers, who have threatened a general strike if his case is not withdrawn from the military court.

Makhlouf told MEE that a military investigation essentially meant that Saied would "have the upper hand" in determining its outcome, by virtue of his expanded powers after he sacked the defence minister in July.

Seven weeks after his controversial power grab, Saied has yet to address the fears of his critics. He has not named a new prime minister or declared his plan for governance. He has criticised parliament as an institution that represents a “threat to the state” and said he would amend the constitution.

Since 25 July, three MPs have been imprisoned in connection with free-speech offences, according to Human Rights Watch. At least 50 people have been placed under arbitrary house arrest, and dozens have faced travel bans, the organisation said, adding that at least 10 lawmakers have been subject to investigations since Saied’s announcement, four of whom are in custody.

Meanwhile, Saied is facing local and international calls to restore democratic rule. Last week, the G7 group of advanced economies urged him to appoint a new head of government and "return to a constitutional order".

Saied's planned power grab was first revealed by MEE in May, when a secret document was being circulated recommending the president invoke article 80 of the constitution and seize control of the country, citing emergency powers.

Saied did exactly that in July, saying that the coronavirus pandemic and the economic situation had become so dire that he needed to freeze parliament and dismiss the government, as well as launch an anti-corruption drive. 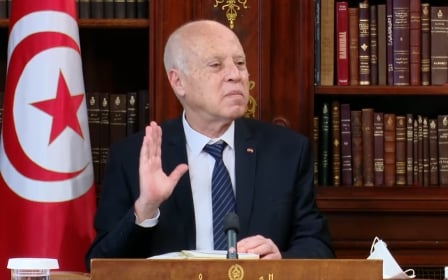 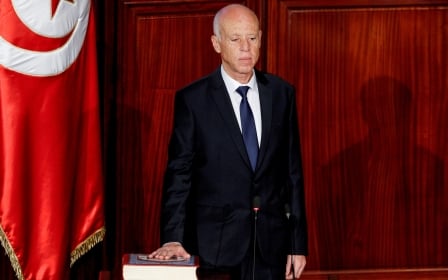