As Tunisia's Saied consolidates power, US remains without clear roadmap ahead

Experts and lawmakers say the Biden administration's approach to President Kais Saied's actions has been largely reactive, and a more strategic plan of action is needed 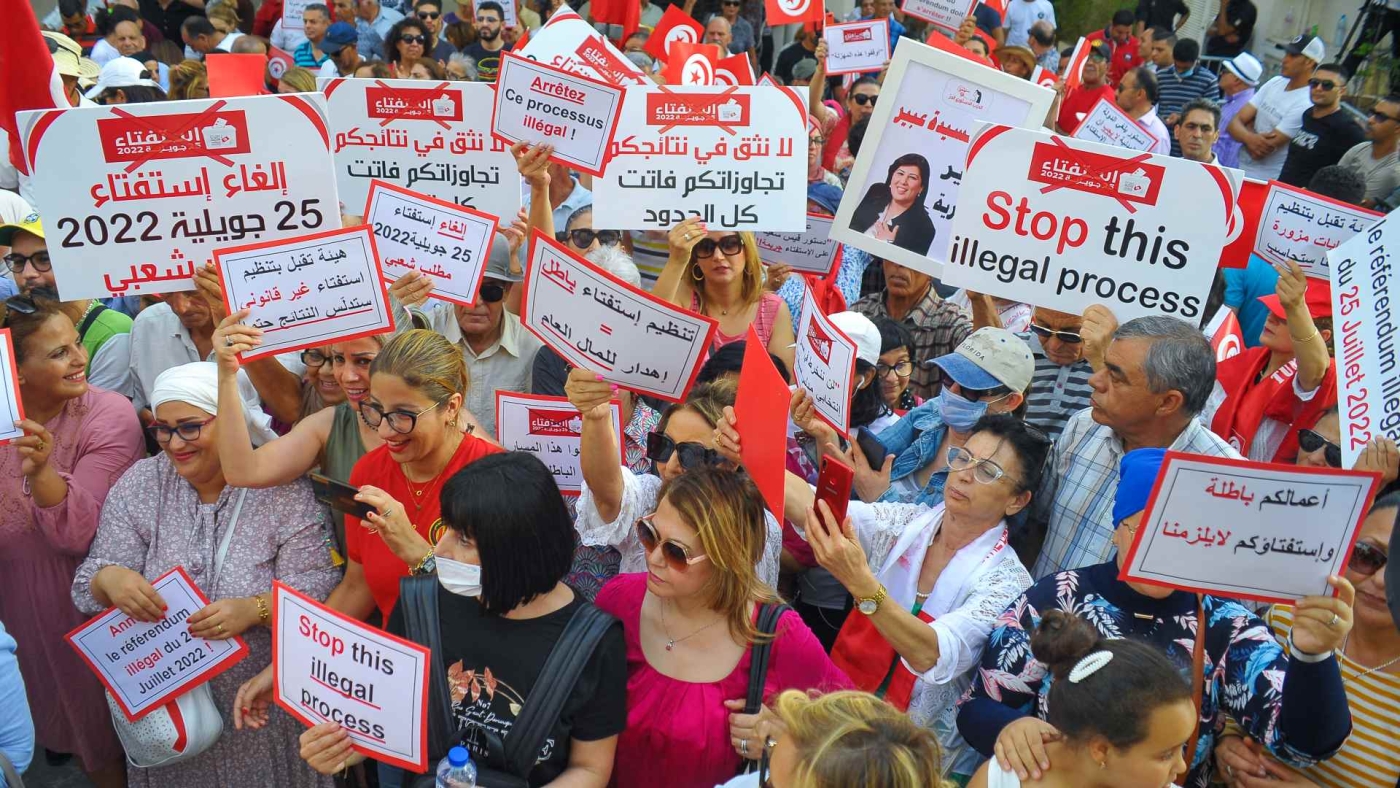 Supporters of the Free Destourian Party protest against the Tunisian president outside the Independent High Authority for Elections in the capital Tunis, on 7 July 2022 (AFP)
By
Umar A Farooq
in
Washington

After a referendum vote on Tunisia's new constitution this week that was plagued with a low turnout and opposition groups reporting difficulties in observing the process, the US State Department said it "shared concerns" over the vote and over the new constitution, which consolidates the government's powers under President Kais Saied.

"Tunisia has experienced an alarming erosion of democratic norms over the past year and reversed many of the Tunisian people's hard-won gains since 2011," Secretary of State Antony Blinken said in a statement on Thursday morning.

"The US-Tunisia partnership is strongest when there is a shared commitment to democracy and human rights."

The statement from the US's top diplomat was one of the strongest yet in opposition to Saied's actions since the Tunisian leader's July 2021 power grab.

But Washington's reaction to Saied's moves has largely been reactive rather than planned or strategic, experts on US-Tunisia policy told Middle East Eye. And the lack of pressure has only made it easier for Saied to continue to dismantle the progress made in the nation's nascent democracy.

"We've had multiple opportunities to realise that the statements from the podium or the calls are not working, and something else needs to happen. And I think that just hasn't happened," Sarah Yerkes, a senior fellow in Carnegie's Middle East Program and expert on Tunisia, told MEE.

"A lot of what the administration is doing, it's pretty reactive. They don't seem to have a clear plan," she said. "There does not seem to be a US roadmap of their approach towards Tunisia."

After Saied suspended the Tunisian parliament last summer in what many experts deemed a "constitutional coup," the US spoke with the president and issued a statement of the call, in which Secretary Blinken said Washington would "continue to monitor the situation and stay engaged".

Ambassador Gordon Gray, who served as the US ambassador to Tunisia from 2009 to 2012, noted that while the calls and interactions behind the scenes have likely been much harsher, the public statements have been more muted.

"The administration has been a bit reserved in its public comments on what's happening in Tunisia," Gray told MEE.

In 2011, the Jasmine Revolution in Tunisia saw the Tunisian people topple longtime autocrat Zine El Abidine Ben Ali and usher in a new push for democracy across the Middle East and North Africa.

The US celebrated the revolution as a success for democracy and has poured more than $1.4bn to support the country's economy and growing democracy, according to the State Department. The United States Agency for International Development has also sent nearly $685m to Tunisia since 2011.

The US and Tunisia also developed their military relationship over the past decade, as Tunis had been a partner in combating the Islamic State (IS) group. 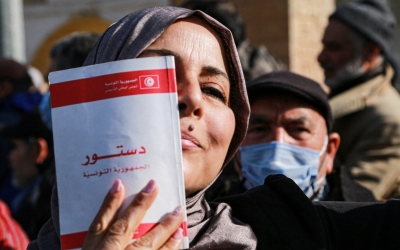 Whether or not aid and security assistance to Tunisia is an effective form of leverage against Saeid has been heavily debated in the US. Earlier this year, the Biden administration issued a government budget that would cut economic and military aid to Tunisia by 50 percent.

Still, Gray, who was the American diplomat to Tunisia at the time of the country's revolution and transition to democracy, said that given how little aid the US provides to Tunisia compared to other countries, cutting it off would not have done anything to prevent Saied's power grab.

"I'm not sure that the US assistance to Tunisia is so significant that it would have affected his calculus. If [national security adviser] Jake Sullivan had suggested 'reverse this' or we're going to cut off all US assistance, I don't think Saied would have changed his course of action," Gray said.

Yerkes agreed, noting that the US has attempted to exert more pressure on Tunisia than its European partners, which have more influence on the country.

"Europe spends way more money, has a way bigger trade portfolio, way bigger diaspora community than the United States. The United States is a minor player compared to Europe when it comes to Tunisia," said Yerkes.

Still, Yerkes said the US could still use its assistance as a form of leverage by pivoting to supporting Tunisian civil society that supports democracy and is in opposition to Saied.

"The United States should cut off every single dollar to the Tunisian government. At this point, Saied is the government," Yerkes said.

"I don't think there's really much at this point that's going to sway him. But that doesn't mean we shouldn't try."

Congress has managed to fill the gaps in pressuring Saied, as several lawmakers have served as the American vanguard calling for concrete action against the Tunisian leader and his government.

Since the referendum, several senators and members of Congress have issued statements rebuking the results and Saied, who they say is uprooting the hard-fought gains of the Tunisian people.

"When I travelled to Tunisia last year, I pressed President Saied on his plan for restoring representative democracy - a cause to which he claimed to be committed," Senator Chris Murphy said on Wednesday.

"Instead, he has taken every opportunity since then to unilaterally expand his authority, culminating in this new referendum: a vote to approve a constitution that embraces authoritarianism and threatens the freedoms Tunisians fought hard to secure." 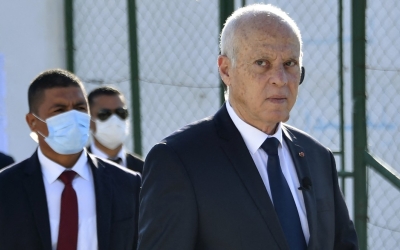 After the constitution, Kais Saied's next target: The unions
Read More »

A week before the vote, a bipartisan group of House representatives sent a letter to Blinken calling on the Biden administration to use all the "tools at your disposal" to stop Saied's actions - including diplomatic, economic, and political pressure.

"That's a frustration from Congress, too, is that there are tools that are out there that the administration is not using, and they're using them in such a reactive way that it's really just not effective," said Yerkes.

Several House members including Congressman Tom Malinowski, a leading voice in Tunisia in the House, also called to cut off all security assistance to Tunisia unless the country returns to a democratic path.

"We're not inherently trying to end the security partnership, but the entire 10 years of assistance has been predicated towards developing democracy in the country," a congressional source told MEE.

"Security assistance is one of the most tangible, hard effects of relationships."

Gray was opposed to such an approach, saying that, rather than influencing Saied, it would only serve to diminish the little leverage the US has.

"I anticipate what we're going to see is Congress is going to continue to reduce the amount of US assistance provided to Tunisia which becomes, in a way, a downward circle. It decreases whatever potential leverage we have," Gray said. 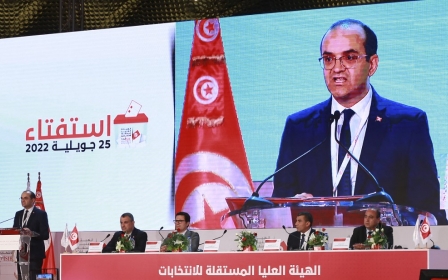 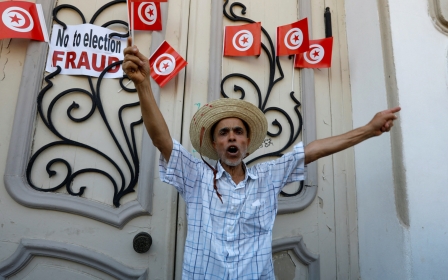 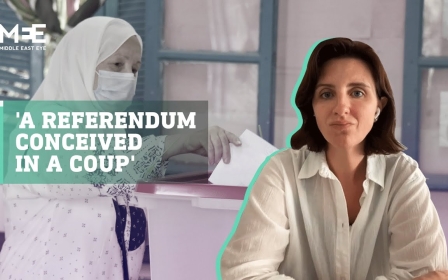 Opinion
‘A vote in an authoritarian context’: Monica Marks on Tunisia's referendum