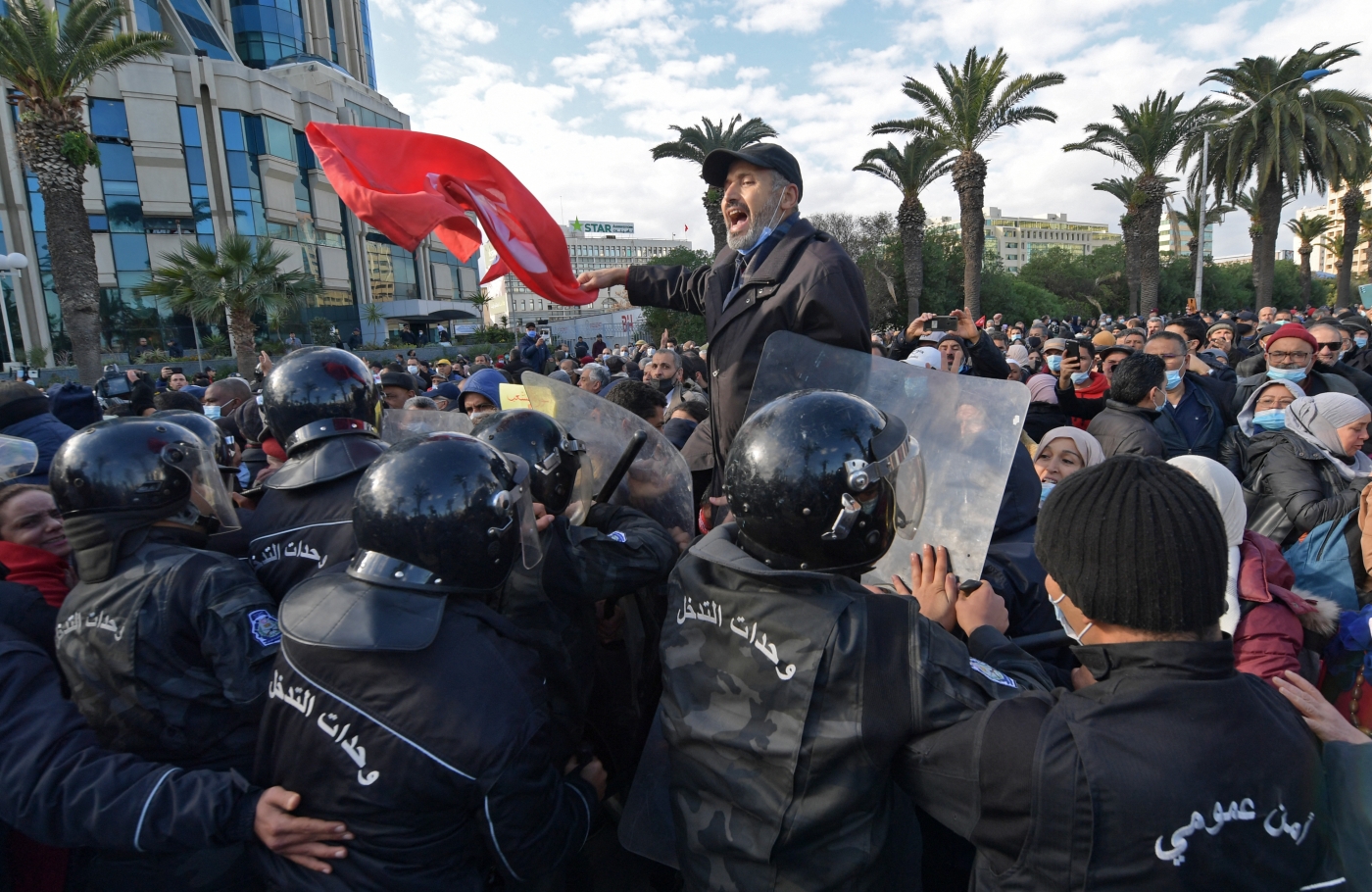 A man waves Tunisia's national flag during protests in Tunis against President Kais Saied on the 11th anniversary of the revolution, 14 January 2022 (AFP)
By
Ghufrane Mounir

A Tunisian man on Wednesday succumbed to wounds he sustained last week during a violent crackdown on protesters by security forces, in the first death resulting from demonstrations against President Kais Saied's power grab.

The Citizens Against the Coup campaign announced on Facebook that Rhida Bouziane, 57, was critically wounded on 14 January, and has died as a result of the "excessive violence inflicted on the demonstrator".

Samir Dilou, the former leader of the Ennahda movement, the largest party in the now-suspended Tunisian parliament, also confirmed Bouziane's death in a post on his official Facebook page, saying that the deceased "left behind two daughters and a son", and was subjected to extreme violence.

'The state is run by a police and security mentality... Tunisia has devolved into a country that suppresses freedoms'

A forensics report is yet to be released to determine the exact cause of death, but the public prosecutor has launched an investigation into the case.

Bouziane was one of thousands of demonstrators who marched on Friday in commemoration of the 11th anniversary of the Tunisian revolution, calling for the restoration of democracy following Saied's power grab last July in what opponents have described as "a coup against the constitution".

Protesters were met with teargas, water cannons, sound bombs, batons and a heavy police presence in the vicinity of Avenue Habib Bourguiba, which effectively blocked them from reaching the area that has been the focal point of demonstrations since the 2011 revolution.

Around 35 people were arrested on charges of violating the coronavirus-linked curfew and the ban on all indoor or outdoor gatherings, which were announced on 11 January - ostensibly to stop a new Covid-19 wave.

A number of the detainees were later released, while others remain in custody on outstanding warrants, including Ahmed Boukados, whose brother Abdel Raouf Boukados was killed during the 2011 uprising.

In a press conference held at the headquarters of the Tunisian Journalists' Syndicate on Friday, Noura Boukados denounced her brother's arrest, emphasising that he "participated in a peaceful march" and condemning the manner in which he was apprehended by three security forces agents, as evidenced by photos shared across various social media platforms.

"My first brother is a martyr," she said. "Was his blood shed in vain? My second brother came to commemorate the revolution that elevated Kais Saied to the presidency. Saied has no right to stop him."

Tunisia run by 'a police mentality'

The crackdown on demonstrators has drawn condemnation from a number of human rights groups in the country, with 21 organisations issuing a joint statement on Tuesday, denouncing what they call a "police repression approach".

"The state is run by a police and security mentality... Tunisia has devolved into a country that suppresses freedoms," said Yassine Jelassi, president of the Tunisian National Union of Journalists.

The joint statement expressed the organisations' outrage at the police repression directed at demonstrators on Friday, describing it as a "disgrace to the revolution's anniversary".

"This repression demonstrates the authority's desire to exert control over Tunisia through undemocratic and civil mechanisms that will only serve to inflame anger toward the security establishment and exacerbate the citizen-state crisis," it added.

Saied plunged Tunisia into chaos on 25 July when he seized vast powers in a plot leaked to Middle East Eye two months earlier. The president cited skyrocketing unemployment, rampant corruption and the coronavirus pandemic as reasons to suspend parliament, sack the prime minister, and grant himself prosecutorial powers.

Last month, he extended the suspension of parliament, announcing that a referendum on constitutional reform would be held in July 2022, followed by parliamentary elections in December. The move has been rejected by the majority of political forces, including the country's largest workers' union, the UGTT.

On Tuesday, Saied also announced that he was extending the state of emergency by a month, until 18 February. 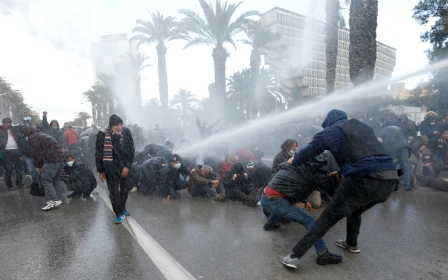 Arab Spring
Tunisia: protesters mark the anniversary of the revolution 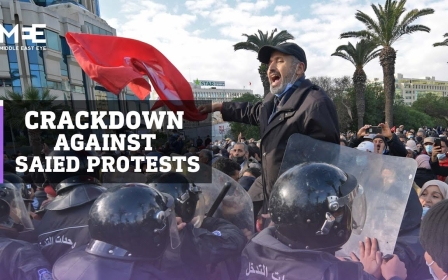