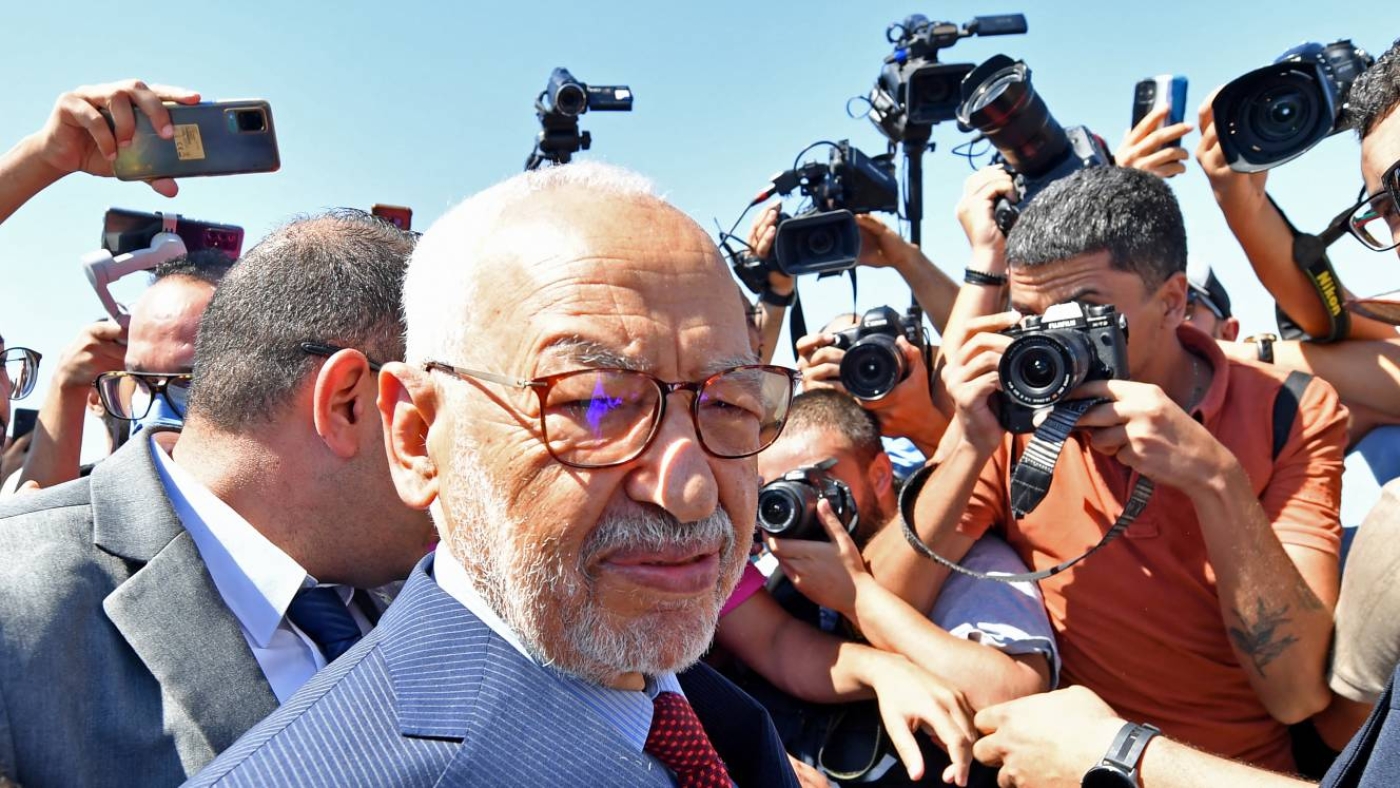 Rachid Ghannouchi, the speaker of the dissolved Tunisian parliament and leader of the Ennahda movement, appeared on Tuesday before a court in a money laundering probe, which critics have described as politically motivated.

Surrounded by around 200 Ennahda activists, Ghannouchi arrived at the headquarters of the anti-terror centre smiling and gesturing a V-sign before entering the building.

Ennahda activists were carrying placards, one of which read "stop political trials," while almost 20 security vehicles were stationed in the area.

The 81-year-old was summoned by an investigation judge to answer questions over allegations of corruption.

The summons comes less than a week before Tunisia is set to hold a referendum on a new constitution, which would focus more powers in the hands of President Kais Saied, who has been accused of staging a "constitutional coup" since July last year.

Ghannouchi has been under investigation since June on allegations of money laundering linked to foreign funds sent to an Ennahda-linked civil society organisation called Association Namaa Tunisia.

Ennahda and Ghannouchi deny any wrongdoing, insisting the leader has not received money from the group and that he has made his financial assets available for review since he first took public office.

He said in a statement on Tuesday, "the malicious charges fall within the framework of passing a constitution that enshrines tyranny".

He added that he had been tried and imprisoned during the tenure of two former presidents, Zine El Abdine Ben Ali and Habib Bourguiba, and was also now "subjected to the worst forms of injustice".

Namaa Tunisia is a small group aiming to form a network of entrepreneurs from Tunisia and abroad to work on business opportunities and find investments in the country. It was founded in March 2011, and Ghanouchi has not been a member of it, nor does Ennahda has any financial dealings with the group.

Critics say the case againt Ghannouchi is politically motivated and fear that Saied could use it to issue an arrest order against him.

Ghannouchi, Tunisia's main opposition leader, has become an outspoken critic of Saied since his power grab last year, in which he dismissed parliament and gave himself wide-ranging powers.

He has ruled by decree since last summer, increasingly moving towards a "one-man rule" and vowing to remake the political system.

The measures, the plans for which were first revealed by Middle East Eye, have been widely considered a setback for the pro-democracy revolution of 2011. Jebali was arrested for four days last month as part of the same investigation and is due to face questioning on the allegations on Wednesday.

Earlier this month, a Tunisian court froze the financial assets of Ghannouchi, Jebali, Abdessalam, and 10 other people involved in the case and imposed a travel ban on them.

Samir Dilou, Ghannouchi's lawyer, denied any connection between Ghannouchi and Namaa Tunisia in an interview with London-based Arabi21 news website.

"Ghannouchi has nothing to do with this association, as he is neither a founder, nor a member, nor a benefactor," Dilou said, warning that there is no legal justification for issuing an arrest warrant against the Ennahda leader.

The Ennahda movement said in a statement that the Namaa Tunisia's case "aims to liquidate political opponents and frighten people from the consequences of the failure of the referendum on a new constitution called for by Tunisian President Kais Saied."

It denounced "the insistence of the coup authority to put the name of its president, Rachid Ghannouchi, in a case that has no financial relations with any of the persons mentioned in it."

"Ghannouchi declared his properties, and his banking transactions are legal. He did not receive any money from any external or internal party, including the Namaa Association, the subject of the judicial investigation, and he did not make any financial transfers for the benefit of any association," the movement added.

Namaa Tunisia's legal team denied the money laundering charges against it, saying that "the slander against it came for political goals by the authority".