Turkey has asked Russia for help in getting Libyan military commander Khalifa Haftar to respect a ceasefire initiative called for by Ankara and Moscow on Wednesday.

"We are waiting for our Russian friends to succeed in convincing Haftar," Foreign Minister Mevlut Cavusoglu told a news conference.

In a statement read by his spokesman Ahmad al-Mesmari, Haftar claimed that a revival of the political process and Libya's stability could only be assured by the "eradication of terrorist groups" and the dissolution of militia controlling Tripoli.

Haftar's position did not amount to a rejection of the ceasefire initiative, but rather "conditions that must be fulfilled" ahead of any truce, an adviser to Haftar later told AFP.

Haftar's forces in April launched an offensive against the capital, seat of the UN-recognised Government of National Accord (GNA). Turkish President Recep Tayyip Erdogan and his Russian counterpart Vladimir Putin called for a ceasefire on Wednesday in Istanbul.

Cavusoglu accused "regional nations" - a reference to Arab countries backing Haftar and also to France - of opposing a ceasefire.

"France is looking for any means to sabotage any initiative which it is not party to," he said.

Turkey last week started deploying troops in Libya to back the GNA led by Fayez al-Sarraj.

Cavusoglu also said on Saturday that in Syria a new ceasefire brokered by Ankara and Moscow was due to come into force after midnight on Sunday morning in Idlib, the last rebel bastion in Syria's northwest.

"We hope that it will be lasting this time and that Russia will be able to control the government forces," he said.

Russia is a key backer of the Syrian government of President Bashar al-Assad.

The Syrian conflict began in March 2011 and has claimed more than 380,000 lives and displaced millions. 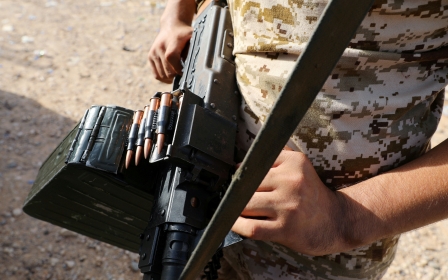