Turkey has officially announced the discovery of a large natural gas reserve in the Black Sea that could satisfy the country's gas needs for nearly seven years.

Turkish President Recep Tayyip Erdogan, in televised remarks watched with great interest across the nation, revealed that the gas reserve was as big as 320 billion cubic metres and was the largest such discovery in Turkey's history.

Erdogan said that his government was planning to present the gas to use in 2023, marking the 100th anniversary of the Turkish republic.

“Energy has an important role in obtaining national independence. We have a brighter future with the discovery of this gas field. We will leave a better country to the upcoming generations,” Erdogan said.

He added that the reserve was named Sakarya, after Turkey's third largest river, located in the Black Sea region and the site of the battle that determined the fate of the independence war in August 1921.

“We expect that we will discover more energy in wells near Sakarya,” Erdogan said.

The Turkish government has purchased three drilling and two seismic ships to conduct its own energy exploration and drilling since 2010. Ankara’s energy exploration efforts in the Eastern Mediterranean have put it on a collision course with neighbouring countries.

Turkey consumed roughly 45 billion cubic metres of gas in 2019, almost 99 percent of it in imports, according to government reports. The estimated cost for the imports is $12-13bn every year.

A Turkish official told Middle East Eye on Thursday that the gas discovery would put Turkey in an advantageous position in future negotiations over gas imports from Russia, Iran and the US.

"This will have some impact on the Eastern Mediterranean as well since this will eventually dwarf the Leviathan gas field in Israel," the official said. "For Israeli gas, the best route is going through Turkey. And Greek plans to use the gas against Turkey as a regional front will fail."

Turkey has recently been diversifying its energy sources, decreasing the Russian share in gas imports from 52 percent to 33 percent in the last three years. Turkey has been purchasing more US and Qatari liquefied natural gas to replace imports from Russia and Iran. 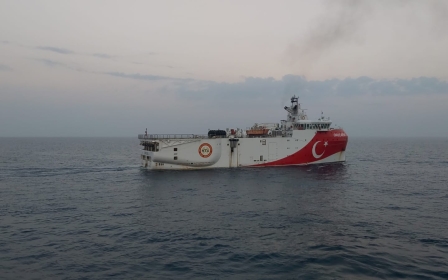