Tourism ministry says it will support businesses hit by operator's bankruptcy, with Tunisia and Egypt also among those affected 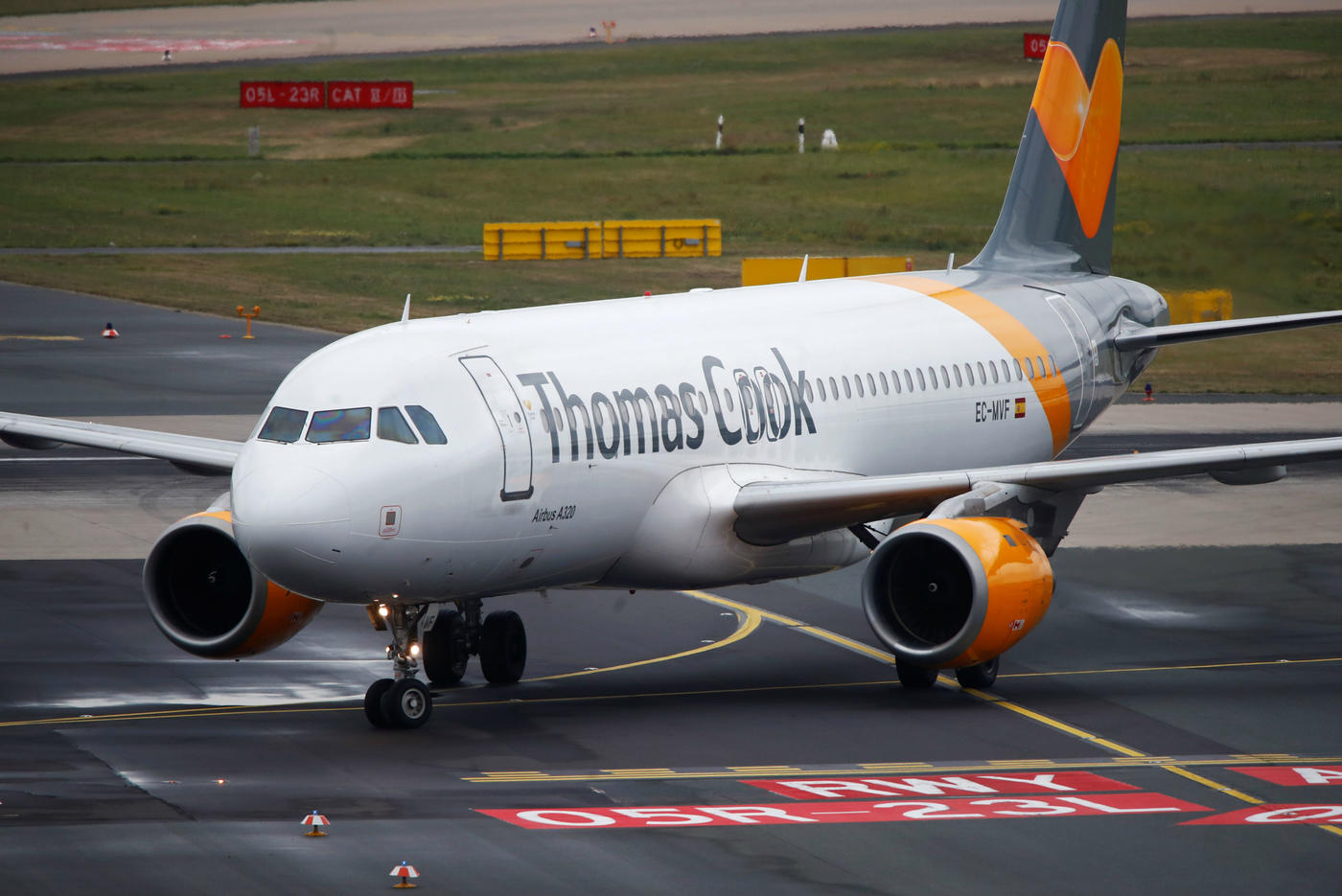 The 178-year-old British operator failed to get a last-ditch rescue deal over the weekend, leaving 150,000 tourists stranded worldwide (Reuters)
By
MEE and agencies

Turkey's tourism ministry has said that hotels who demand payments from tourists or evict them due to the collapse of the British tourism agency Thomas Cook will be prosecuted.

The ministry said there were 21,033 Thomas Cook customers currently in Turkey, and that their expenses would be covered by the UK's Air Travel Organiser's Licence (ATOL) protection.

The head of Turkey's Hoteliers Federation said on Monday that the British operator's collapse means Turkey could see 600,000 to 700,000 fewer tourists annually.

The tourism ministry said it would support local businesses impacted by the bankruptcy.

Turkish Culture and Tourism Ministry warns hotels in Turkey: If you demand payments from tourists or evict them from their hotel rooms due to #ThomasCookCollapse, you will be prosecuted. https://t.co/TQExCGbZ27

"The tourism and finance ministries are working on a 'credit support package' to be put in place as soon as possible to help [affected] businesses," the tourism ministry said on Twitter.

Antalya in Turkey was one of Thomas Cook's top destinations, along with Bodrum and Dalaman.

The 178-year-old British operator failed to get a last-ditch rescue deal over the weekend and declared bankruptcy on Monday, leaving 600,000 tourists affected worldwide.

Some 150,000 of those passengers are Britons seeking help from London to return home.

Thomas Cook will be sold as a whole or in parts after its collapse, the company's second-largest shareholder said on Monday, adding he would see what is offered before deciding whether to buy more assets.

Neset Kockar, who holds an eight percent stake in the UK-based travel firm, said Thomas Cook owes "a few hundred million pounds" to Turkish businesses that may not be paid after it is sold.

Kockar is also the chairman of Turkey-based Anex Tour, which caters mainly to tourists from countries such as Russia and Ukraine.

The UK's Civil Aviation Authority (CAA) said Thomas Cook's four airlines would be grounded and its 21,000 employees in 16 countries, including 9,000 in the UK, will lose their jobs.

The CAA said the government had a fleet of planes ready to bring home British customers over the next two weeks and they should not go to the airport until they had been informed they were due on a return flight.

The British regulator is also contacting hotels hosting Thomas Cook customers to tell them that they will be paid through the ATOL scheme.

Thomas Cook operator Blue Sky Group said on Monday that 25,000 reservations in Egypt booked up to April 2020 had been cancelled.

The company was expecting 100,000 tourists to visit Egypt via Thomas Cook in 2020, the statement added.

"I will have a meeting on Tuesday with the British Embassy in Tunisia and the hotel owners to see how debt could be redeemed," Trabelsi said.

Thomas Cook’s collapse may prove lucrative for some, with hedge funds set to cash in on as much as $250 million https://t.co/Kn3VswZnIR

Tourism is a vital sector for Tunisia's economy and a key source of foreign currency, and the government had expected another 50,000 Thomas Cook customers to visit this year, he added.

Major European tour operators only started to return to Tunisia last year after 39 tourists, mostly British, were killed in an attack on a beach in Sousse in 2015, and 21 people died in an attack on the Bardo National Museum in the capital Tunis in the same year.

Tourism accounts for around 8 percent of Tunisia's economy and employs 400,000 people.

It had expected to receive a record nine million tourists by the end of 2019 after recovering from the impact of the 2015 attacks.

Meanwhile, British tourists in Tunisia said their hotel stopped them leaving for several hours on Saturday night over concerns about outstanding payments from Thomas Cook, though the Tunisian government said the incident was a misunderstanding.

Gary Seale, a guest at Les Orangers Hotel in Hammamet, posted on Facebook: "Security have refused to let us out of the hotel and barricaded us in."

He later posted that he reached the airport later on Saturday and flew home on Sunday.

The company said on Twitter on Sunday it would refund customers who paid on their credit cards for their hotel before leaving Tunisia and would not be sending any new arrivals to Les Orangers.

Tunisia's tourism ministry on Sunday attributed the incident to a "misunderstanding" and said the tourists had been able to leave on the flight on which were originally booked.

"Fourteen tourists were asked to wait a few minutes to confirm with the representative of Thomas Cook... and quickly got the agreement, and the tourists left and travelled on time last night," the ministry said in a statement.