Turkey has sent more troops to northwestern Syria in a move that underscores Ankara's growing concerns about a government offensive on the region, days before a meeting with the leaders of Iran and Russia, Bloomberg News reported.

Idlib province is the last remaining stronghold of Turkish-backed rebels and the opposition. It is also home to 3.4 million Syrians, around two million of whom have taken refuge in the province due to fighting elsewhere in the country.

Ankara is concerned that a Russian-backed government offensive on the heavily populated region could trigger a new surge of refugees at its border at a time when public opinion in Turkey has turned wary of hosting more refugees.

Sources told the National that Erdogan was expected to raise the issue of the escalation in Idlib when he meets Russian President Vladimir Putin and Iran’s President Ebrahim Raisi on 29 September.

Under a 2016 agreement, the European Union paid Turkey billions of dollars to host Syrians fleeing war and looking to settle in Europe. Since then, Turkey has been accused of “weaponising” refugees for political means by threatening to open its borders to Europe.

Any stream of Syrians across Turkey's southern border would come as it faces the possibility of more refugees arriving in the country from Afghanistan following the Taliban takeover.

Speaking at the UN General Assembly on Tuesday, President Recep Tayyip Erdogan addressed this issue and expressed his frustration with the lack of support from the international community on the refugee issue. "As a country that saved human dignity in the Syrian crisis, we no longer have the potential nor the capability to observe new immigration influxes," Erdogan said. "It is high time for all the stakeholders to do their part on this issue.”

A shaky ceasefire agreement reached by Russia and Turkey in March 2020 that turned Idlib into a “de-escalation zone” has come under strain, with Syrian government forces increasing their air and ground bombardments of rebel positions in recent weeks.

The Turkish-backed Free Syrian Army (FSA) and the militant group Hayat Tahrir al-Sham (HTS) - which are both based in Idlib - have also intensified their attacks on government positions.

Turkey maintains a string of military bases scattered around Idlib province. It has been accused by Russia of not abiding by the terms of the ceasefire and not doing enough to route out militant groups within Idlib.

Earlier in September, an attack on Turkish troops in Idlib province left two soldiers dead and three others wounded. Turkey likely hopes that the increased troop numbers would deter an assault on the province.

But Syrian President Bashar al-Assad, who controls about 70 percent of the war-ravaged country, has said he aims to take back all remaining foreign-held territory and has long had his sights on Idlib.

In a meeting with his Syrian counterpart earlier in September, Putin said that the presence of foreign troops in Syria, including US and Turkish troops, was Syria's "main problem", as he called for them to withdraw. 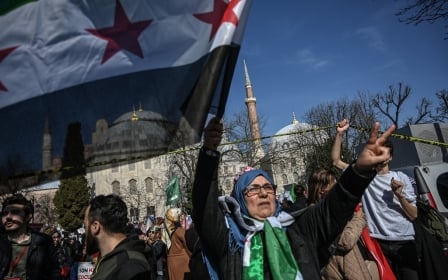 Syria War
Covid-19: Putin self isolating after meeting with Assad in Moscow