Turkey's military has fired artillery shells at a Kurdish armed group in Syria that is backed by the United States but deemed a terrorist group by Ankara, state-run Anadolu news agency has reported.

The shells targeted "shelters" of the Kurdish People's Protection Units (YPG) east of the Euphrates River in the Kobane region of northern Syria on Sunday, Anadolu said.

The move comes two days after President Recep Tayyip Erdogan issued what he said was a "final warning" to those who would endanger Turkey's borders, saying Ankara was determined to focus its attention on Syrian Kurdish fighters east of the Euphrates.

The bombardments also come a day after Erdogan hosted a summit in Istanbul on the Syrian conflict with the leaders of Russia, France and Germany, in which they adopted a joint statement committing to work "together in order to create conditions for peace and stability in Syria".

The strikes targeted YPG positions and trenches on a hill near the eastern bank of the Euphrates, across the river from the city of Jarablus, AFP news agency reported.

The YPG, which has been a key ally of the US in the fight against the Islamic State group, took control of large areas of northeast Syria in 2012 as government forces pulled out to fight rebels in the west

However, Ankara is bitterly opposed to the group, regarding it as an extension of the Kurdistan Workers' Party (PKK), which has waged a deadly insurgency in Turkey since 1984.

The PKK is designated as a terrorist group by Turkey and its Western allies.

Washington's support of the YPG remains a major point of contention between the US and Turkey, NATO allies who have seen relations deteriorate over the last two years.

Both oppose Syrian President Bashar al-Assad, but Turkey's military incursions have recently focused more on Kurdish fighters near its border.

Turkey has launched two offensives west of the Euphrates since 2016 to repel "radical" fighters from its border and prevent zones under YPG control from joining.

The offensives include an operation against YPG forces in northern Syria's Afrin region earlier this year, which saw thousands of Kurds displaced from their homes. 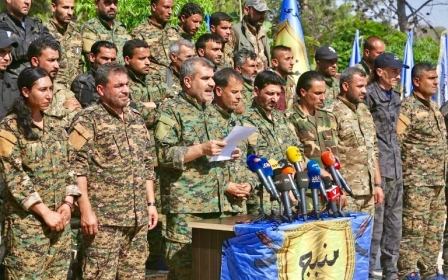