Forces belonging to the Syrian government and Turkey came within a stone's throw of one another on Friday, as President Bashar al-Assad's troops surrounded a Turkish observation point in Syria's Idlib province.

Far from friends, the forces' proximity has heightened tensions even further amid a Syrian government offensive into territory held by rebels backed by Turkey.

Erdogan told Putin that the Syrian government's assault had caused a major humanitarian crisis and undermined efforts to find a solution for the Syrian crisis.

"These attacks have become a very serious threat to Turkish national security," Erdogan said in the phone call, according to a readout released by the Turkish presidency.

The Kremlin, on the other hand, said the two leaders agreed to activate mutual efforts with the goal of "liquidating terrorist threats coming from this region".

Erdogan is set to travel to Moscow to meet Putin on Tuesday, a government source told MEE, and is also expected to talk to US President Donald Trump about the situation.

Turkey has backed rebel groups in Syria since the revolution against Assad's rule erupted in 2011.

Ankara has a significant military presence in parts of northern Syria, including in about a dozen observation posts surrounding rebel-held Idlib province, and Turkey hosts some 3.5 million Syrian refugees.

'We stay put for now'

Turkish reports say about 70,000 civilians fled the area towards the Turkish border.

Officials in Ankara are unusually silent about the fact that a Turkish military base is now isolated and its convoy is still standing where it was stopped by bombardment on Tuesday, exposed and without any proper cover. 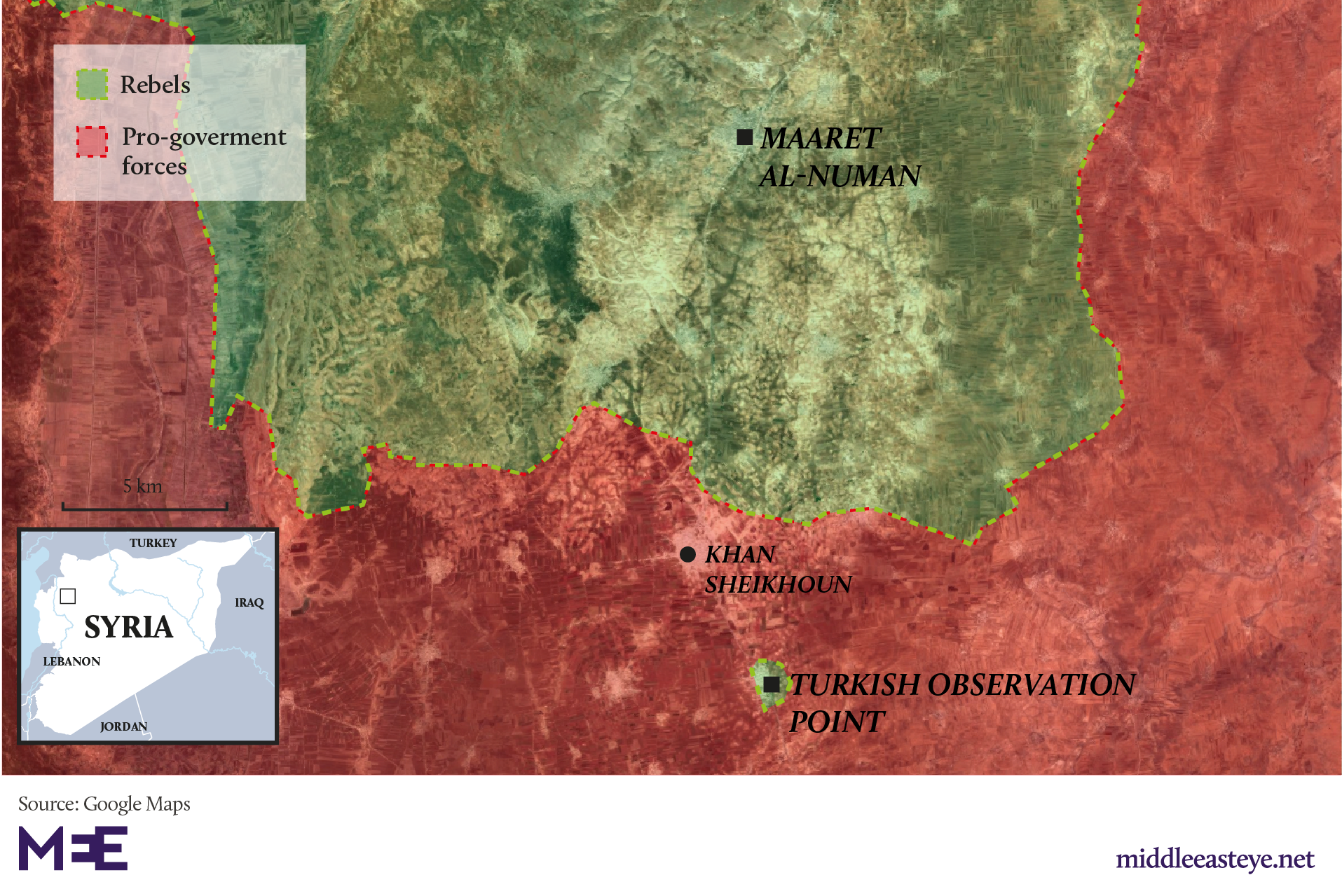 Unverified pictures circulating on social media showed that Assad's forces are now a selfie-taking distance from the base.

Turkish Foreign Minister Mevlut Cavusoglu said on Friday that Turkey would not relocate the base and Damascus would not dare attack it.

"We stay put for now. The base won't be evacuated. The convoy won't return home," a Turkish official anonymously told Middle East Eye.

Turkish officials point out that the situation on the ground remains fluid and the next round of a trilateral meeting between Turkey, Russia and Iran on 16 September will be important to lay down the next steps.

Meanwhile, Turkish media reported that Turkey's military has been sending additional reinforcements to some of its bases in northwest Syria to prop up defences against the government onslaught.

Adding salt to the Turkish wound, Kremlin spokesman Dimitry Peskov told reporters on Thursday that the world should welcome Syrian government "counterterror operations" in the area.

Russian officials have, meanwhile, acknowledged that their forces were on the ground in the northwest and were accompanying pro-government forces.

A source close to the Turkish government said the future of Idlib was bleak.

Nearly 1,000 civilians have been killed since Damascus began its assault on the rebel enclave in April, according to activists, and rebel defences have collapsed in recent days with Assad's forces making significant gains.

"No matter what Turkey says, it will be forced to abandon the post," the source said, speaking on condition of anonymity due to the sensitivity of the subject.

"Russia has a new map in mind, in which the opposition forces would be squeezed to the border, where camps for refugees can be set up."

The source said the only solution might be a new understanding between Putin and Erdogan that could give room to Turkey.

'No matter what Turkey says, it will be forced to abandon the post'

"Ankara is trying to buy time by announcing that it won't relocate the base. However, the regime has the momentum, and it will continue to seize more territory until a new Idlib understanding emerges with Russia in the 16 September talks," the source said.

Last year, a Russian-Turkish agreement created a de-escalation zone in northwest Syria in a bid to avert a full-blown government offensive against the last opposition-held enclave in the country.

Earlier this week, Turkish Interior Minister Suleyman Soylu​​​​​​ told journalists in Istanbul that Turkey was under huge pressure due to the arrival of new refugees in the country.

"We welcomed 70,000 Syrian refugees this year alone. We have plans to set up refugee camps in Idlib, and we have prepared for three different scenarios in case of a major collapse of the ceasefire agreement," he said.